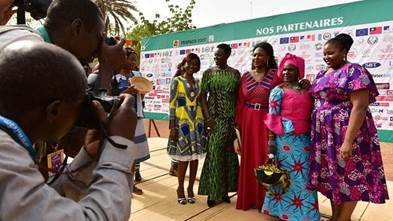 Competition will be fierce among the 163 film entrants, all hoping to win the Etalon de Yennenga (Stallion of Yennanga) – the top prize. Another 50 films will be shown out of competition.

This year’s film-going crowd was lined up to see Frontieres, an African road movie about four women – Ivorian, Senegalese, Burkinabe  and Nigerian actresses – crossing four countries by bus on their way to Lagos, Nigeria. During their trip, they discover the beautiful landscape of the Sahelian and coastal countries. However, the trip is a journey of struggle. Under the grueling sun, they’re beset by customs officers, thieves, murderers and rapists.

“The film deals with the bravery of women,” director ApollineTraore told the French news service AFP. “There is a tendency to portray women, particularly African women, as housewives, sweet gentle women. But it is important to show another side,” the Burkinabe director said.

Financed with public funds and by a French telecoms group, the film will be distributed throughout French-speaking Africa and in Europe,

At the opening ceremony, the name of Thomas Sankara was invoked over and over while koras and marimbas played to the Burkinabé dignitaries in the country’s municipal stadium, all sweltering in the 90-degree heat.

Sankara was the country’s popular leader, assassinated in 1987 by Blaise Compaoré, his best friend.

More than 100,000 revelers are expected to attend the ten-day fest –  the first since the overthrow of the disgraced Compaoré in 2014, and the first since last year’s terror attacks on various hotels and restaurants.

Workshops on ways to support independent African film and train cinematographers are set to take place all over Ouagadougou this week.

“We could do with many more film festivals in Africa,” said Nigerian filmmaker and poet Wana Udobang in an interview with The Guardian. “Here people get to see different kinds of films so you don’t have this monolithic idea of what African film is.”

As Africa’s most talked about film festival got started, Moonlight was making history a world away, capturing “Best Film” at an Oscar night that carried more than a few surprises.

Peace Anyiam-Osigwe, director of the Africa Movie Academy Awards in Nigeria, shared her excitement about the American film.  “One, because of its story, and second, the fact this was not a huge US budget film – it’s a $5 million film that actually won Best Picture, so for us in Africa, it holds a lot of hope,” she said. w/pix of Frontieres stars