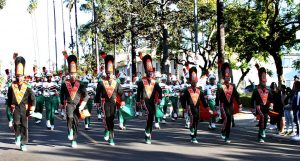 More than 200 members of Florida A&M University’s (FAMU) Marching “100” performed outside of First AME Church of Los Angeles on Dec. 30, prior to their scheduled January 1 performance in the Tournament of Roses Parade. ... read more »
Breaking the Gubernatorial Glass Ceiling

In the 240-year history of the United States, four African American men have presided as the chief executive of a state or commonwealth. Only two were elected in their own right – Deval Patrick of Massachusetts, in 2006, and Douglas Wilder of Virginia, in 1989. David Paterson of New York was elevated to the office upon the resignation of Eliot Spitzer in 2008 ... read more »