Atlanta Mayor Keisha Lance Bottoms addressed Democrats on Aug. 20 during the final night of the Democratic National Convention. The coronavirus pandemic upended both parties’ traditional conventions. Instead of in-person events, the program each night features a number of speakers and musical performances virtually across the country. ... read more / watch video »
Keisha Lance Bottoms’ Full Remarks at the 2020 Democratic National Convention 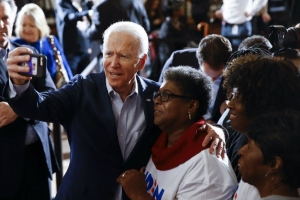 FORMER PRESIDENT BARACK OBAMA  “Considering his enormous impact on the history of this country, what always struck those who met John was his gentleness and humility. Born into modest means in the heart of the Jim Crow South, he understood that he was just one of a long line of heroes in the struggle for racial justice. Early on, he embraced the principles of nonviolent resistance and civil disobedience as the means to bring about real change in this country, understanding that such tactics had the power not only to change laws, but to change hearts and minds as well.”  ... read more »
REVIEW: HBO’s Atlanta’s Missing And Murdered: The Lost Children —a disturbing look the death of 30 African American children

Atlanta's Missing And Murdered: The Lost Children is a five-part documentary series offering an unprecedented look at the abduction and murder of at least 30 African-American children and young adults in Atlanta between 1979 and 1981.     ... read more »
Rev. Dr. Joseph E. Lowery Laid to Rest at Private Family Funeral

A public memorial will be held on Tuesday, Oct. 6, 2020, which would have been Dr. Lowery’s 99th birthday, with the hope and prayer that this pandemic will be behind us. This celebration will ensure friends and supporters from near and far can honor Dr. Lowery and his legacy, together as a community, in a manner that he so rightfully deserves. ... read more »
ADVERTISEMENT
Videos
WATCH: Black Money Matters Ep. 5: Black Business Feature: 1010 Wine