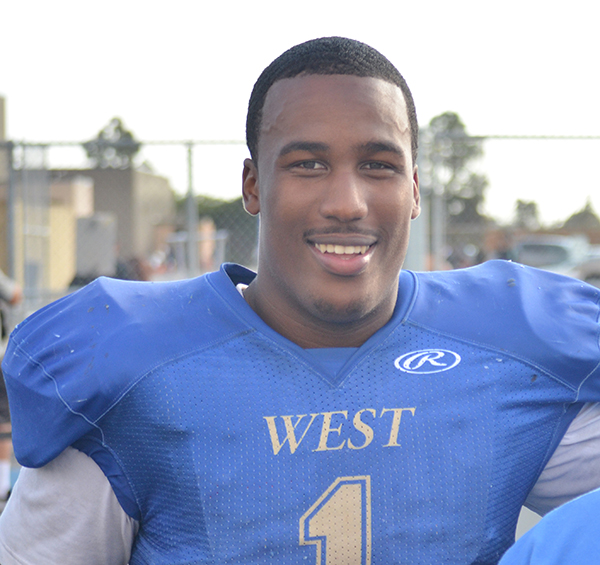 Markell White has a 3.6 GPA and intends to major in fire technology (Amanda Scurlock/L.A. Sentinel)

Being a quarterback for the West Los Angeles College Wildcats football team gives him skills that will help him with his football career and beyond. His leadership and decision-making skills can help him pursue his passion of being a firefighter.

Since his high school years at Fairfax, White has worked as a cadet at a fire station. Choosing a profession that helps people runs in his family.

“My mom has been in the medical field, she was a nurse. My great grandfather, he served in the Vietnam war,” White said.

The atmosphere at West L.A. has assisted White to focus, having teammates and classmates that are older or have children helped him to focus on excelling.

“When it comes to taking care of business, there’s no playing around,” he said. “Having my surroundings be adults and parents, they know how to act and what to do, so it definitely helped me mature as a person.”

White made a season high of 13 rushes and 67 yards during the Wildcats’ 12-48 loss against Golden West College. In a 29-12 victory against Glendale Community College, he made three touchdowns.

White has a 3.6 GPA, his favorite class is Child Development.

“It may sound like an easy class, but I definitely learned a lot about parenting skills,” he said. “By me learning what I learned in Child Development, it kinda helped you understand why certain people are where they are.”

White plans on majoring in fire technology. He was interested in firefighting at a young age, discipline has been a key lesson he learned from being a cadet.

“This job, I definitely learned that when it comes to medical issues and injuries, literally every second counts,” he said. “It’s basically your second home, you’re at the state and you got to do chores like you’re at home.”

Working as a Cadet, White has helped several victims of car accidents and other incidents. This taught him how to appreciate his life, it also aided him as a student athlete.

“My main priority is knowing everything that’s going on on that field, so it definitely helped me understand more,” he said. “As a quarterback and even as a Cadet, you take all the information you can and go with it and learn with it.”

In 2015, White helped the Lions win the Division II City Section Championship. He collected 116 yards from 17 carries and completed three passes for 66 yards in their 31-16 victory over the Los Angeles Romans.

“A lot of people go to high school and not have a chance to leave with a championship,” White said. “Now I see why it brings people to tears because you work so hard in the offseason and so hard all year, you don’t spend time with your family or see your family that much because all your time is into this sport.”