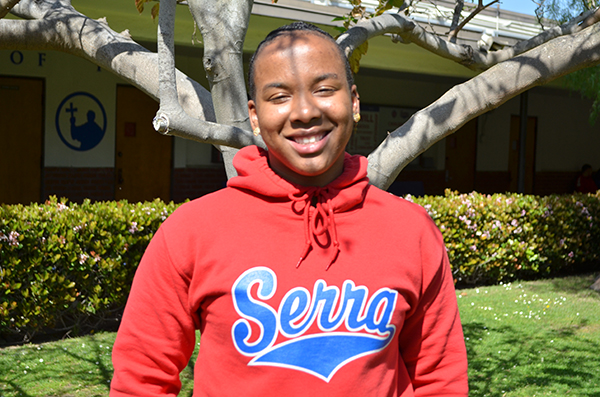 Serra Cavalier senior forward Lauryn Pointer is more than a member of the Division I state championship-winning girls basketball team. Her obligations go beyond the hardwood as Pointer was elected ASB vice president of the senior class.

Pointer is also a member of Serra’s music ministry, playing the piano and singing for the school’s mass. Being an athlete, a leader, and a musician has not got in the way of her maintaining a 4.1 GPA.

“I kind of wanted to pack my senior year with a lot of things to get me ready for college,” Pointer said. “It’s a lot to juggle for sure, but I got through it.”

For the Cavaliers, Pointer averaged 8.7 points and 5.2 rebounds per game this season. Competing with the AAU team Cal Sparks helped improved her skills.

“Cal Sparks have a lot of competition, they have a lot of players,” Pointer said. “To be able to be part of that and be considered good enough to be on that team, that’s a blessing in itself.”

“Lauryn Pointer is one of the toughest players we’ve ever had,” he said. “She imposes her will on other people, she’s taken more charges this season than any player we’ve had in program history.”

Goals that she set out for herself were to put forth a consistent amount of energy throughout games and improve her attitude.

“That kinda progressed through the season,” Pointer said. “I saw the progress in myself and then others [started] to see the progression as well and then it just carried out throughout the whole team.”

Pointer earned a season high of 18 points and 10 rebounds when the Cavaliers defeated the St. Bonaventure Seraphs 78-34, this was her second double-double of the season.

In the last two games, Pointer became team captain. Her experience with ASB helped her with team captain duties.

“It helps with communication skills especially so you know how to come to certain people a certain type of way,” Pointer said. “The organization you need for ASB is the type of organization that you need for basketball.”

Before Pointer began competing in basketball, she had taken piano lessons. As she got older, she learned how to play piano through YouTube tutorials. Being a member of the music ministry helped her become more comfortable with performing in front of big groups of people.

“I kinda have stage fright a little bit, as social as I am,” she said. “At the end of the year now, it’s gotten easier, especially singing too.”

Pointer aspires to win a championship in college and eventually earn a doctorate degree. She also wants to impact lives, go overseas and work as a physical therapist. Through her coaches, she learned how to put her heart into her gameplay.

“If you play with your heart,” Pointer said. “Nobody could really stop you in the end.”

Where Are We in the LACCD?
LAFC Prevail in Back and Forth Match