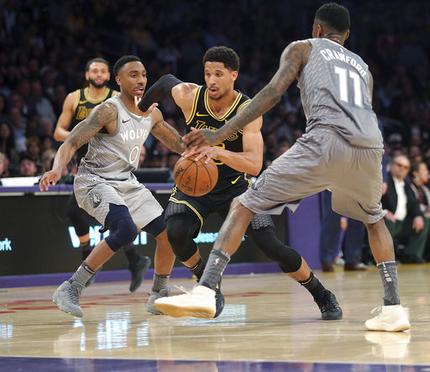 The contending Minnesota Timberwolves keep their Playoff dreams alive earning their 46th victory after defeating the Lakers 113-96. Minnesota ascended out of a four-way tie with San Antonio, New Orleans, and Oklahoma City to tie with 4th seeded Utah Jazz.

Forward Julius Randle and guard Josh Hart led the Lakers in scoring with 20 points each. Hart earned his eighth double-double with 11 rebounds, Randle earned his 28th, making 10 rebounds. This game has marked Randle’s 21st time leading the team in scoring this season.

“He’s so dominant physically and he’s had so much success recently,” said Lakers head coach Luke Walton. “I feel like—if he wanted to—he could just put his head down and get to the rim and score 30 points a night, but we’re asking more of him.”

All the Timberwolves starters scored in the double digits with guard Jeff Teague scoring 25 points. Former Rookie of the Year Karl-Anthony Towns led the glass with 11 rebounds.

“It’s been a tough stretch for us,” Randle said. “Guys are trying to give their effort, we just got to keep competing.”

Forward Kyle Kuzma was taken out of the game after playing for 18 minutes due to a mild left ankle sprain. The rookie sustained an injury on his right ankle back in March but chose to play through it.

Los Angeles did outrebound Minnesota 53-48, but they gave up 30 points from 21 turnovers.

“Some of them were lackadaisical passes, I know I had two, ones where I kind of just threw,” Hart said. “We’re young, but we got to realize that each and every possession matters.”

The Timberwolves went on a five-point run in the first two minutes of the game. Lopez singlehandedly tied the score and carried the Lakers offense, scoring the first 15 points.

“He had a nice rhythm going for himself,” Walton said. “I thought [Lopez]  did a really nice job of kind of going blow-to-blow with them on the offense side.”

The shot selection of Jeff Teague and the iron curtain defense of Towns and forward Taj Gibson gave the Timberwolves the upper hand. Minnesota landed five steals and two blocks, while the Lakers made seven turnovers. Kentavious Caldwell-Pope scored baskets, but the Lakers had trouble defending Minnesota through the first quarter.

There were several foul calls made on both teams in the second quarter. Forward Channing Frye earned a flagrant foul while the Timberwolves sent four different Lakers to the free throw line. Los Angeles would go 16 of 18 from the charity stripe, they led by up to 11 points. Minnesota concluded the second quarter with a 7-2 run but trailed 51-58 by halftime.

Minnesota returned to the court with a vengeance in the third quarter. Guard Andrew Wiggins and Butler would help the Timberwolves gain control of the game. Towns and Wiggins landed three-pointers to edge their lead up by eight points. Josh Hart hit a buzzer-beating three-pointer, bringing the Lakers within seven points. The T-Wolves held the Lakers to 15 points in the third quarter.

“We just played with a lot more intensity,” Towns said. “At halftime, we readjusted ourselves, got more adjusted to how the flow of the game was going and got ourselves in positions that we weren’t doing in the first half.”

The Laker offense froze for three minutes in the fourth, their deficit reached 20 points. Randle and guard Tyler Ennis found a rhythm on offense, but the Lakers still struggled to defend Minnesota. The Timberwolves scored 18 points in the paint, the Lakers could not climb out of their double-digit deficit.

The Playoff-bound Utah Jazz will battle against the Lakers on Sunday at 3:00P.M. Kuzma noted how the Lakers must have intentions to give Utah their 34th loss.

“We just got to come in with that Grinch mentality,” he said. “Just try to steal somebody’s thunder.” 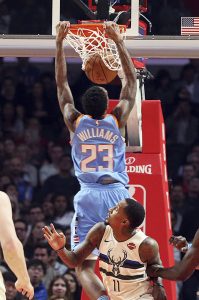