Sen. Bob Huff and Sen. Holly J. Mitchell listen to testimony delivered by community stakeholders and advocates regarding homelessness, sex trafficking and foster care of homeless and exploited women at a “Women and Inequality; Strategies to Promote Opportunity” public hearing. The hearing was held at the Weingart YMCA Wellness and Aquatic Center on Nov. 6 in Los Angeles.

Statistics from the Senate Committee on Women and Equality indicate that 35 percent of women in South Los Angeles are living below the poverty level; that Los Angeles ranks number one in the FBI’s list of cities with the highest incidence of sex exploitation of children; and approximately 18,533 children were living in foster care as of 2015.

“We came to the community to hear from service providers, clients and women who are trying to make a difference for women in South Los Angeles,” said Mitchell, adding that the testimony will impact future policy legislation.

With the number of homeless women increasing in Los Angeles County, Pamela Walls, formerly a client of the Downtown Women’s Center, shared her story of becoming homeless after her landlord issued notices to tenants to evacuate his apartment building.

“I felt helpless and devastated,” recalls Walls, the mother of a teenage son. “We moved in the winter which is the worst time to be homeless. My son and I went from motel to hotel,” said Walls, who ended up living in a shelter.

Walls said she was finally referred to the Downtown Women’s Center, a non-profit organization that helps women find housing and jobs. “They put me in a hotel which was the pathway to better housing,” said Walls, a singer and actress who finally moved into her own apartment.

Walls said that the issues facing homeless women are myriad and many. “We need access to fast track housing, clothing, and help with getting our children out of the courts and the foster care system,” she said.

Sharon Rapport, CEO of the Corporation of Better Housing, said that there are 7,513 homeless people in South Los Angeles and that 44,000 people are currently living in shelters, in cars or in makeshift encampments on the streets.

“Los Angeles is one of the most unaffordable cities in the county,” Rapport pointed out. “Even with a housing voucher, it’s hard for people to find housing in South Los Angeles. With the affordable housing crisis this large, our resources are not keeping pace with the need.

“The legislature could pass AB1335, the Building Homes and Jobs Act, to establish a trust fund that could significantly impact homelessness.  The legislature could work to protect increased benefits. Homelessness is a soluble issue,” Rapport maintained. “We need to connect the homeless with permanent places to live.”

To illustrate how a girl gets “caught up” in the world of sex trafficking, Claudia Pena, co-founder of Repair, an organization that addresses violence, exploitation and inequality, described “Brenda,” who is poor, not able to afford housing, dyslexic and who has little access to food.

“Nobody understands her, she is al l alone,” said Pena. “She is a girl molested by a family member or a pushy boyfriend.”  Pena said that the systems established to protect Brenda have failed her. “Her situation has placed a crack in Brenda’s protective armor.  Each time a piece of her armor breaks off, it makes her even more vulnerable.”

Pena said that “Brenda” eventually meets a pimp. “Every time the system fails her, it proves that her pimp is right,” said Pena. “Everybody on the street is a systems failure. We need funding for organizations to get these women off the streets. We also need to establish a think tank for the survivors of sex trafficking.”

Pena added that schools often “punish” black girls. “They face suspension and expulsion from schools at a much higher rate,” she pointed out.  “They get labeled as trouble makers and then face pregnancy, addiction and health issues.”

Judge John C. Lawson, who presides in the Long Beach Juvenile Court, observed, “Most of the arrests for trafficking are African American girls between 13 and 17 years old, followed by Hispanics. The girls come from households of abuse and neglect—usually from single parent or no parent households and they are often a victim of sexual abuse. They suffer from depression, low self-esteem, and a lack of supervision.”

Lawson said that when the girls come to court, they have been “brainwashed” by their pimps. “They won’t listen to me because I’m in a position of authority,” he observed. “We will often place them in a safe environment and they run away. We need to establish secure facilities to place the girls, but they should not be locked up. It’s also important to try to reintegrate the child with the family.”

Carol Chodoff, director of the Opportunity Youth Collective at Alliance for Children’s Rights, said that the Star program, designed for girls who are victims of trafficking, is working. “This program needs to be expanded,” she said. “As of 2014, the re-arrest of girls was only 5 percent. We must not think of criminalization, but how to protect and heal the child.”

“I deal directly with the survivors of sex trafficking,” said the Reverend Deborah Manns, founder of the Virtuous Woman Ministries, Inc., who said that the girls are recruited from foster youth homes, malls, and at parties.  “Many have faced poverty, sexual assault and abuse in the foster homes. We all have a responsibility to give back,” said Rev. Manns. “It is our job to help the broken.”

“The testimony we heard today helped me to understand the issues a little better,” said Huff.  “The increasing growth of the homeless population is horrific, but hearing about single homeless women on the street is a new concept for me. We need to refashion legislation so that we support and establish programs that hit the most directly impacted.”

Mitchell said that the testimony will assist in influencing state legislation in the future. “I saw that a number of models are working well like the Star program,” she said. “We need to establish intensive training for foster parents and the employees of group homes. We need to rethink our policy making so that we can meet the lowest common denominators impacting those in our community.” 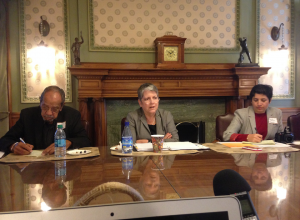 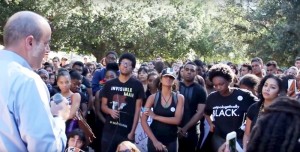 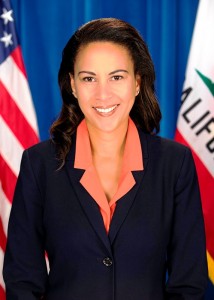 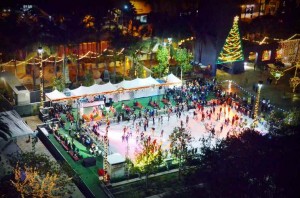 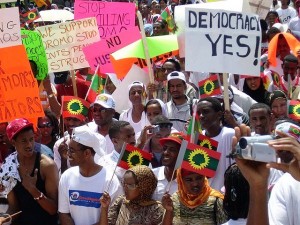 Ethiopians In The U.S. Protest Mistreatment Of Oromos