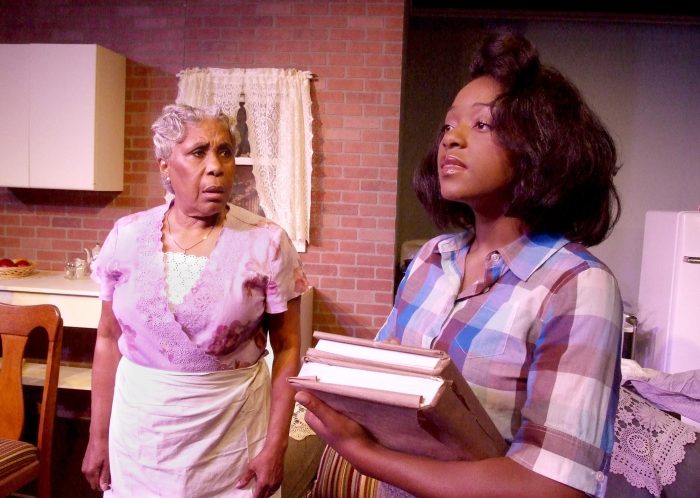 As many thespians and theatre aficionados alike may know, A Raisin in the Sun is a classic screenplay that exudes timeless reality in a poignant display of an African American living in Chicago’s Southside during the 1950s. Showcasing both the stark socioeconomic conditions and racial divides impacting people of color, the play also delves deep into the trials many families face when motivated by money, and the lengths it’s members will go to ensure they acquire a piece of the generational pie.

This time around, the Sentinel trekked over to the Ruskin Group Theatre in Santa Monica to watch the screenplay’s rebirth, which was met by a quaint, intimate setting with quietly dimmed lights. The set stayed true to form, positioning thick-laced coveralls and placemats over the worn kitchen furnishings, newspapers and cigarettes on the small wooden dining table, and an old olive couch doubled as a day bed for Mama’s grandson to sleep on.

Spearheading the play’s 2016 resurgence is Tony-Award nominee and Director, Lita Gaithers Owens. Owen’s directorship reigns in the footsteps of the late playwright Lorraine Hansberry, who wrote and directed the play back in 1959 before her untimely death 6 years later. Various adaptations of the original screenplay were previously birthed in 1961, 1989 and 2008, with Daniel Petrie, Bill Duke, and Kenny Leon serving as directors, respectively.

Owens says that this play is “poetry, is hope, is love, is sadness, all wrapped up in one beautiful package,” and that she would embrace and thank Hansberry “for writing such a timeless piece”. “Everyone can possibly see themselves in this piece because it’s about people who are really trying to do something with their lives, and they want the best for their children,” Owens added. 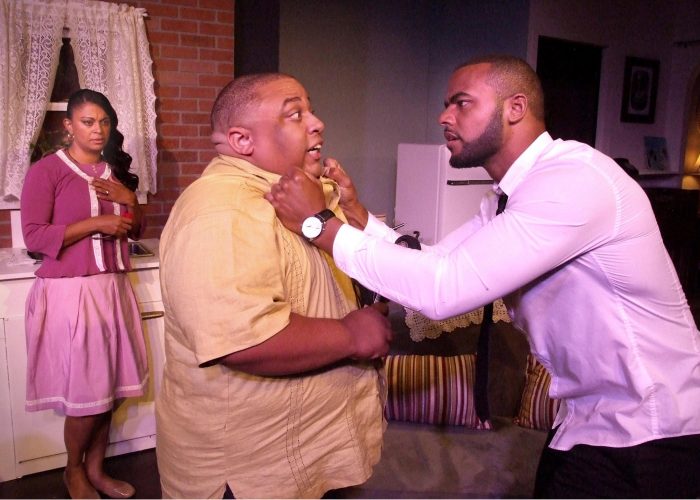 Ruth Younger (Angelle Brooks) watches as her husband Walter Younger (Redaric Williams) reacts to news from Bobo (Jarard Kings) that his father’s savings has been stolen by a mutual friend. (Courtesy Photo)

Also a Tony-Award nominee, critically acclaimed actress Starletta DuPois plays the role of Lena Younger better known as “Mama” in the 2016 adaptation. Ironically, DuPois has circled the screenplay countless times, previously starring in roles as both Ruth Younger and Beneatha Younger in prior performances.

In a one on one interview, DuPois says that she remembers playing Ruth in the 80s, “when they were burning a cross in my home town in Philadelphia.” “You can see all of the vitriolic attitudes and positions today, we’re back right there,” she added.

“Only love will change it, only redemption will change it, and only us coming together and understanding one another. We have to stay open, and we have to not judge. Love is the most powerful force in the world, and forgiveness is the key to the mountain,” DuPois continued.

DuPois’ wisdom is certainly carried throughout the cast of rising stars, with Redaric Williams playing the super charged heroine Walter Lee Younger, Mama’s son, and Charlotte Williams as Beneatha Younger, Mama’s daughter. The siblings, who’ve become accustom to lack, battle over how to use their late father’s insurance money, the entire $10,000 of which their mother is entitled to. 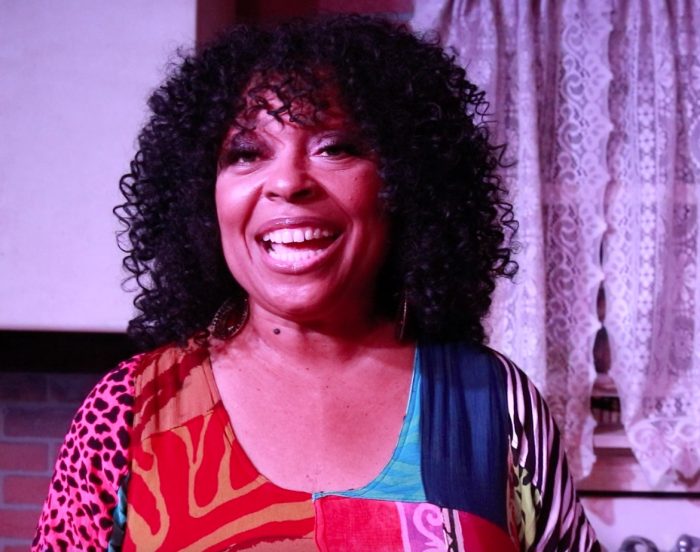 Williams, whose character Beneatha is bold and outspoken about social injustice in the play, says she isn’t surprised at the current social climate of America. “The racism then that was then more obvious is a little more camouflaged now, but it still exists, and playing Beneatha and having a dream, now our society and our young people, some of them are killed for that,” Williams stated.

Meanwhile, Ruth Younger, portrayed by actress Angelle Brooks, struggles to keep her family unified, perplexed at her husband Walter’s heroic plans for financial gain despite their mental and social servitude to poverty. As for their adolescent son, Travis Younger, played by actor Jaden Martin, he brings a jovial spirit to the families’ constant state of internal affairs.

While these issues remain prevalent today, the regeneration of A Raisin in the Sun brought home the importance of family unity in the midst of adversity, and the value of creating generational wealth as an integral part of the African American family dynamic.