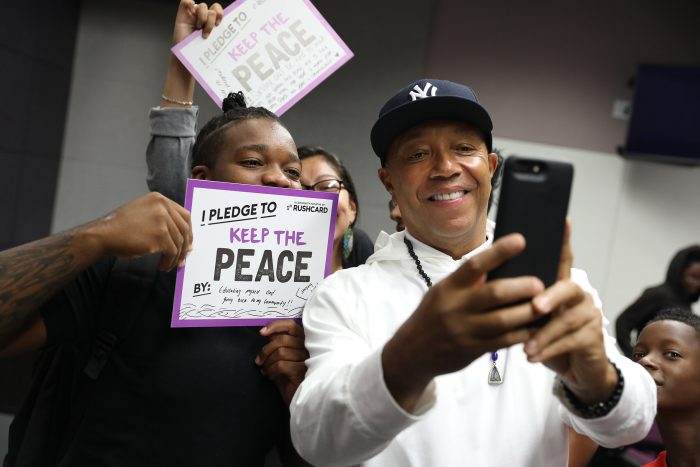 Russell Simmons takes a selfie with a student from the Community Coalition’s Freedom School, during RushCard’s “Keep The Peace” initiative at the University of Southern California. (Andre L. Perry/Los Angeles Sentinel)

We live in an age where polarization is the norm and demonizing anyone who thinks differently is the practice. Yet we still see the Black collective as loving with open arms and aspirations for the best for our families and communities as well as the best for all of humanity.

We continue to be great listeners and doers of good even after we have endured centuries of abuse and continued oppression. We have, by God’s grace, still come out to be a very conscious and resilient people. While those who oppress continue to use our images as the faces of every example of unconscious negative acts from violence to sexual predatory behavior, we have remained steadfast in our exemplification of higher spiritual responses in a world where the norm is that hurt people hurt people.

The black community in America has not lashed out with retribution, violence or hate. We remain the most abused but have maintained a commitment to Dr. King’s principle of nonviolence. As a people we are still the most non-harming collective. Throughout the centuries we have been God-fearing and compassionate. But Scripture says, “faith without works is dead.” We must, as a collective, come together and, where necessary, partner with others who have the same concerns and stand up.

We have all resources, challenges and opportunities. We play disproportionately on social media where modern revolutions are being built. Yet, we mostly are operating on a moral high ground. There are so many issues that need to be addressed. It’s ok because we are capable of changing and rising to the challenges of today.

We must whenever possible support all of our community members who take effective leadership roles. We have great examples like Van Jones, Meek Mills, Jay-Z, and even Kim Kardashian, who are fighting the prison industrial complex and unjust mass incarceration. We should support their efforts and leadership.

Yes, black lives matter, and Tamika Mallory and Benjamin Crump are very visible and effective on the subject of police brutality. Our spirituality and sense of fair play should not extinguish our activism. But instead, our spirituality should be as it always has been: an organizing force for social transformation. Traditionally, it has been the church that has united us spiritually, with a commitment to change the world for the better.

Where are our pastors and spiritual teachers in this moment of struggle? We must look to them to pick up the baton. Yet, we all should be engaged in the ongoing struggles for freedom, justice and equality in America and throughout the world.

We are under attack and prayers will only be answered for those who stand up, work together and take action. With great love, all things are possible.