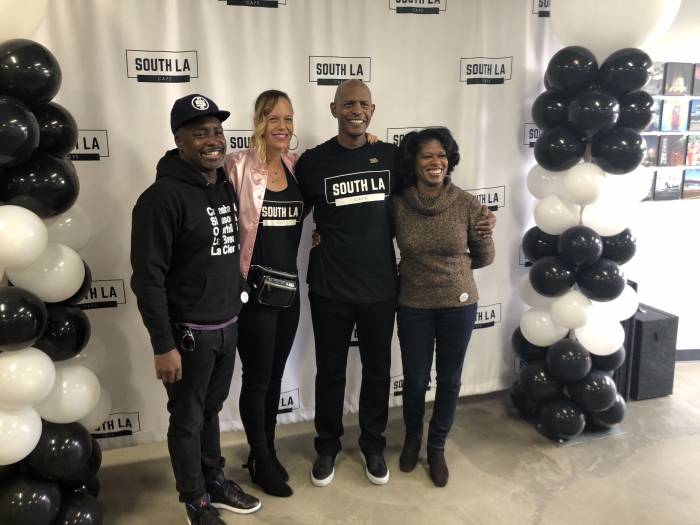 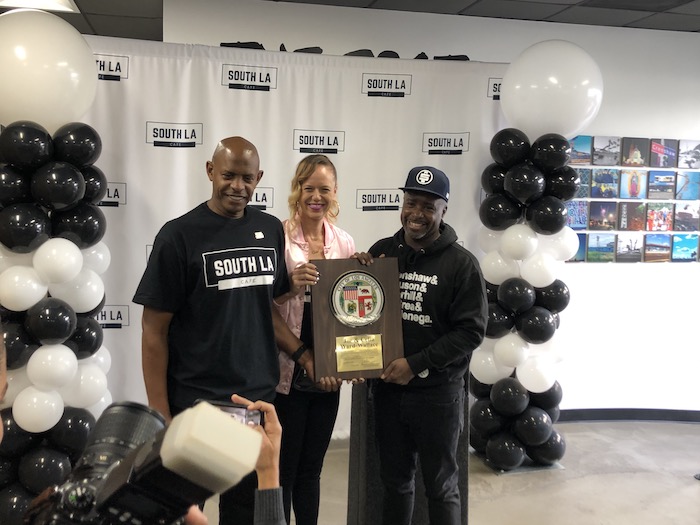 South LA Cafe just recently held a grand opening to open its community-focused coffee shop. A significant win for the culture because they are impacting lives, inspiring others to follow, and bringing more African American ownership in the area. SLAC’s mission is to build for the community, bring people together, provide quality food at affordable pricing. The founders of this establishment are Joe and Celia Ward-Wallace. The Ward-Wallace’s saw a need in the community. It wasn’t that many places in the neighborhood for people to have a comfortable space to build. Imagine having coffee shops that’s community-focused in under-represented areas, and you would see the rise in Black-owned businesses.

There are so many talented, innovative entrepreneurs in our communities, but the lack of resources hinders us from moving forward. SLAC is setting the blueprint of what African Americans should continue to strive for in the city of Los Angeles. There is a lot of gentrification going on, and black people get pushed out of our neighborhoods: it’s a crucial time for us to start investing in the community, and taking control of our destiny. 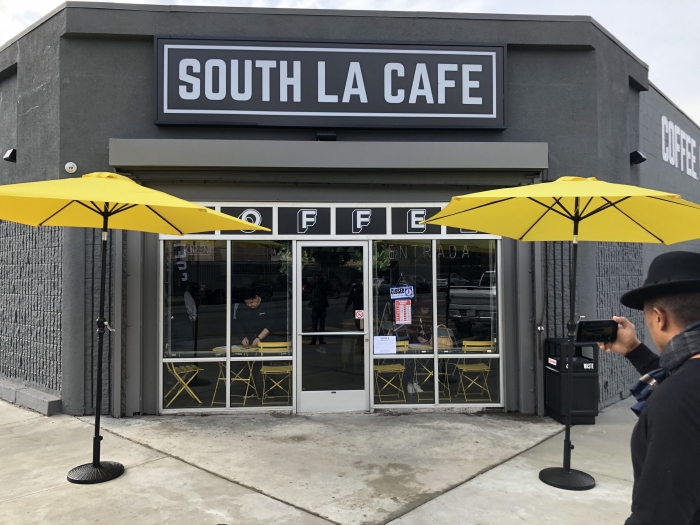 Joe Ward-Wallace said the vision started in his mind, where he just wanted a place to hang with his peers, have fun, and build. “I just wanted a kick it spot,” Ward-Wallace implied. He went on to say, “I saw the change coming, I saw what was about to happen. People are telling me I was crazy. I stood out there with trash cans, dirty, and digging, people asking me what I am doing. I didn’t listen to the naysayers. I said you know what, this is my community. I am going to build it.”

Joe and his wife, Celia Ward-Wallace, had a vision and executed. At the grand opening, there were community leaders from all over Los Angeles, entrepreneurs, councilman, artists, and even the Captain of Police Lee Sands was in attendance. Sands said, “I think this is way overdue in this community. For me, as a law enforcement officer we will support this wholeheartedly. This is a place we will use for officers to interact with people in the community, which I think is even more important. This coffee shop will not only bridge community members together, but it will enhance the relationship between law enforcement and those individuals, which I think is needed.” Everyone was there, vibing with one another, networking, laughing, drinking coffee, and having a great time. This celebration ignited innovators in the area because they now have a place to express their creativity and meet other like-minded individuals. 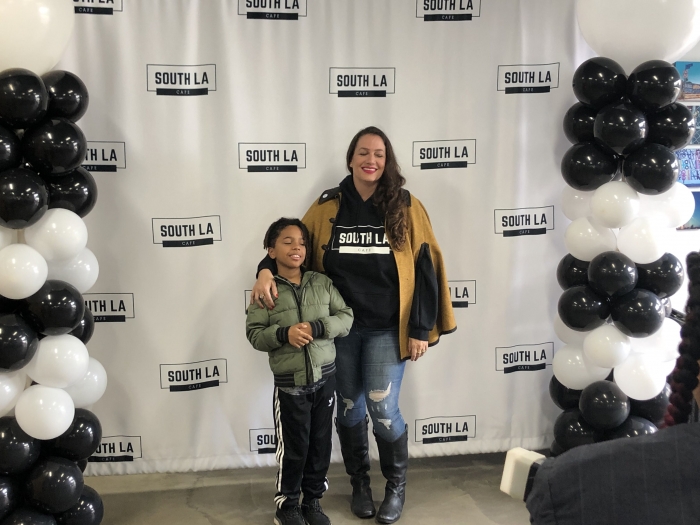 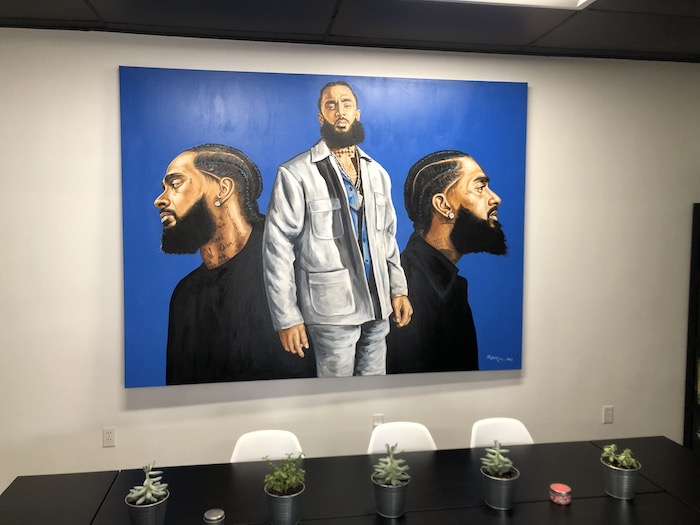 Celia Ward-Wallace encouraged the attendees to follow their dreams, and build businesses that create an impact, but only if you genuinely feel called to do it. In a journey of building an empire, there are going to be times when you inspire others, and there will be trials, tribulations, and obstacles that will make you want to give up. The only thing that will keep you pushing in times of hardship is if you have a purpose behind what you want to accomplish. Celia Ward-Wallace came up with the mic and said, “To speak to the mission, if you are interested in businesses that make an impact or driven by purpose, you really shouldn’t be doing it, if you aren’t deeply rooted in a why, and a mission. Keep that in mind, when you are deciding what you want to do. Don’t do it unless it’s something you feel internally called to do. Like you are the planet because you need to do this.” She kept it real and emphasized how serious it is

to have a story behind your mission. You have to have a purpose more significant than you when making a difference.

Councilman Marqueece Harris-Dawson came and supported the grand opening. Councilman is happy to be apart of this project, and he talked about King Estates is an untapped area in the community. Dawson said, “King Estates is one of the most powerful neighborhoods in the community. It’s a neighborhood with a lot of potentials that haven’t been realized here today. Joel and Celia invested like two years ago, and they figured out a way to make it work. Not just to make it a gathering place in the community. But for people to come from all around the world. It’s part of a bigger revitalization of Western Blvd. There a lot of things happening here in King Estates.” 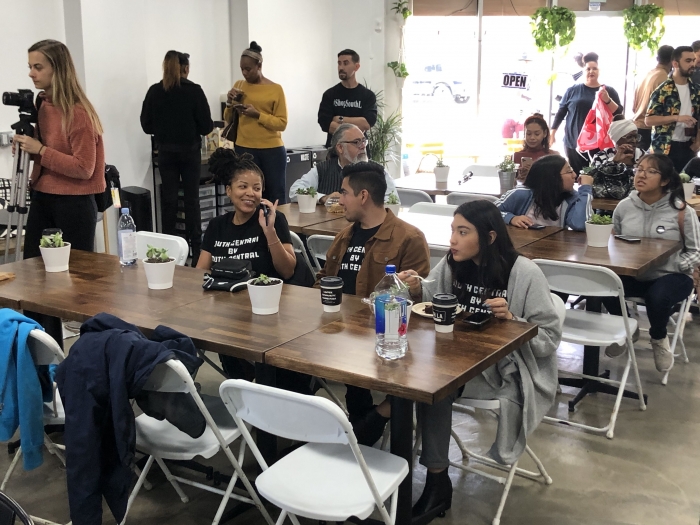 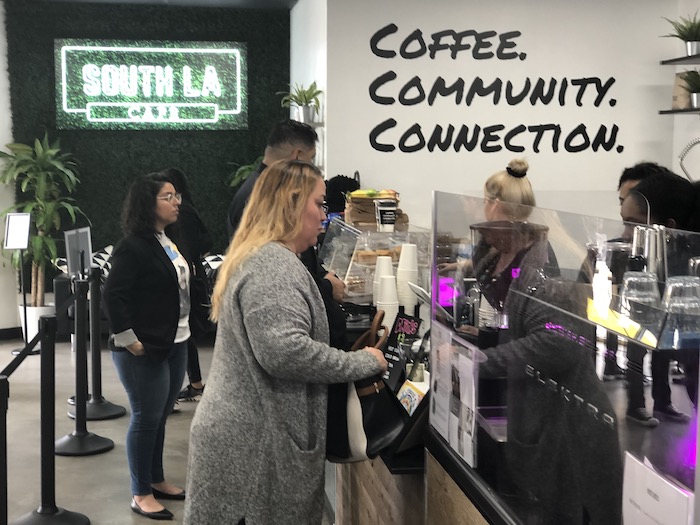 Dawson also touched on the fact that there are a lot of upcoming entrepreneurs coming up in the area. “It’s a movement. People in our community, our sons, our daughters, our grandchildren, our nieces and nephews, they are figuring out if we want a certain thing in our community we can’t wait for someone to come in and bring it. We have to build it ourselves. That’s what Joe and Celia have done here today at South LA cafe. It’s a whole movement. We have more cafe’s now black-owned that we’ve had in the last 25 years. We’re figuring out coffee shops, we’re figuring out retail, apparel establishments. Nipsey Hussle behind us lit that spark about six years ago.” Council went on to discuss how proud the late Nipsey Hussle would be to see black people building businesses. “This is exactly what Nipsey would have wanted to see. One of his moments famous quotes is the highest human act is to inspire. He said that a lot because he understood that there is a limit to what you can do as an individual and by yourself. But what we all can do together is much bigger. What we see today and all along Western Blvd is an example of what we can do when we’re pointing in the same direction.”