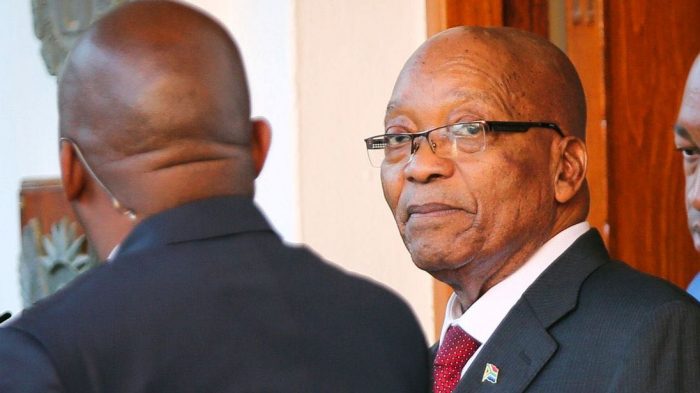 South Africa’s former leader Jacob Zuma is among those said to be impeding efforts by his successor, President Cyril Ramaphosa, to create a “new dawn” for citizens and foreign investors – free of corruption and cronyism which became associated with the Zuma regime.

Zuma was ousted as president of South Africa three months ago. It was a humiliating end to his nine year rule.

Now Zuma’s shadow is looming large over the Ramaphosa era as his allies launch a fightback within the ANC.

“There is bad blood there, and Zuma is feeling betrayed — it is an open secret,” political analyst Somadoda Fikeni from the UNISA university in Pretoria told the French news service AFP.

Zuma’s advisors still believe that he is “universally loved” and that the nation shares in his belief and anger that the charges against him are a political plot.

Even if that were true, Ramaphosa’s popularity, both inside and outside the ANC, is huge and without any doubt much, much bigger than that of Zuma.

In a public appearance at the High Court of Durban where he faced corruption charges dating back to before he came to power, Zuma’s followers chanted “Hands off Zuma” and “Tell us what he had done wrong.”

Later at a recent media briefing, Blade Nzimande, head of the South African Communist Party, threw the towel back at Zuma and urged the new president to “dismantle the networks of parasitic looting of public resources that flourished under the patronage of former president Jacob Zuma.”

Elsewhere in South Africa, white farmers are said to be receiving  self-defense training from an ex-Israeli soldier. It follows statements from President Ramaphosa that a radical land redistribution plan is in the works to address unequal land ownership in the country.

Yet crime does not just happen to White farmers, says Ronald Lamola, a presidential adviser and a senior ANC member. “It also happens to Black farm workers. It also happens to anyone, anywhere in this country.”