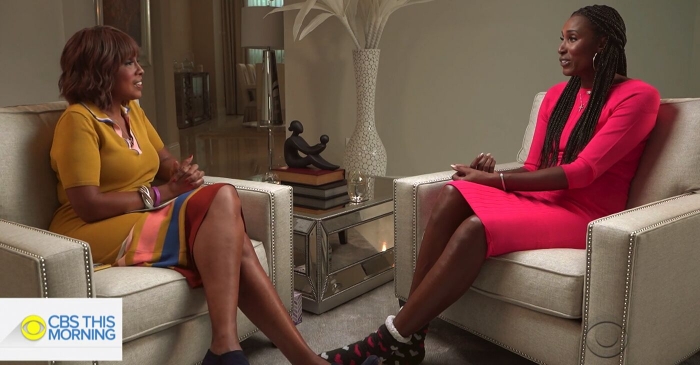 During an interview that covered a wide range of subjects, King was persistent and insistent as she pressed Leslie to respond to the resurfacing of 17-year-old rape allegations against Bryant. Bryant was not convicted of any wrongdoing in the matter. Prosecutors dismissed all charges against him after the alleged victim failed to appear in court. A civil suit brought by Bryant’s accuser was later settled for an undisclosed amount of money.

Many viewers felt that the questioning was insensitive and displayed a lack of simple human decency, given that Bryant’s family, along with the families of the other victims lost in the tragic accident, were still grieving.

“It’s been said that his (Bryant’s) legacy is complicated because of a sexual assault charge that was dismissed in 2003 / 2004,” said King to Leslie during the interview. “Is it complicated for you as a woman, as a WNBA player?”

“It’s not complicated for me at all,” Leslie told King. “I just never see – have ever seen him being the kind of person that would be – do something to violate a woman or be aggressive in that way. That’s just not the person that I know.”

Leslie stood firm. “I just don’t believe that,” she told King, adding that the media should be more respectful at this time.

While both King and CBS assert that it was a wide-ranging interview that covered many topics, she was persistent about the subject of sexual assault in general and its impact on Bryant’s legacy, specifically.

After the interview, rapper and actor Snoop Dogg, whose real name is Calvin Cordozar Broadus Jr., took to social media, posting what quickly escalated to an expletive-filled response to King. Some, including King, perceived Snoop’s post as a threat.

Snoop, who was a close friend of Bryant, referred to King as a “Funky Dog Head B***h and told King to pipe down “before we come get you.”

On Friday the former U.S. Ambassador to the United Nations, Susan Rice, entered into the melee with a warning directed specifically at Snoop, “This is despicable. Gayle King is one of the most principled, fair and tough journalists alive. Snoop, back the **** off. You come for @GayleKing, you come against an army. You will lose, and it won’t be pretty.”

For his part, Snoop maintains that it’s far too early for the media to press the issue of those allegations against Bryant. He argues that the Bryant family and the other families who lost loved ones in the crash are still in the early stages of mourning. And he is not alone.

Snoop later said that he wasn’t threatening King. “”When I said what I said, I spoke for the people who felt like Gayle was very disrespectful towards Kobe Bryant and his family.”

“Now with that being said, what do I look like, wanting some harm to come to a 70-year-old woman? I was raised way better than that,” said Snoop, who is 48-years-old about King, who is 65. “I don’t want no harm to come to her, and I didn’t threaten her. All I did was say, ‘Check it out. You out of pocket for what you doing and we watching you. Have a little bit more respect for Vanessa, her babies and Kobe Bryant’s legacy.'”

The debate over the appropriateness of Snoop’s take-down of Gayle King as well as Rice’s response, continues to dominate Twitter, Instagram, and Facebook, with several noted celebrities and social media influencers joining in.

Oprah Winfrey went on the Today Show to complain that King hadn’t slept in two days. Others started the hashtag, “#IStandWithGayle.”

Those who supported Snoop countered with the hashtags, “#ImwithSnoop” and “#IStandWithSnoop.”

“White liberals created the hashtag “#IStandWithGayle to try and save their puppet Gayle King, but trying to create a false Black man vs. Black woman narrative,” activist and film producer Tariq Nasheed wrote on Twitter. “But it was a Black woman (Lisa Leslie) and other Black women who led the charge against Gayle’s disrespect of Kobe.”

“Misogyny is evil. Period,” Glaude stated. “Sometimes, when people grieve, when they are in pain, they hurt others. They cause pain,” he said.

Many blasted King and Winfrey, who have both received criticism for going after Black men implicated in sexual assault while standing up for White men who have been accused of the same or similar crimes.

Photos of King and Winfrey posing with Harvey Weinstein, Charlie Rose, Bill Clinton, and other White men who’ve been accused of being sexual predators littered the Internet.

“Kobe had one accuser, and he was acquitted,” Isaac Hayes III wrote on Twitter. His message was accompanied by a video of King supporting Rose. In the video, King appears to lash out at those attacking Rose. “I don’t know what more we can do to Charlie Rose except a public flogging. He’s gone, he’s not coming back to CBS News,” King says in the video.

Hayes responded: “Charlie Rose had 27 accusers, and Gayle King stood by him. Kobe is gone and not coming back.”

“Gayle King, why would you do that to your people? You know what people are going through right now,” said 50 Cent, whose real name is Curtis Jackson III. ““I didn’t understand what the goal is at that point. She knows what Kobe means to the actual culture at the same time. Like they knew what Michael Jackson meant. I just don’t know what you’re trying to do when the men are dead.”

“The legal system couldn’t deal with it,” he added. “What are you supposed to do, publicly convict him? Is that the idea? Now is it justice or is it revenge? … It’s all public opinion now.”

“Why would you ask a question like that, trying to tarnish somebody’s image? You do that to your own Black people. You sad. Black people need to stop trying to hurt Black people for success.”