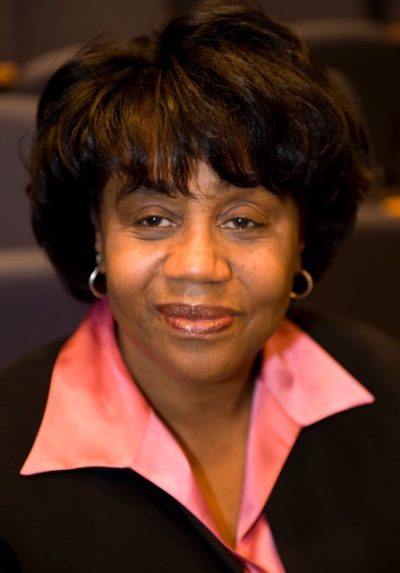 Sheila Mitchell is a full-time mother and criminal justice reformer working hard to reduce the number of incarcerated youth in the city of Los Angeles. As an L.A. County Chief Deputy Probation Officer, Mitchell has dedicated over 15 years to the juvenile justice system, fighting for the lives of young men and women.

Today, Mitchell is considered one of the highest ranking Black women in LA County government. A job that she stepped into with honor and humility.

“I take this responsibility very seriously,” she said.

“I’m someone who believes in a higher power. I know I just didn’t arrive at this position. It wasn’t happenstance, but rather it’s a directed calling. I love the work I do, and I know that the decisions I make affect children and families here in our community. I lead with my heart and head. I learned this wisely from both my parents and this learning is reinforced daily when I awake every morning. I lead as a Black gay woman, as a mother, as a grandmother, as someone who cares very deeply about outcomes for our children and our community.”

Mitchell’s career stands on the philosophy, “working herself out of a job.” She believes that individuals in the community should serve children, as opposed to the justice system.

“The population of kids who have been incarcerated is down almost 75 percent over the past 10 years. When I say ‘working myself out of a job,’ I mean perhaps there will always be a need for custodial facilities, but I want them to look like Campus Kilpatrick where we are implementing a highly therapeutic model and really working in a much different way.”

Throughout her time, Mitchell has spearheaded many reforms advocating for young men of color. Many believe young men of color are being punished more harshly than White youth. During the interview, Mitchell stated that 90 percent of incarcerated young people are Black and Latino. While youth of color are statistically punished more harshly than White youth who commit the same offenses. Recently, the Probation Department began implementing new tools to help assist in the removal of “implicit racial bias” in the department’s decision making process.

“I think Los Angeles County has made a major step in the right direction by creating a Youth Diversion and Development initiative. What that will do is keep kids out of the system by diverting them to community programs instead of arresting them.”

Mitchell goes on to say that L.A. County is headed in the right direction.

“Kids of color have not been afforded the same diversion options as White kids and that is something that is foremost on my mind in terms of what we need to change,” she said.

“It is something that we must do very systematically and very aggressively. If it is not incorporated in your practices, then you just go back to where you once were.”

Additionally L.A. County has begun investing a large amount of money to ensure its facilities are “trauma-informed.” According to Mitchell, 95 percent of youth that are a part of the juvenile justice system were considered victims or experienced trauma. Furthermore, 90 percent of those same youth have been exposed to the child welfare system.

“We want to make sure we address the core issues that brought [those youth] here,” she said.

“Our children are experiencing trauma to the degree that many of us would never understand or realize. When children are acting out, most of the time they are acting out for some reason, and we must understand why they are doing so. When we address trauma and racial disproportionality, we are getting to the heart of the issues that will make for a better justice system.”

Mitchell believes that her career and related work have been a direct calling from a “higher power.”

With that being said, the legacy she hopes to leave behind is one of great and thoughtful.

“I want to make sure that our children that have touched the Probation system feel we are doing right by them, that our nonprofits feel without a doubt that we have worked collaboratively with them and that my staff have the training and tools that they need for their job,” she said.

Sheila Mitchell formerly worked as the Assistant Chief Probation Officer with the Alameda County Probation Department. She also served as Unity Care’s Chief Operating Officer in 2016 prior to moving to Los Angeles in 2017. Mitchell has also been named one of the 100 Women of Influence in Silicon Valley by the San Jose Business Journal and is an American Leadership Forum Senior Fellow. Mitchell is the recipient of the 2013 Cesar Chavez Social Justice Leadership transformative work in the social justice. Sheila holds a Master of Arts in Conflict Resolution from Antioch University.