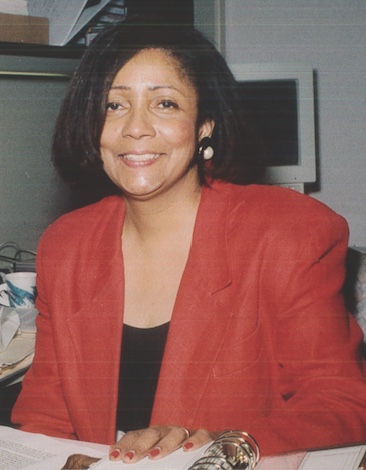 Sharon Woodson-Bryant was a kind, thoughtful, spiritual woman of faith and principle. She mentored young women of color and generations of black journalists.  She lived to make a difference.

Born Aug. 23, 1947 in Topeka, Kansas, to attorney James E. Woodson and teacher Ethel Ransom Woodson, one of Sharon’s earliest memories was when she was just five years old: She and her mother were turned away from the downtown Woolworth’s lunch counter, where only Whites were served.

Even after the 1954 Brown v. Board of Education of Topeka decision that declared racially segregated schools unequal, Sharon continued to encounter discrimination. Ironically, her father became the first Black member of the Topeka Board of Education in 1970.

Two years after that Supreme Court decision, Topeka integrated public schools. However, Sharon felt like an uninvited guest in the predominantly White Quinton Heights Grade School. Her White teacher always gave her a B no matter how well she did. When her mother asked why, that teacher said she did not know how to judge a Black student in relation to a White student.

The White students asked why she was so ‘tan’ and excluded her from social events because she was Black. The negative racial experiences continued during Crane Junior High School. When Sharon and a group of Black friends left a party, police dogs attacked them because they were Black.

No matter how negative the experiences, though, Sharon persevered. Because her parents were committed to the civil rights struggle, she went with them to register Black voters and to solicit NAACP memberships; her father headed the Topeka branch.  By the time she was 13, she had decided to become a journalist and change the world.

She earned Bachelor’s and Master’s degrees in journalism at the University of Kansas, where her papers, along with those of the Woodson family, are stored. Sharon was a proud member of Alpha Kappa Alpha Sorority. She worked as a reporter for newspapers in Grand Rapids and Ann Arbor, Michigan.

Broadening her career, she moved to Florida, recruited by Disney to work in marketing. That was not her passion. She really wanted to teach journalism at a historically Black university. She became the Kellogg Foundation visiting professor at Florida A&M University. A journalism instructor, she also traveled across the country to encourage black students to become journalists and recruit them to FAMU.

In Tallahassee, she also assisted in media relations for the local branch of the NAACP, which led to another opportunity: Sharon became the co-owner and publisher of the “Capital Outlook,” an African-American newspaper, the black voice of Tallahassee, which still exists. However, when the three-year funding for her position at FAMU ran out, she moved to Los Angeles in 1980.

Sharon lived in Los Angeles for more than four decades. Employed largely in public relations and government affairs, she worked for Bank of America, the Southern California Gas Company, Union Bank of California and, finally, for First 5 L.A., an organization committed to improving the health and well-being of children and families.

Active in the Black Journalists Association of Southern California, and a founder of the National Forum for Black Public Administration/Southern California chapter, she continued to help and mentor young African Americans.  She received many honors, but was proudest of her selection as an NAACP Legal Defense Fund Black Woman of Achievement.

She was always willing to share her gifts. For years, she quietly visited senior nursing homes, interviewed the residents and wrote their life stories. After retiring, she moved to Palm Harbor, Fla.

A beloved wife, she is survived by her husband, James A. Bryant; her mother, Ethel Woodson Parks; and her brother, James Woodson.

Even in death, Sharon continues to make a difference and help others. To help another generation of Black journalists, she requested, in lieu of flowers, donations be made in her name to the National Association of Black Journalists Scholarship or by mail to 1100 Knight Hall, Suite 301, College Park, MD 20742.