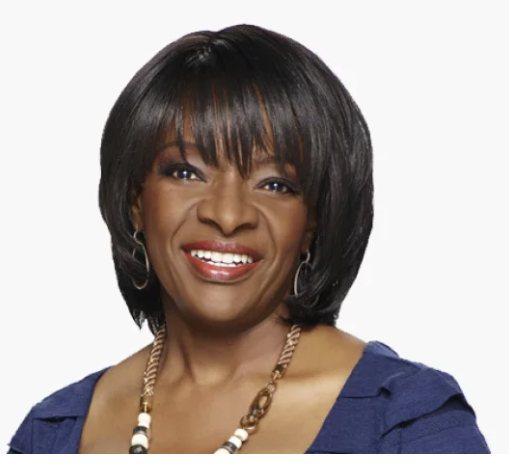 Los Angeles bid farewell to the iconic Beverly White, the dynamic news reporter who has graced Los Angeles airwaves for the last three decades and been in the industry for more than 40 years.

The versatile TV journalist attracted legions of fans while covering tragic events such as earthquakes and shootings as well as conducting memorable stories like the untimely deaths of music superstars Michael Jackson and Prince.  However, after 30 years of stellar work at NBC4, she is leaving L.A. to pursue new opportunities in Florida.

Acknowledging her success in the city of angels, White said, “L.A. has been good to me and I’ve truly enjoyed my time here.”  On Twitter she wrote, “This is for anyone who ever granted me an on-camera interview, gave me a news tip or blessed me w/a kind word. Thank you. I’m retiring today after 41 yrs in TV news. Y’all who watched & liked? I’m grateful 4 you too. Stay safe! And support journalism #1A.” 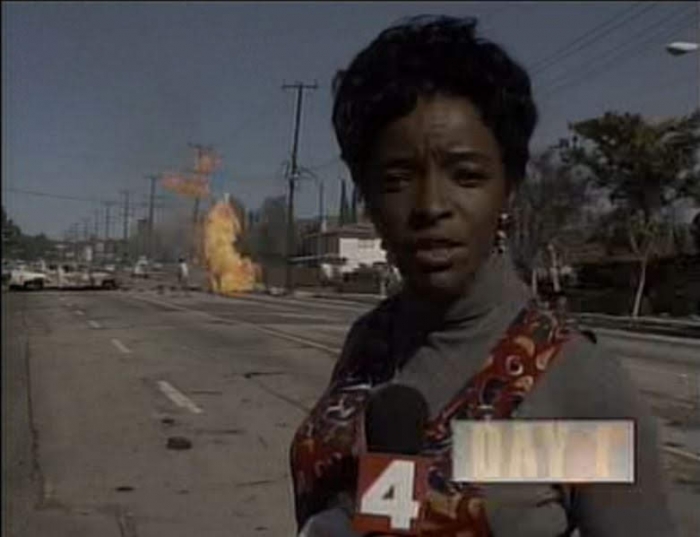 White’s fellow journalists expressed comparable sentiments about her storied career and friendship.  Her colleague Michael Brownlee quipped, “Without Bev White on site, it just don’t feel right,” in response to her departure.

“Beverly has a command in the field. She grabs you by the arm and says, ‘Let me explain this to you and pay attention and I got you,’” insisted NBC4 General Manager Todd Mokhtari.

“She’s like the queen mother of news,” said photojournalist David Gregory. “Compassion and fairness. I mean it means the world to both of us really to make sure we get everyone’s voices in the story.” 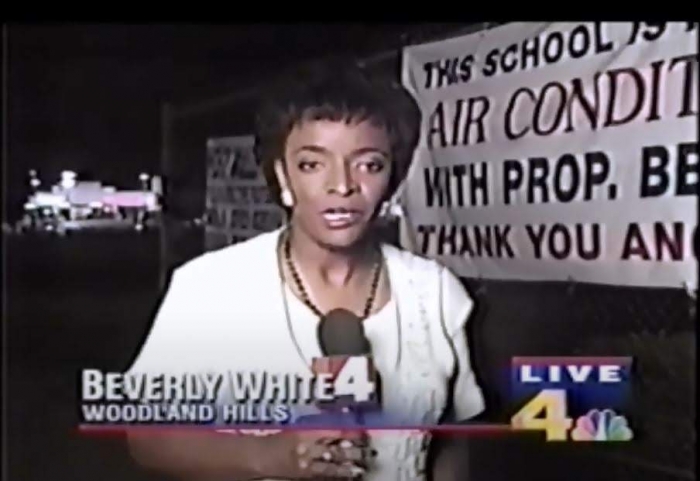 “Beverly is a kick-ass reporter,” declared anchor Colleen Williams.  Her statement is illustrated by White’s coverage of the 1994 Northridge earthquake, the jarring street protests following the murder of George Floyd, and the delayed government response to the COVID-19 pandemic.

Looking back on some of the stories she’ll always cherish, White said, “I covered Nelson Mandela when he was first released [from prison]. The station flew me to Miami. Also, I covered him when he came to L.A. [and appeared at] First AME Church. Just to be in that space was memorable. 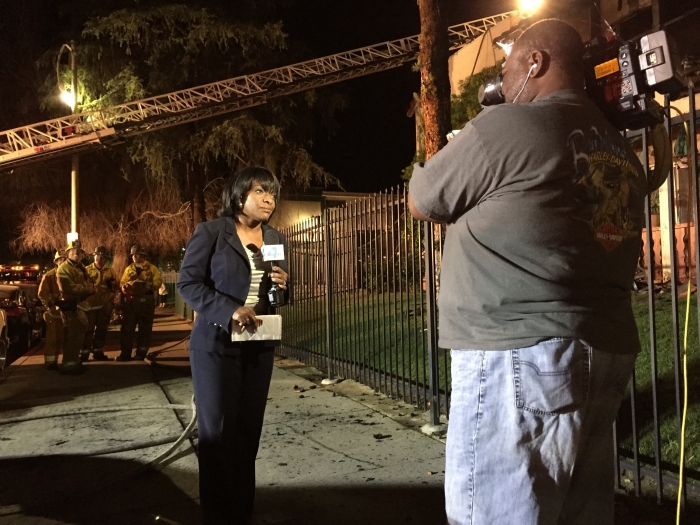 White reported on some of the city’s largest fires. (Courtesy photo)

“I also got to interview Desmond Tutu, which was awesome. And due to childcare issues, I had to take my daughter on my interview with Maya Angelou, who actually got down and played with her.  My daughter still remembers it.”

While some believe they witnessed White grow up on the L.A. TV news, she was a seasoned and award-winning reporter when she joined the KNBC4 in 1992.  A native of Texas, White worked at several stations before coming to the West Coast.

Armed with a broadcast journalism degree from the University of Texas at Austin, her first assignment was at KMOL in San Antonio. She moved on to stints at KCEN in Temple/Waco, KENS in San Antonio and WKRC in Cincinnati where she anchored the weekday morning news.  Later as a reporter at WTVJ in Miami, White was part of the news team earning a Peabody Award in 1992 for covering Hurricane Andrew. 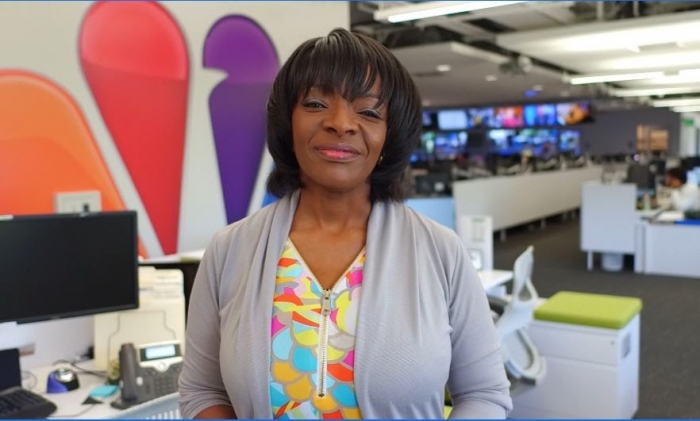 After 30 years at KNBC, White is retiring. (Courtesy photo)

Regarding her arrival, she remembered, “When I came to L.A., I had a proven track record and was an established reporter.”  She also joined the growing contingent of L.A.-based African American TV journalists.

“There were already many Blacks in the industry here. I worked with Furnell Chapman at KNBC and also, Marc Brown (of ABC7) and Pat Harvey (of KCBS/KCAL) were here.  Although we’re on different stations, we are all colleagues and support one another,” noted White.

In addition to supporting her fellow reporters, White advocates for up-and-coming African Americans in the industry through her work with the National Association of Black Journalists. A longtime member of NABJ, she served two terms as president of the organization’s Southern California Chapter. 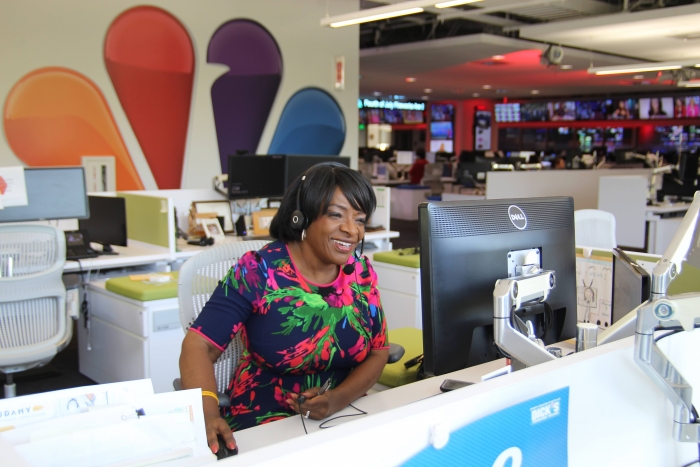 “I owe so much to NABJ,” said White. “I began attending the national conferences in the 1980s. At one conference, I had my reels and showed them to a woman who [went on to] hire me in L.A. Also, I met my husband at a NABJ convention and he came to L.A. with me!”

As for the future, White and her husband preparing to relocate again. “We are moving to Fort Lauderdale, Florida on the Gulf side,” she announced. “I’ll be close to my granddaughter and I won’t just do nothing. Perhaps I’ll teach since I taught as an adjunct professor at USC.”

She also intends to continue promoting NABJ and Black media in general. “I appreciate the Black press,” White said. “Mr. Bakewell – Sr. and Jr. – have always supported me and covered my career in the past. I think the Black press is important.” 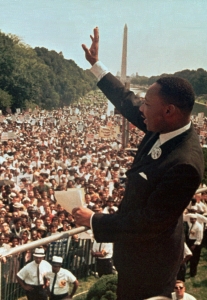