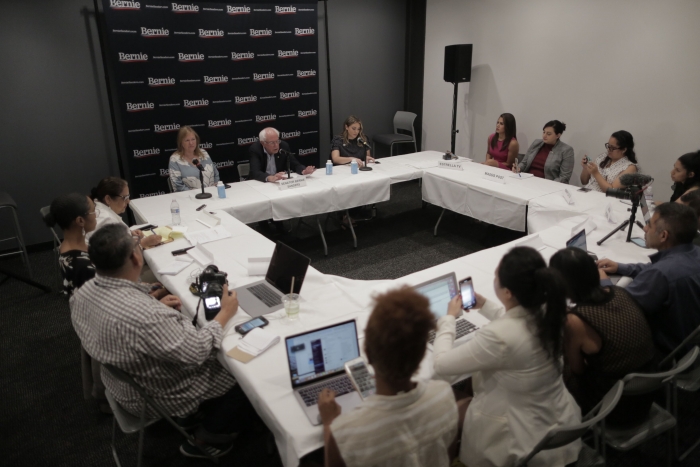 The Los Angeles Sentinel, along with other ethnic-based independent media platforms, met with Senator Bernie Sanders last Friday, to discuss issues affecting the communities they cover. From topics like the racial wealth gap and environmental racism, to gentrification, immigration and affordable healthcare — Sen. Sanders addressed it all.

“The role local ethnic media plays in informing minority communities is crucial. All communities deserve to hear our message of creating a government that works for all of us, not just the few, especially those who are disproportionately affected,” said Sen. Sanders at the opening of the meeting.

The roundtable was part of an ongoing effort by the Sanders 2020 campaign to invest in and listen to communities of color. Present at the meeting were representatives from some of L.A.’s African American, Armenian, Chinese, Latinx, Indian and Filipino publications.

“I am more than aware that L.A. is incredibly diverse, and I think that we are all aware that we are dealing with the President of the United States, who tragically, is a racist, a religious bigot and a xenophobe and who wants to divide us up based on where we came from, what religion we believe in, the color of our skin and sexual orientation.”

This is the second presidential campaign for the 77-year old self-proclaimed ‘Democratic Socialist’ after losing to Democratic candidate Hilary Clinton in the primaries during the 2016 election. His liberal views, heavy criticism of corporate America and his promise to eliminate all student-debt and college tuition quickly gained his popularity amongst the young, White left. Part of this contributed to why the senator lacked the Latinx and Black vote.

“Last time around, when I started the campaign, I think we started with three or four percent in the polls and nobody knew who the junior senator from the state of Vermont was,” said Sen. Sanders. “In fact, not too many people knew what Vermont was,” the Senator added jokingly.

This time around, Sanders is more popular with women people of color than with White people and with men, according to an analysis of a poll published earlier this year by Politico. It also shows that Sanders led all other Democratic candidates, except for Joe Biden, when it came to the Latinx vote. 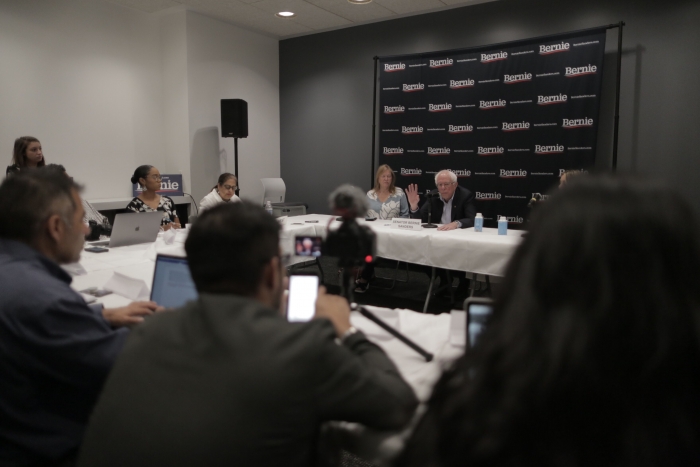 “We’re starting in a very different position today,” says Sen. Sanders. “Many of the ideas that we talked about last time, now don’t seem that radical.”

Those issues like legalization of marijuana, raising the minimum wage to 15 dollars per hour, criminal justice reform, and student loan forgiveness set Sen. Sanders apart from other Democratic candidates. Four years later, and these items are at the forefront of most Democratic candidates’ platforms. Senator Kamala Harris, who trails Sen. Sanders with 11 points in the polls, just recently proposed her student loan forgiveness program which has since gained much criticism.

“Well u know what, virtually all of those same ideas are now being talked about by every candidate in the primary democratic process,” said Sen. Sanders.

So how does he set himself apart?

“Well, I have been fighting these fights for a very long time and I think that what my record shows is that I have the courage to take on very, very powerful special interests who have undue influence over the economic and politic life of this country.”

Reporters from each of the platforms present at the roundtable asked Sen. Sanders questions specific to those very powerful interests Sen. Sanders referred to. When the L.A. Sentinel asked Sen. Sanders how he would address the racial wealth gap in the country, he agreed that this was an important question. The New York Times recently reported that for every 100 dollars of a White family’s income, a Black family makes only $5.04. 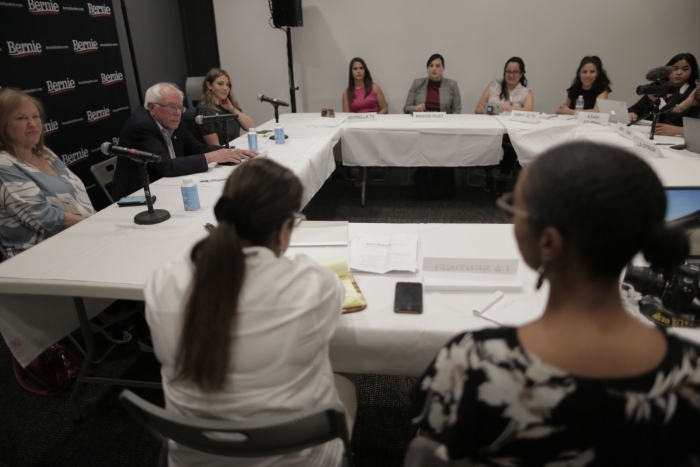 Sen. Sanders says that beyond the immense wealth disparity in the country, the racial disparities are massive in every index.

“Whether it is wealth, where the gap is, I think, 10-to-1 between a White family and a Black family; Whether it is educational opportunity — Black kids are going to leave school much more deeply in debt than White kids; Whether it is healthcare, where you have an infant mortality rate in the Black community two and a half times that of the White community.”

Amongst all of the items on his platform, Sen. Sanders most fervent promise is to be nothing like the president in office today.

“Certainly, as president of the United States, my job would be to do everything that I can to move the country in exactly the different direction than what Trump is trying to do,” said Sen. Sanders.

In the coming months, the Bernie Sanders 2020 campaign will continue to reach out and engage with immigrants and communities of color across the country. This week, the senator will have an even larger audience to share his platform as he takes the stage in the second round of preliminary Democratic debates.

“I think what divides many of us from Trump’s ideology is that we believe we have a hell of a lot more in common as human beings,” said Sen. Sanders. “It is a priority for our campaign to continue this outreach and ensure our vision of coming together to create change in America is accessible to all.”