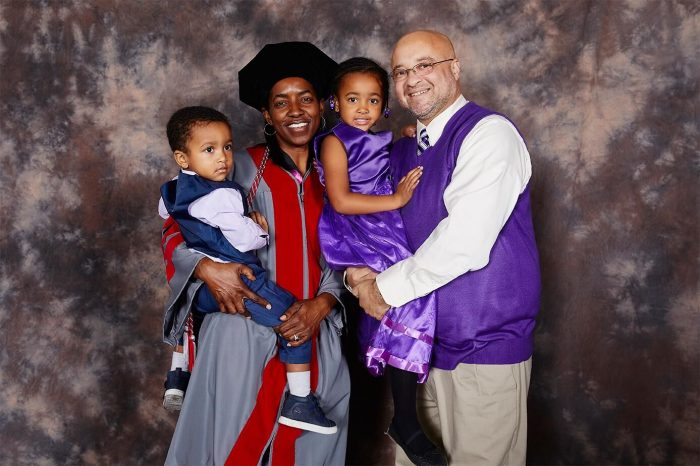 Raised in San Bernardino, California by a single mom, with four other children, there wasn’t anything extraordinary about Schetema Nealy’s childhood, at least on the surface. Because, one would have to be at least a bit extraordinary to accomplish what she did recently, becoming the first African American female to receive a Ph.D. in chemistry from the University of Nevada, Las Vegas. The Sentinel recently caught up with Nealy to talk about her accomplishment and how it came to be.

Nealy showed an early interest in math and science as a K-12 student, some extraordinary in itself, since some of the latest educational statistics  from the 2015-16 Civil Rights Data Collection survey of U.S. public schools show:

The survey results also showed reasons for the disparity which included:

But Nealy wasn’t thinking about statistics when a high school teacher encouraged her mathematical and scientific abilities.

“I love to solve puzzles and figure things out. That’s basically what chemistry is. It also involves a lot of math, which I also love.”

“I transferred to UCLA from there,” she recalled.

“I got a bachelor of science in 2004 and I worked and went back to school.”

Nealy earned an M.S. from Cal State L.A. in analytical chemistry in 2008, moving on to Cal Tech where she earned a second master’s. By this time she was married and her husband’s job sent the couple to Las Vegas.  She attended UNLV where she earned a Ph.D. in chemistry.

“The day you earn the degree is uneventful,” Nealy said.

“It didn’t hit me until graduation and I was on stage. They were talking about my accomplishments and the crowd went wild. That energy just went through me. That’s when I really knew that what I was doing was making a difference.”

Nealy said the aftermath has been tremendous. A mother herself now, the 39 year old’s children watch her graduation video sometimes in awe.

“It feels excellent to inspire others, especially my children,” Nealy said.

“With this degree, I feel like I can do more. And I feel like earning this shows my kids that this is an option for them.”

Another amazing tidbit: Nealy’s educational accomplishments required no student loans. She earned scholarships and fellowships (at the graduate level). That may be one of the best endings/ beginnings in her journey.