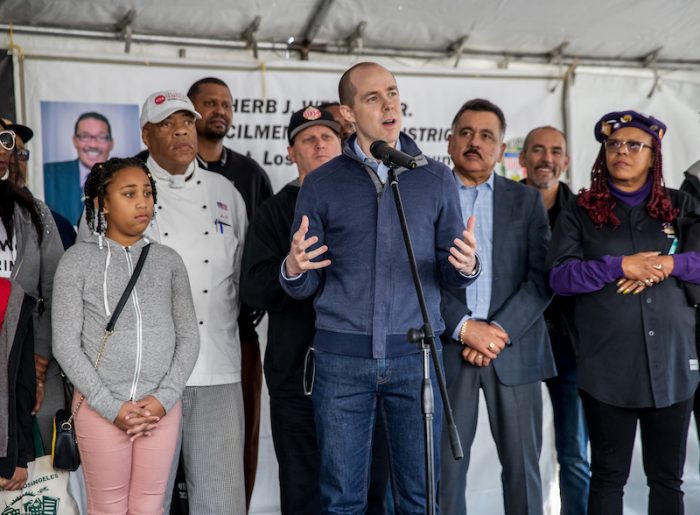 California Democrats are facing a major decision: not which 2020 presidential candidate to support, but whom to elect as the next the chair of the California Democratic Party in a few months. Following the resignation of former chair, Eric Bauman amidst sexual harassment allegations, progressive activists and officials will select their next leader at the state party’s convention in San Francisco the weekend of May 31-June 2. Several contenders have thrown their hats in the ring, promising to bring reform to the party, to continue expanding Democrats’ lead in the House of Representatives, and to oust President Donald Trump in the 2020 election.

Los Angeles’ hometown candidate is Rusty Hicks, the president of the Los Angeles County Federation of Labor, AFL-CIO, who is among the most formidable front runners. As a labor union activist, Hicks has led grassroots efforts in order to win races in L.A. and beyond for decades, and has also served as a Democratic State Central Committee delegate for more than 12 years.   Longtime community activist and leader Jimmie Woods Gray is one of Rusty Hicks biggest advocates. “I support Rusty Hicks for Chairperson of the CDP, I’ve watched him do the work that is needed at the state level for years.  We need a strong worker not a talker, and Rusty is that person, ready to lead the California Democratic Party to victory in 2020.”

After announcing his candidacy on January 18, Hicks immediately began reaching out to delegates across the state and launched a “#58in58 Road Trip,” vowing to visit each of California’s 58 counties to meet with Democratic delegates and activists in each of the state’s 58 counties. Surprisingly, connecting directly with party leaders across the state is reportedly an unusual method for the CDP Chair campaigning; as one rural County Committee Chair put it, Hicks’s meet-and-greet stop was the first time in recent memory that a candidate for CDP chair had visited with his committee.

As president of the L.A. County Federation of Labor, Hicks’s track record is lengthy: partnering with the Anti-Recidivism Coalition to create job programs for formerly incarcerated women and men, increasing diversity in the labor federation’s leadership (there are now twice as many women, and 60% of leaders are people of color as when he started), leading the campaign for $15 minimum wage in L.A. and taking it statewide, fighting to guarantee healthcare coverage for immigrant children, and more. His activism may be rooted in his personal experience, having been raised by a single-mother, and growing up with his father incarcerated. “Rusty Hicks is the chairman of the California Democratic Party needed to lead us NOW!  California is the beacon of hope, inclusion and Obama prosperity needed to keep this state and country strong.  Rusty is the Democratic Party leader who will keep us together so we will again be the country that values people over profits.”  Stated California Assemblymember Reggie Jones-Sawyer. 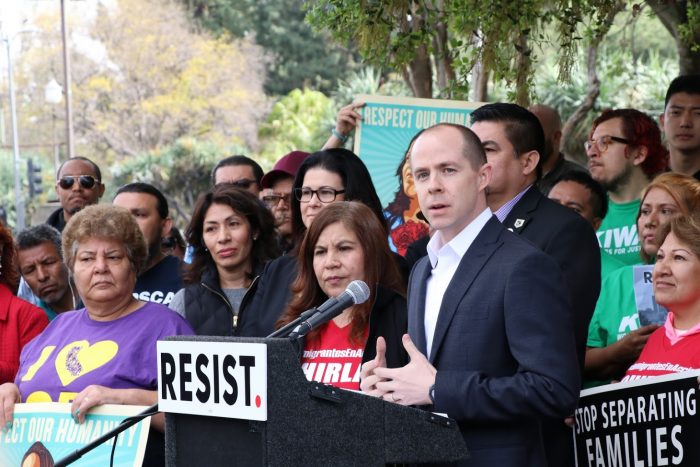 Hicks took a leave of absence in 2008 to serve as the Obama campaign’s California Political Director. (PHOTOGRAPH BY MONICA ALMEIDA)

In 2008 Hicks took a leave of absence from his job to serve as the Obama campaign’s California Political Director, and worked for the late Assemblymember Mike Gordon and then-Assemblymember Ted Lieu earlier in his career. Among his many Democratic campaign efforts, he most recently proved instrumental in unseating Republican and U.S. Representative Steve Knight in California’s 25th district, leading a coalition to educate the area’s constituents on their representative’s latest votes and positions on each and every issue. The education campaign paved the way for the successful flipping of the seat in last year’s midterm elections, when Democrat Rep. Katie Hill took the seat as the area’s next U.S. Representative–the first time a Democrat had won the seat since the early 1990s.

Rusty has promised that if elected, he will strengthen the California Democratic Party’s effectiveness by building on his decades of organizing experience and empowering local committees and clubs, listening to the needs of the grassroots and ensuring not only a welcoming environment but a safe one, and increasing transparency within the organization.

“I’ve worked side-by-side with Rusty for years,” said Jamarah Hayner, co-chair of GLAAACC and spokesperson for RH campaign. “Now more than ever, we as Democrats need a leader with his track record of winning major, tangible economic wins for people of color and our families.”

Rusty is a lieutenant in the US Navy Reserve and a graduate of Austin College and Loyola Law School. Rusty lives in Pasadena with his wife, Sandra Sanchez, and their dog Charlie.