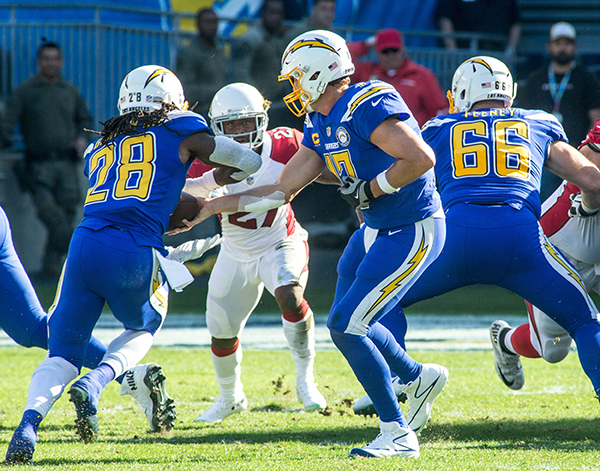 Chargers Melvin Gordon finished with two touchdowns for 55 rushing yards against the Cardinals before leaving the game with a knee injury in the third quarter (Robert Torrence/L.A. Sentinel)

Fresh off seeing their six-game winning streak come to an end after a 23-22 setback loss against the Denver Broncos last Sunday, Philip Rivers used a record-breaking day to get the Los Angeles Chargers back on track.

Rivers set a single-game NFL record by completing his first 25 passes, as the Chargers (8-3) decimated the Arizona Cardinals (2-9) 45-10 on Sunday in front of a sellout crowd of 25,343 at StubHub Center.

“He was hot,” Chargers coach Anthony Lynn said. “Guys were getting open and making plays for him. There were some great catches out there today.”

The future Hall of Fame quarterback finished 28-of-29 for 259 yards, for three touchdowns and led Los Angeles to score 45 unanswered points through three quarters of play.

“It was an efficient day, to say the least,” said Rivers, as it also marked his 1th straight game with multiple touchdowns. “There were so many guys today who were making the catches, the guys protecting. A lot goes into completing the ball, more than just me throwing it.”

“There are far-off dreams where you wonder if you are going to have a game where you are never going to miss one and then you say, `Probably not.’ The fact that we were staying there in the fourth quarter says something,” Rivers added. 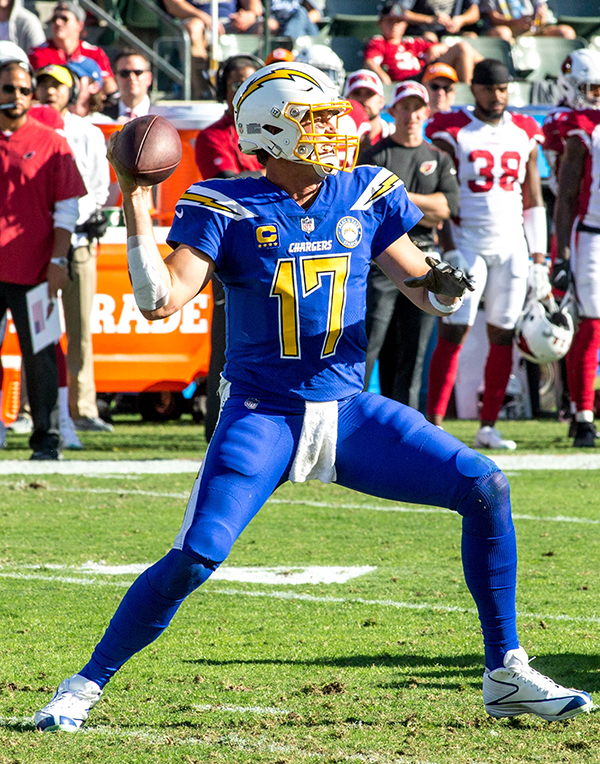 Chargers quarterback Philip Rivers finished 28-of-29 for 259 yards, for three touchdowns and set a single-game NFL record by completing his first 25 passes against the Cardinals (Robert Torrence/L.A. Sentinel)

Chargers Mike Williams was responsible for two of Rivers touchdowns, as the second year receiver caught two in the corner of the end zone.

“He makes everything easier for us as receivers,” Williams said. “Philip put the ball up for me to go make a play and I’m just going up and making it.”

Los Angeles running back Melvin Gordon ran for two touchdowns in the second quarter and ultimately finished with 61 yards on 10 carries.

However, in the third, Gordon suffered a knee injury after the Chargers ran a reverse trick-play that went terribly wrong.

“Hopefully what happened is not serious. His durability has been pretty good this season,” said Lynn.

Gordon’s backup, Austin Ekeler totaled 103 yards from scrimmage on 35 rushing and 68 receiving and a touchdown.

“We’re all gonna have to pick up the load a little bit,” added Rivers on if Gordon is sidelined due to his injury. “Thank goodness you have a guy like Ekeler who that’s right there behind him that we know we have a great deal of confidence in.”

Cardinals hometown Manhattan beach product and former UCLA quarterback Josh Rosen was impressive in the first quarter after 79 yards passing in the first quarter. He completed all four of his passes, with his last being to Larry Fitzgerald for a touchdown.

The Cardinals finished with 108 yards of offense in the first quarter and earned a 10-0 advantage, after that, Arizona was held to only 41 the rest of the game.

“I think you gotta give credit to the Chargers,” said Rosen who finished 12-of-19 for 105 yards, a touchdown and interception. “I have to make better reads and be more decisive on certain things.”

With the score already being 28-10 in the third quarter, Rivers connected with his All-Pro wide receiver Keenan Allen on a four-yard strike for Rivers third touchdown of the game.

Los Angeles dominated Arizona on all facets of the game. The Chargers led in time of possession 35 minutes to 24 and ultimately totaled 414 yards, while the Cardinals finished with 149.

“It will be a heck of a challenge but these are the games you just love to play in,” Rivers said. “A December game in Pittsburgh on a Sunday night, it’s kinda all you can ask for.”