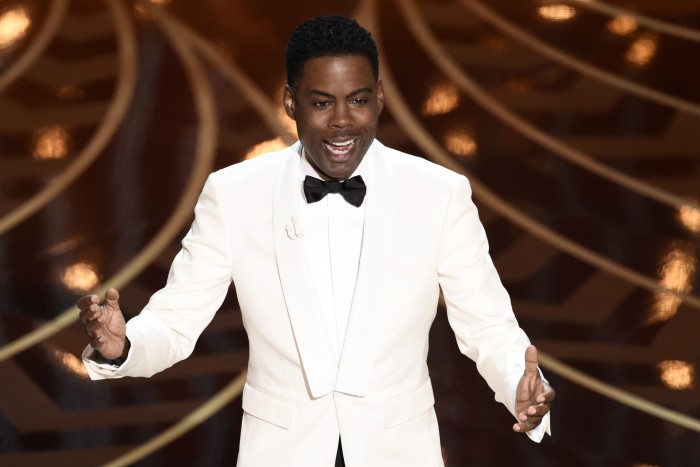 Host Chris Rock speaks at the Oscars on Sunday, Feb. 28, 2016, at the Dolby Theatre in Los Angeles. (Photo by Chris Pizzello/Invision/AP)

Hollywood and movie fans alike were holding their breath as the comedian took the stage as host of Sunday’s Oscarcast with more at stake than a roster of winners and losers.

He didn’t wait a moment to get down to business, welcoming everyone to the 88th Academy Awards — “otherwise known as the White People’s Choice Awards.”

From there, he barely paused to catch his breath, joking (or was he?) that if the Academy nominated its hosts, “I wouldn’t even get this job.”

For weeks, Hollywood’s annual “biggest night” had been shaping up as Hollywood’s biggest white night after, for the second straight year, the Academy of Motion Picture Arts and Sciences shut out any nonwhite acting nominees.

For once, the Oscars promised to eclipse the movies it was there to celebrate, with the duties of its host clearly loftier than making wisecracks and introductions.

For once, this ABC broadcast needed to strike a balance between its usual bounty of self-aggrandizement and a rare show of remorse for Hollywood’s glaring lack of inclusion.

Drafted to lead this juggling act was Rock, a no-nonsense humorist who, as a black man, was put in a dicey position: That of mouthpiece for everyone in the film industry who isn’t white.

If the pressure weighed upon him, he didn’t let on.

His monologue was a slam-bam assault on complacent racism — while, in the best Rock style, putting things in droll perspective.

Yes, Hollywood is racist, he declared, but not the usual brand. “It’s sorority racist: ‘We like you, Rhonda. But you’re not a Kappa.'”

No, things aren’t fair in Hollywood. It wasn’t fair that Will Smith didn’t get a best actor nomination for “Concussion,” he said, quickly adding, “It’s also not fair that Will got paid $20 million for ‘Wild, Wild West.”

On the other hand, he mused on why, only this year, had the diversity issue erupted, inasmuch as for most of Oscar’s past 87 years, no blacks had been nominated.

Why weren’t blacks protesting in say, the early 1960s, posed Rock, who then supplied an answer: “Because we had real things to protest at the time. We were too busy being raped and lynched to worry about who won best cinematographer.”

In Rock’s most painfully hilarious joke, he promised things were already changing, even in this very broadcast: “In the ‘In Memoriam’ package, it’s just going to be black people shot by cops on their way to the movies.”

“We want opportunity,” Rock said, in a rare direct appeal. “We want black actors to get the same opportunities. That’s it.”

A pre-taped feature found Rock visiting a movie house in Compton, California, where he had fun with the fact that these black cineastes had not seen, nor even heard of, this year’s Oscar-nominated films.

“Did you see ‘Bridge of Spies’?” Rock asked one moviegoer.

“You’re messing with me, right?”

“These are real movies!”

But apart from Rock and the message he drove home, the Oscarcast was a humdrum affair.

A rare comic respite was a “Black History Moment” paying tribute to a multifaceted artist who, in the words of Angela Bassett, has “shattered barriers” in filmmaking: Jack (very white) Black.

A full-throated performance by Lady Gaga of “‘Til It Happens to You,” an Oscar-nominated song addressing sexual assault (and introduced by Vice President Joe Biden) rocked the rafters.

But mostly when Rock was absent, languor prevailed.

Of no help was a restructuring of the categories that was meant to track the actual process of filmmaking, starting with best screenplay. But this only served to backload, even more than usual, the major awards. With all respect to costume design, editing and visual effects, they are not why the audience watches the Oscars. After the monologue, viewers might well have skipped the next two hours and missed little.

This was Rock’s second turn at hosting the Oscarcast. When he was named in 2005, it was seen as a bold step by the Academy to shake off the broadcast’s accumulated cobwebs. Suspense greeted him that night to see what this irrepressible comedian might say or do. He nailed it, presiding with saucy finesse. Strangely, he wasn’t invited back for 11 years.

This go-around, Rock wasn’t brought aboard to inject controversy. Instead, controversy was foisted upon him by the industry and Academy voters. He dealt with it gleefully.

How soon will he invited back for a third time? How soon will Hollywood take action on his shrewd observations? The Oscarcast left viewers with those movie cliffhangers. 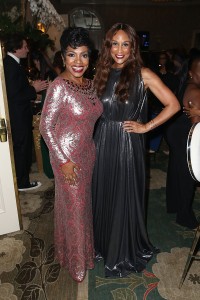