The conception and development of  our philosophy, Kawaida, the work and struggle of our organization Us, and the people-focus, cultural groundedness and social consciousness of the leadership and people we seek to cultivate, teach and exemplify, all began with what our ancestors called in the Husia a “courageous questioning.” Indeed, this courageous questioning runs like a red line through our history from Khunanpu, a peasant, who questioned Rensi, a chief judicial official in ancient Egypt, about the concept and practice of justice especially concerning the vulnerable to Fannie Lou Hamer who declared in the midst of the Black Freedom Movement, that she questioned America in its hypocritical claim to be “the land of the free and the home of the brave.”

And this tradition and model of courageous questioning is expressed also in Messenger Muhammad’s commentaries concerning embracing a God and religion of freedom rather than a God and religion of oppression and in Min. Malcolm’s criticism of a racialized democracy that makes us victims rather than beneficiaries. Likewise, it is found in Carter G. Woodson and Mary McLeod Bethune’s critical stress on education for liberation and upliftment rather than vulgar careerism and mindless service to the established order.

The concept of courageous questioning (nedjnedj ken) is found in the Book of Rekhmira, a prime minister of ancient Egypt. He lists it among a series of virtues that a Maatian civil servant or activist intellectual possesses. These virtues are being: versed in the texts, clear of vision, insightful, well-mentored, deliberate, patient, courageous in questioning; and wise in listening to the ancestors. He does not explain what he means by courageous in questioning, but from the context of his whole text and related ethical texts like Khunanpu and Khakheperasoneb, and moral self- presentations in ancient Egyptian autobiographies, an idea of its expansive meanings becomes clear.

Indeed, courageous questioning is a rightful and righteous calling into question, seeking answers and offering a severe criticism of the evil, the wrong and the unjust. In addition, it is constantly seeking and speaking truth to the people and to power, demanding justice and bringing Maat (truth, justice, propriety, harmony, balance, reciprocity and righteous order) into being.

And it especially means doing this without fear of consequences of death, political imprisonment, exile, underground existence, and constant attacks of all kinds—or without deference to debilitating and oppressive conventions, customs, hierarchies, or perverse and pathetic calls for peace without justice. It is to speak audaciously, as Khunanpu spoke to Rensi saying “this humble person who returns to make a complaint to you is not afraid of you, the one to whom he makes his rightful claim.” Indeed, he tells him to “speak truth and do justice for it (Maat) is mighty, it is great, and it endures.” As it was in ancient Egypt, so it was with our other forefathers and foremothers mentioned here and others, a constant and courageous questioning and quest to end evil and injustice and bring justice and good into being. And Kawaida and Us embraced this tradition from them, even before we recovered and reconstructed the ancient Egyptian Maatian ethical tradition contained in the Husia.

Kawaida, Us and our leadership principles and practice began with a critical and courageous questioning in the 1960’s in a time in which Black was just beginning to come back into its own, and we dared to hurry the dawn of its coming. Africa was just rising in liberation and “Negro” things and thoughts lingered on like a morning fog that refuses to disappear quickly at sunrise. And thus, such questioning did not come without consequences or costs. Ours was a deliberate and depthful questioning concerning ourselves and then society and the people who ruled it. On every front, we raised questions of our identity, purpose and direction as a people. It was a process and practice of both opposition and affirmation, a defiant opposition to and rejection of the irrational reasoning and cave contentions of our oppressors and an audacious affirmation of the inherent worthiness and enduring weight of our people in the construction, transformation and advancement of human history.

The questioning was a total questioning, a questioning about how we live, the conditions of our lives, the possibilities of freedom and flourishing, and the unavoidable requirements for achieving them. We questioned the rationality, rightness and sanity of allowing our oppressor to be our teacher or tutor, or to tell us without challenge the tall tales of bringing us civilization and God and saving us from ourselves. We questioned and rejected his claim of being in any way superior, God-sent or possessing some racial or religious right to conquer, kill, dispossess, enslave and oppress us and other peoples of the world. We questioned and rejected his racial and religious claims to be singularly chosen, elect and exalted above all the other peoples of the world. And we refused to let the oppressors interpret and use God as an ally of enslavement, an enabler of holocaust, and a racialized divinity doing the barbaric bidding of the oppressor.

There was for us something wrong, irrational, unseeming, and in some cases, less than sane, about accepting doctrines of one’s own inferiority, of being saved from oneself by an oppressor, and being taught the way to live by manufacturers and merchants of death. There is in Us, then, then the early and ongoing questioning and criticism of the varied constraints on human freedom and human flourishing, i.e., racism, White supremacy, sexism, classism and other oppressive “isms” of thought and practice. In addition, there is a later calling into question the wanton injury to the earth, the plunder, pollution and depletion, and a parallel call to heal, repair and remake the world as central to the process and practice of healing and repairing ourselves. And we call this in the ancient Egyptian Maatian tradition, serudj ta—to repair, restore, renew and transform the world and ourselves making each more beautiful and beneficial than we inherited and received it.

This clearing of the tundra and forests of falsehood and mystification sowed and care- fully tended by the established order, opened the way to our reaffirmation of Africa as our moral ideal. It was a seeing of ourselves as Muhammad and Malcolm and our fathers, mothers, elders and others taught us, as possessors of divinity and dignity, inferior to none, anterior to all and a vital part of the rising tide of human history represented in the liberation struggles which were then reshaping and reordering the world. Thus, we stressed reaffirmation of the sacredness of our people and all human beings and our need and responsibility to honor our identity as an ancient and ongoing source and sign of creative work and righteous struggle in and for the world. There is today, in the midst of so much genuflection in leadership and injustice in life, an ever- increasing need of more courageous questioning in thought and struggle. And we must, each and every one of us, ask ourselves, “if not this, then what? And if we don’t do it, who will?” For Us on this our 50th Anniversary and always, the answers to these questions are as clear as a cloudless day in the summers and seasons of our revolts and righteous resistance for good in the world. 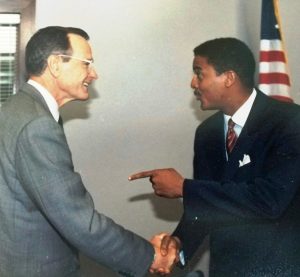