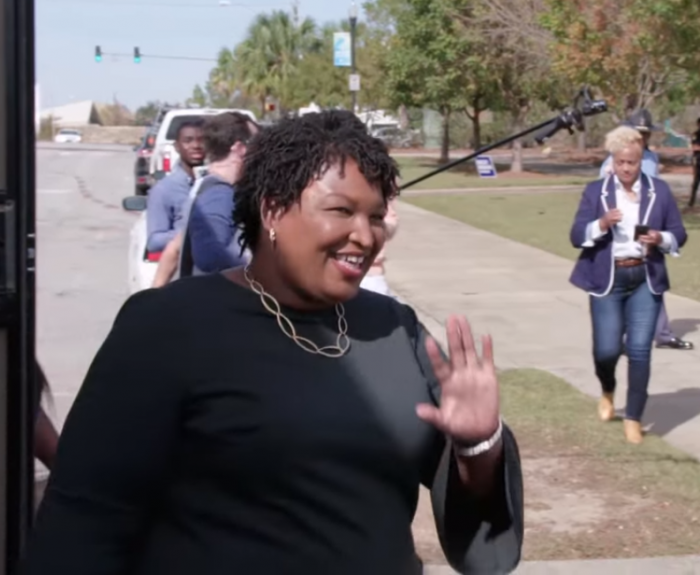 Georgia’s first black female major party gubernatorial candidate Stacy Abrams has been a long time advocate for voters’ rights. A recent report, released by the Coalition for Good Governance, shed light on some of the state’s voting system failures that may have affected her election outcome. (file photo)

The Coalition for Good Governance released a report this month highlighting a significant number of drop off votes for lieutenant governor in the state of Georgia, the highest number from largely black neighborhoods, they said. According to the report, over 100,000 voters in Georgia’s 2018 election voted for everything else but mysteriously skipped lieutenant governor. Some reporters, closer to the state’s politics are suggesting there may have been some funny business, citing suspect activity in the actual governor’s race between Democrat Stacy Abrams and incumbent Brian Kemp.

“As Georgia’s longtime secretary of state, Kemp presided over the state’s elections, voting machines and vote tallying. And as a vote suppressor, Kemp’s record of disenfranchising voters was unmatched,” writes Michael Harriot in an article recently published in The Root.

“Kemp wasn’t afraid to publicly warn his colleagues about the dangers of black voters. He disproportionately purged black voters from rolls. He threw out black absentee ballots. He used unauditable voting machines and left voter data unsecured. He essentially got to referee his own match.

In fact, the CGG noted in its report, that voting machines were the likely culprits of the missing votes, though they stopped short of contributing that fact to untoward party tactics.

“However, the undervotes on voting machines are concentrated in precincts where African

American voters make up the majority of the precincts’ registered voters. The rates of touchscreen machine reported undervotes in such precincts in the Lt. Governor contest are far greater than the

undervote rates in non–African American neighborhoods regardless of whether those  neighborhoods lean Democratic or Republican. The undervote problem did not happen at the same exaggerated levels in many primarily White neighborhoods that overwhelmingly voted for Stacey Abrams and other Democrats, rebutting the argument that the difference can be explained by party-driven voter behavior…”

But the report still raises questions about Georgia’s election integrity. That was something highly questioned in 2018, since Abrams had been on track to become one of the country’s first black female governors. She narrowly lost the election to Kemp by two points.

Kemp cancelled a gubernatorial debate to take place between the two, just a week before election day, in order to attend a rally for President Donald Trump. He blamed the cancellation on Abrams, saying she refused to reschedule. She responded, “We refuse to callously take Georgians for granted and cancel on them. Just because Brian Kemp breaks his promises doesn’t mean anyone else should…”

“Experts have long warned of the dangers of electronic voting that cannot be relied on for accuracy or audited or recounted when problems like ‘missing votes’ arise,” the report further notes,

“Georgia’s system is exceptionally vulnerable to attack, manipulation and human error in programming. First, the design of Georgia’s Diebold touchscreen voting system is so fundamentally flawed that the National Academies of Sciences recommended immediately abandoning all such systems before the 2018 mid-terms, which echoed the recommendations of most federal agencies and multiple Congressional committees. Further, Georgia’s unacceptable system’s problems are exacerbated by the fact that the system was compromised by its exposure to extreme cybersecurity risks in 2016 and 2017, and the impacts were never mitigated, meaning that residual malware may reside in the system, including 27,000 voting machines and thousands of additional vulnerable components.

“Georgia state and county officials including every county’s bi-partisan election board conducted this election on a system that they, and everyone else, knew was compromised.”

Members of CGG said the purpose of their analysis is to help state lawmakers as well as Congress to better understand system failures.

“We at Coalition for Good Governance believe it is imperative that Georgia voters, U.S. Congress, Georgia lawmakers, election officials, and the press be provided with essential information

concerning the manner in which the electronic voting system failed in the 2018 mid-terms.

The systemic failures must be understood and their causes broadly communicated to protect the nation’s future elections.”