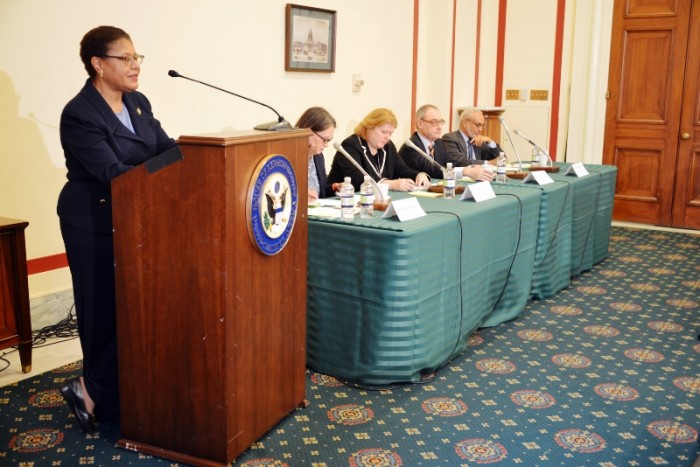 As the world continues to address the ongoing refugee crisis impacting Africa and Western Europe, Congresswoman Karen Bass (D-Calif.)–Ranking Member of the Africa Subcommittee–welcomed over 100 attendees who came to hear from American and European diplomatic leaders as well as representatives from organizations working to assist refugees to discuss how the United States and European nations should respond to the increasing number of migrants, including thousands of Africans, fleeing their home countries for Europe.

While much of the refugee discussion has focused on Syria, refugees from African nations are a significant number of the people arriving in Europe. According to the United Nations, in the first six months of 2015, 137,000 refugees and migrants arrived in Europe by sea. Over 20 percent of these refugees came from the African nations of Eritrea, Nigeria and Somalia.

“This year alone, we have seen several tragic reports of refugees and migrants drowning at sea in attempts to transit from Northern Africa to Southern Europe,” said Rep. Bass.

As Rep. Bass told the panelists and those attending, the goal of bringing together representatives from both the State Department and the European Union was not just to talk, but “to have the conversation to change policy.”

Calling the forum “both timely and critical,” Kathleen Newland, Senior Fellow and Co-Founder for the Migration Policy Institute, echoed the importance of having both members of Congress and the Obama Administration discuss the plight of Africans.

“It is extremely important that we continue to shine the spotlight on the plight of African refugees,” Ms. Newland said.

Anne C. Richard, Assistant Secretary of State for the Bureau of Population, Refugees and Migration, talked about her experience visiting a refugee camp in Ethiopia. She was struck by how young the refugees were who were in the camp.

“These were people who ought to be in school,” Ms. Richard said. “These were youth who had walked out of Eritrea to find a better life. When you have no hope, no future, this kind of roulette that you play with your life is the only thing that makes sense because at least you have a chance.”

Ms. Richard’s observations mirror official statistics from the United Nations released in June that found that over half the world’s refugees are children.

“This initial focus is on Syria, but we have a huge African sub-Saharan dimension to this problem, which we need constantly bear in mind,” Ambassador O’Sullivan remarked. “From a European perspective, we are more than conscious of that.”

Indeed official figures released earlier this week by the United Nations concluded that more than 700,000 migrants are estimated to have arrived in Europe so far this year.
And as Ambassador O’Sullivan reminded those attending, when refugees turn up on Europe’s doorstep they are need “immediate assistance.”

The Ambassador’s comments come in light of a recent announcement that leaders from several European nations have agreed to improve cooperation and step up consultation to tackle the refugee crisis in the region.

Dr. Tsehaye Teferra, President and CEO of the Ethiopian Community Development Council, detailed both African nations’ role in aiding refugees and encouraging the United States to do more.

“Africa has the largest refugee population in the world, with over 4 million, and most of the refugees are in Africa itself,” Dr. Teferra said. “The African countries are hosting refugees from their neighboring countries.”

In light of the numbers of African refugees being welcomed by African and European Nations, Dr. Teferra called on American policymakers to do more to help.

“This year the number of Africans refugees to be admitted to the United States will be 25,000 people. That is better than last year, but is it still enough?” Dr. Teferra questioned.

Earlier this month, Rep. Bass–along with 22 other members of Congress–sent a letter to Secretary of State John Kerry calling on the United States to increase its refugee intake ceiling for Africa from 25,000 people to 50,000 people next year.