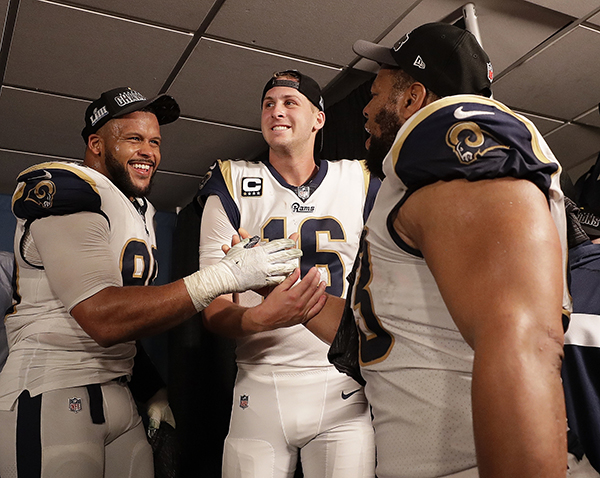 When the Los Angeles Rams’ team bus rolled into their suburban training complex after a boisterous flight from New Orleans, the players and coaches were greeted by rowdy fans welcoming home the new NFC champions in the middle of the night.

The Rams and their fans lost some sleep Sunday night _ but not about that missed pass interference on Nickell Robey-Coleman that could have altered the outcome of Los Angeles’ 26-23 overtime victory in the NFC championship game.

And after watching the tape of their remarkable win, the Rams had a few questions of their own for the officiating crew. 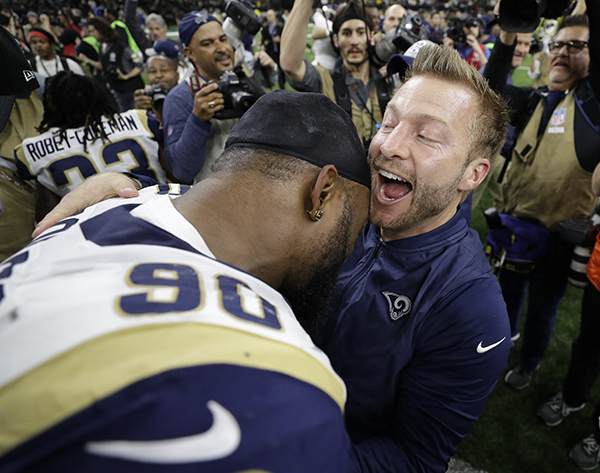 Specifically, the Rams couldn’t understand how the refs didn’t call Saints linebacker A.J. Klein’s apparent grab of Jared Goff’s facemask on the Rams’ previous drive. A penalty would have given a first down to the Rams at the New Orleans 1, putting them in prime position to take a 24-20 lead with a touchdown with 5:03 to play.

“When you slow it down, clearly you can see some of the things that took place. If you want to do that on every single play, though, there’s a lot of instances. You want to slow some things down with a facemask on Goff, some different things,” McVay said. “What we try to do a good job of understanding is that it is an imperfect game.”

The Rams’ latest victory wasn’t perfect, but it was historic. This franchise is still deep in the years-long process of rebuilding its once-huge fan base in Southern California after 21 years away in St. Louis.

A trip to the Super Bowl in just their third season back home is an awfully good way to send that process into warp speed.

The Rams are headed to their first Super Bowl in 17 years. The Rams had only two winning seasons in between those Super Bowl runs, but McVay’s team has swiftly reversed years of failure and put the Rams on the brink of Los Angeles’ first NFL championship since the 1983 season, when the Raiders won it all.

“We’ve been through a lot, and for us to go out there and grind through all this adversity just shows you how close we are in this room,” said guard Rodger Saffold, the longest-tenured Rams player in his ninth season. “The fans were excited for us to come back, and now, three years later, we’re on the biggest stage in sports. The city is electric for us.”

Aside from the late-game theatrics and twists, the Rams’ victory was even more surprising because of the relatively small role played by their biggest offensive star.

Todd Gurley touched the ball only five times, while backup C.J. Anderson led the Rams’ meager rushing game with 44 yards. Gurley was on the field for 32 snaps to Anderson’s 37, but last season’s Offensive Player of the Year didn’t look like himself.

McVay on Monday reiterated his claim that Gurley is fully healthy even though the running back missed the Rams’ final two regular-season games with an injured knee.

“He’s feeling good, and he sure looked pretty healthy on that touchdown run where he ran through guys and demonstrated some explosion,” McVay said. “More than anything, I’ve got to get him more opportunities.”