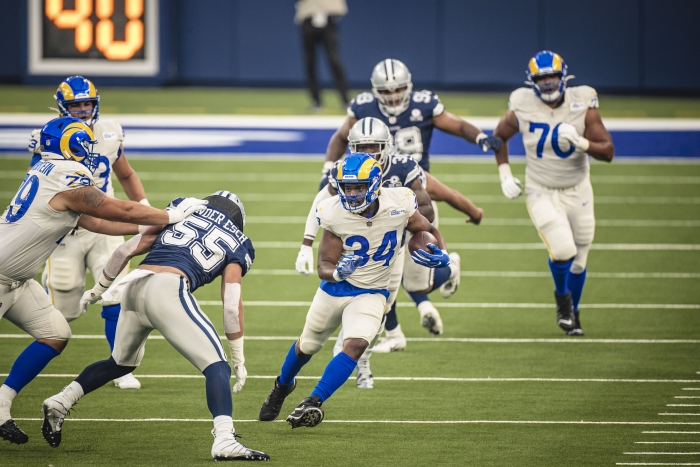 Running back (34) Malcolm Brown of the Los Angeles Rams against the Dallas Cowboys during the Rams 20-17 victory against the Cowboys in an NFL Week 1 regular season game, Sunday, September 13, 2020, in Inglewood, Calif. (Will Navarro/LA Rams)

The Los Angeles Rams defeated the Dallas Cowboys on opening night in their new five billion-dollar stadium. The only thing missing was thousands of fans from Southern California cheering them on. The Rams won 20-17 against a good team with stars such as Ezekiel Elliot, Dak Prescott, and Amari Cooper.

The Rams level of intensity brought defensively from Aaron Donald, and Jalen Ramsey was something fans were looking to see coming into this season. Even though they had to create their energy, Ramsey said that’s what the team prides themselves on. “That’s something we pride ourselves on doing anyway. That’s something I pride myself personally on doing is bringing a lot of energy, heart and passion for the game and try to be contagious, and I felt like we did that for the most.” There were ups and downs the Rams had to endure throughout the game, but they overcame stated Ramsey. “It was a tough game just like we knew it would be, Week one against a good Cowboys team, but we just persevered, we keep fighting, and we were able to come out with the win.” 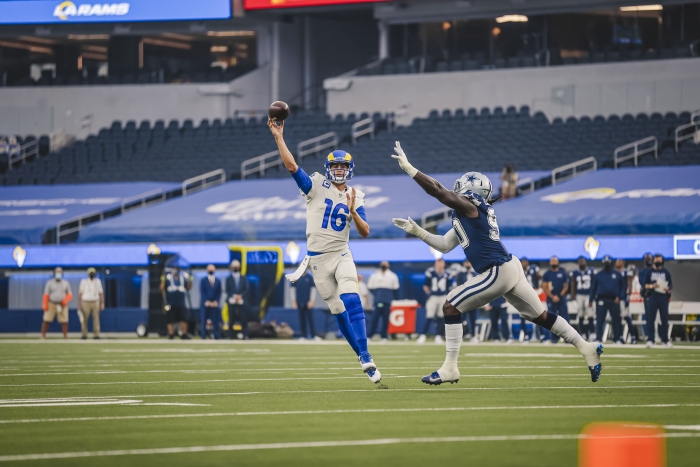 Ramsey was asked about what he would remember about tonight, and he brought things back to reality. He said it’s a difficult time for the team and the world. “We persevered through a lot of obstacles throughout this whole year and came out with a win to start the season 1-0 is what matters” Ramsey stated their new stadium is the best in the NFL. He stated that they did a great job with the field, locker room, training room, and the team was impressed. “I wouldn’t even call it a stadium, I would call it a complex or something,” Ramsey said jokingly.

Running back, Malcolm Brown, felt great about scoring the first touchdown at SoFi Stadium. He loved the gameplan; the Rams had come into the game and wants to stay ready when his number is called. “I have to be ready. That’s my mindset. It’s going to stay my mindset throughout the year. I really just got to show love to the big dogs upfront. They make it easy for me. To get two tonight, and have that first one at SoFi stadium, it’s exciting. I feel like it may live forever. It was cool.” 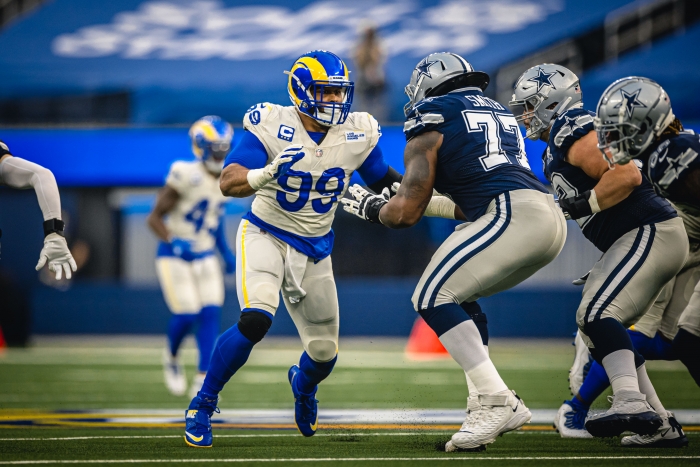 Rams defensive lineman Aaron Donald (99) made four quarterback hits and one sack (Courtesy of the L.A.Rams)

Donald said they want big-time plays from the veterans and younger guys when they need them the most. “I think they did a great job, overall we kept playing, and we found a way to win the game.” It felt different for the Cowboys with no fans, but they realized they had a game to win at the end of the day, stated Donald. “It was different not having that crowd behind you, but still at the end of the day, it was still football. It’s good to play here for the first time and come away with a win against a good team. We still got improvement to get better.”

The Rams look forward to growing as a team and nurturing their young players, such as rookie Jordan Fuller. He gave the team quality minutes and stepped up big when needed. Donald said Fuller is out there on the field for a reason. “He is a young guy that stepped up and made a big play for us to help win the game. So anytime you see that you’re excited, you’re pumped up. It’s one game, and he’s going to continue to get better.” Fuller got praise from multiple players on the team. Quarterback, Jared Goff, stated how he intercepted his pass in training camp, and that’s when he knew Fuller could play. He said he’s a great player and exciting to watch. “He does a lot of stuff in our defense that really fits him, and he’s a tremendous player.”

Rams will play the Eagles next Sunday in Philadelphia. 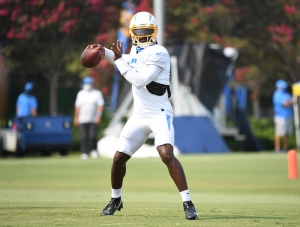