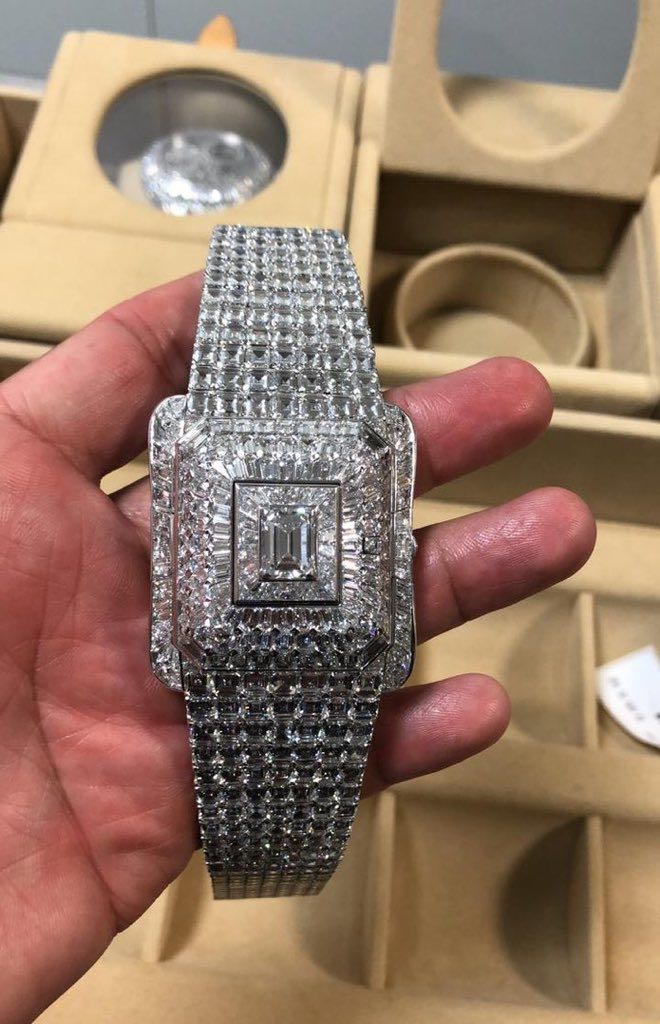 What does a suitcase full of million dollar watches look like?

Well, it’s blinding for one and it caught the eye of police at the Sao Paulo Viracopos airport in Brazil who confiscated the gem-encrusted time pieces found in the luggage of the son of the long-time ruler of Equatorial Guinea.

While Brazilian law prohibits people from entering the country with more than $2,000 in cash, the VP may have diplomatic immunity although the 11-member delegation traveling with him does not.

It’s not the first brush with the law by the president’s son. Last year, a French court delivered a guilty verdict in a case involving embezzlement and money laundering. Teodorin received a three-year suspended sentence. His assets – a 101-room mansion on the exclusive Avenue Foch, two Bugatti Veyrons, the most expensive car in the world, a Porsche Carrera, an Aston Martin and a Mercedes Maybach – were confiscated.

In 2014 Teodorin agreed to pay $30 million for properties in the U.S., Michael Jackson memorabilia and a private jet using money from the public treasury.

At the time, Teodorin was the country’s agriculture minister, earning an official annual salary of less than $100,000.

Despite the country’s significant wealth from oil, roughly half the population lack clean drinking water and half of all children who begin primary school never complete it. Some metrics, such as vaccination and school enrollment rates, have deteriorated since the start of the oil boom.

Tutu Alicante, founder of the local human rights group EG Justice, questioned the rationale for carrying cash for medical reasons.  “Why should the VP of Equatorial Guinea travel to Brazil for treatment when his father claims to have built Central Africa’s best hospital in Equatorial Guinea?”

Meanwhile, a visit by the International Monetary Fund to review a staff-monitored program has found progress on needed reforms but urged that the poor and vulnerable be shielded from any adverse effects of economic adjustment and social protection be strengthened.