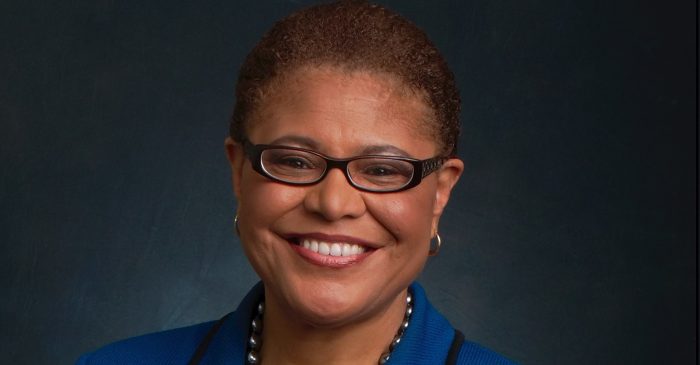 Karen Bass is a community organizer from South Los Angeles who became the first ever African American woman to serve as Speaker of any state assembly in 2008. She was recently re-elected to a fifth term in Congress. (courtesy photo)

The midterm election was nothing short of historic and yet again, our community is leading the United States of America towards progress.

According to a CNN exit poll, 90 percent of African Americans voted for a Democrat in Congressional races across the country last Tuesday, propelling the Democratic party to our first majority in the House of Representatives since 2009. In Georgia, 97 percent of Black women who voted, voted for Stacey Abrams to become the state’s first Black female governor.

It wasn’t just our desire to make history in Georgia that drew us to Stacey’s campaign. It was our collective understanding that a vote for Stacey Abrams was a vote to raise the voices of Georgians that have been suppressed for far too long. It was a vote for a new Georgia, and in turn, a new America.

But all progress is fought for. Like Stacey said on election night, there are people that tried very hard to keep certain voices quiet. I firmly believe that if this election had happened in a country with a developing democracy and there existed a similar scenario – one in which one of the candidates was in charge of overseeing the very election he was running in – the United States would rush to monitor the election to shine a light on this obvious conflict of interest. Such a contradiction by itself is worthy of scrutiny, especially if that scenario is playing out in a country, or a state, with a rich history of voter suppression on the basis of race.

But what happened in Georgia wasn’t just about job titles. This was about the misinformation that Stacey’s opponent peddled throughout the campaign and how he took advantage of his taxpayer-funded position to help run his campaign.

On the Sunday before the election, Stacey’s opponent, equipped with no evidence at all, announced that Democrats were under investigation for attempting to hack Georgia’s voter registration files.

Just over a week ago, a federal judge ruled that Georgia would be forced to change parts of its “exact match” protocol, a voting requirement that came under scrutiny leading up to the election when it was revealed that more than 65 percent of the voter registrants whose applications were rendered “pending” as a result of the law were African American.

This coupled with remarks from Trump threatening that any “illegal voting” would be met with “maximum criminal penalties” less than 24 hours before the first polls opened only further revealed a coherent strategy of voter intimidation.

But what’s redeeming about the democratic process is that voices will be heard one way or another. Once again, our community led the way towards progressive change in Florida and Louisiana, rebuking Jim Crow-era laws designed to strip our constitutional right to vote.

In Florida, we voted to restore the voting eligibility of millions of Floridians with past felony convictions. As a result, more than 1.4 million Floridians who were not allowed to vote in this past election will be able to in the next one. As of 2016, there were more than 400,000 Black people unable to vote due to felonies. Imagine the impact these voters will have in 2020.

In Louisiana, we passed a proposition eliminating another Jim-Crow-era law that allowed juries to convict someone without a unanimous decision.  Researchers claim this is a back door created to make it easier to put Black folks in jail in the South.

That law is no more. This is the change we bring when we vote.

It will have two Latina Congresswomen from Texas for the first time ever.

It will have an African American Congresswoman from Massachusetts and Connecticut for the first time ever.

It will have two Native American Congresswomen for the first time ever.

It will also have two Muslim Congresswomen for the first time ever.

This will also be the first time that there will be a check on this President and his administration.

This is the change we bring when we vote.

We now have a House of Representatives that will focus on restoring our voting rights and putting justice back into the criminal justice system.

It’s time to make the history we’ve always desired. We now have a House of Representatives that will fight for the people.

Karen Bass is a community organizer from South Los Angeles who became the first ever African American woman to serve as Speaker of any state assembly in 2008. She was recently re-elected to a fifth term in Congress.