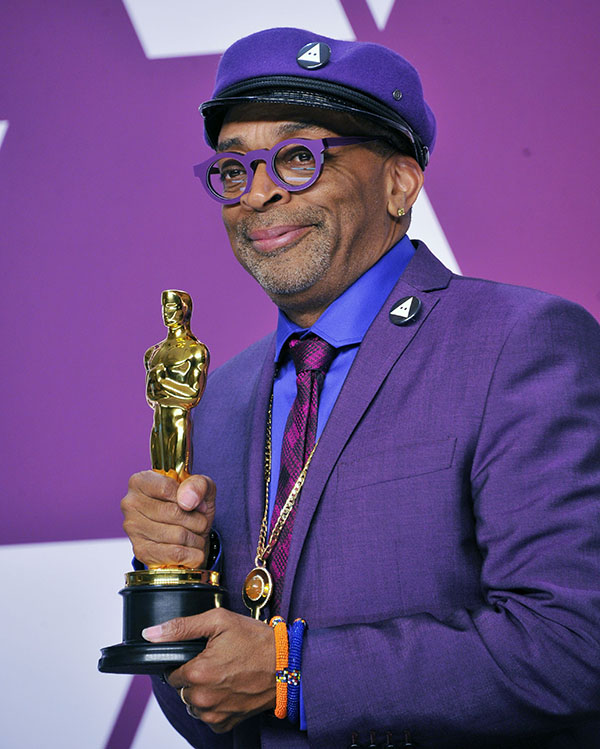 The 2019 Oscar celebration will be remembered for many key moments, which began when Powerhouse, Kevin Hart stepped away from his hosting duties and it followed in a strange set of unseen wins, the most puzzling being the Best Picture win for the very controversial “Green Book” leaving the great filmmaker, Spike Lee to win Best Adapted Screenplay for his work on his film BlacKkKlansman. His collaborators Charlie Wachtel, David Rabinowitz, and Kevin Willmott were also honored. In total, the film was nominated for five Oscars, including Best Picture, Best Director, and Best Original Score.

In Lee’s emotional and often hilarious acceptance speech on the Oscar stage, he encouraged, and correctly, for people to vote and the mobilize for the 2020 presidential election, urging them to “Make the moral choice between love versus hate. Let’s do the right thing!”

The following morning, the President of the United States of America responded on Twitter, calling the Oscar-winning directors comments “racist.” Lee’s exact words were “The 2020 presidential election is around the corner,” Lee said. “Let’s all mobilize. Let’s all be on the right side of history. Make the moral choice between love versus hate. Let’s do the right thing!”

Correct me, but the above words did not qualify as a racist comment.  Words are power. Make no mistake.  Such is the power of storytellers and storytellings. “They” want us to believe that creative people are powerless and that’s simply not true.

According to the Academy historians, who were onsite to answer facts, Lee has received five nominations, earned one competitive win and received an Honorary Oscar, in 2015.

Los Angles Sentinel: How are you feeling?

Spike Lee:  This is my sixth glass.  And you know why.

LAS:   I want to say the Academy did the right thing by giving you this award.

SL: Thank you very much.

LAS: What would you say to Ron now that you have this award for writing this film?

SL: Well, first of all, he lived that life.  He infiltrated the Klan.  He talked to David Duke on the phone.  He was David Duke’s bodyguard, and he lived to write a book to tell about it.  Next.

LAS: I just wanted to ask you, we saw a little bit of a reaction to the GREEN BOOK win.  Can you give us your thoughts on that Best Picture win?

SL: Let me take another sip.  Next question.  Oh, wait a minute.  What reaction did you see?  What did I do?   No.  I thought I was courtside at the Garden.  The ref made a bad call.  The world’s most famous arena, Madison Square Garden.  Knicks are coming back next year.

LAS: You’ve been a critic of the Academy for some years.  How do you feel about the progression of Black filmmakers after this year?

SL:  Here’s the thing.  Without April Green … April Reign, excuse me, without April Reign, #OscarsSoWhite, and the former president of the Academy Award of Motion Picture Sciences, Cheryl Boone Isaacs, I wouldn’t be here tonight.  They opened up the Academy to make the Academy look more like America.  It’s more diverse.  So that’s why three Black women if I’m counting correctly, won Oscars.  That would not have happened without #OscarsSoWhite and Cheryl Boone Isaacs.  Facts.  As my brother, Jay Z says, facts.

LAS:  That reaction we saw of you and Samuel L. Jackson, walk us through that just a little bit.  Talk about that moment.

SL: Well, first of all, Samuel Jackson and I went to the same college.  We went to Morehouse College, so I’ve known Sam from way, way, way back.  These were my school SCHOOL DAZE.  We were very close, our families, and for him, my brother Samuel Jackson, to open up the envelope and say my name, it was a great thing.  And did I jump up on him? 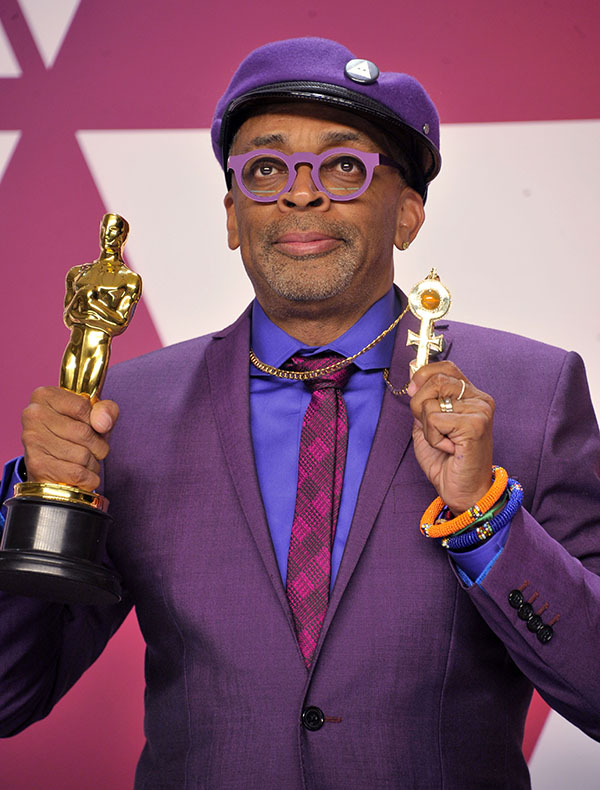 SL: Let me take another sip.  That was a genuine, genuine reaction.  And my co-writers all look, it’s not just for me, the people in front of the camera and behind the camera, and I was just  … here’s the thing though.  I had two speeches.  Now, I’m going to call this “I’m keeping it 100.”  That means I’m keeping it real, for those that don’t live in Brooklyn, New York, 100.  Had two speeches; one with a list of the people I was going to thank and the other one was what you heard me say.  So I said to myself, “Self, your Black ass may not be up here again, so let me go with the speech.”  And I did not get to read the one with the thanks.  So I apologize for the people I didn’t get a chance to thank.

LAS:  He’s [Samuel L. Jackson] back in the day.  But I have a different kind of question.  You mentioned David Duke, the whole thing.  Do you think he’s watched the movie?  And if he has or if he hasn’t, what’s your message to him?

LAS: What do you have to say to him?

Here’s where the body language spoke volumes … moving on

LAS:  I’m in this room because of Cheryl Boone Isaacs, FYI.  So I was interviewing Robi Reed, and she helped me compose this question.  She told me that she was part of your A team, and she told me it was a really beautiful interview what it was like in the early days.  And so the question is:  Spike, what keeps you motivated after all this work?

SL: Well, I’m one of the blessed people in the world who gets to make a living doing what they love.  It’s simple.  Most people who go to their grave have worked a job they hated.  That’s it.

LAS: Obviously, a lot was said about DO THE RIGHT THING in ’89.  How have you changed, do you think, as a filmmaker?  If you made that film today, how might it be different …

SL: I do not answer hypothetical questions.  The film was made when it was made, but the thing is, the film, I wrote that in ’88 and in ’88 I was talking about gentrification, ’88 I was talking about global warming and that stuff.  June 30 this year will be the 30th anniversary of DO THE RIGHT THING, and all the stuff we talked in that film is still relevant today.

SL:  Well, that’s a hard question for me to answer, but I do know that the coda of this film where we saw homegrown red, white and blue terrorism.  Heather Heyer, her murder was an American terrorist act.  When that car drove down that crowded street in Charleston (sic), Virginia and the President of the United States did not refute, did not denounce the Klan, the alt-right, and neo-Nazis.  And this film, whether we won Best Picture or not, this film, this film will stand the test of time being on the right side of history.  Thank you. 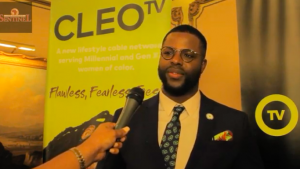