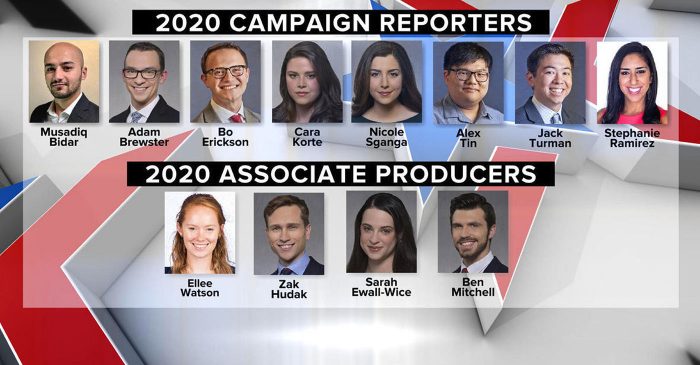 CBS News said its diversifying – adding a mix of women and minorities to its top staff and its upcoming 2020 election coverage.

But, many are calling the “Eye” Network’s attempts at diversity an epic fail.

The network is taking some serious heat for excluding African-Americans from its core team of on-the-ground reporters and producers set to cover the 2020 presidential campaign cycle – an election that’s viewed almost universally as critical to Blacks and other minorities.

Among the eight reporters, four reportedly are persons of color: Musadiq Bidar, a native of Afghanistan, Alex Tin, Jack Turman and Stephanie Ramirez. But, none are African American.

“African American voters were the headline in election turnout in 2016, 2017, 2018 and will be a key campaign story to watch leading up to the 2020 election.

It was such a mindless thought for CBS to exclude African Americans from such an important team, when it comes to news and information. CBS has such esteemed personalities and producers. Off the top you have Gayle King, Michelle Miller, Errol Barnett, Pat Harvey, James Brown, Jericka Duncan and so many others, in front of the camera as well as behind it.

The Black Press has been around for over 100 years telling our stories across this nation and we’d be happy to provide suggestions, if need be. CBS needs to do better and live up to its claim of diversity!”

“CBS, the efforts on your website about your support for diversity fly in the face of your display of all of the reporters you’ve selected for the 2020 campaign,” Democratic California Congresswoman Maxine Waters tweeted.

“Not one Black. What’s up with this? An explanation is needed.”

New York Democratic Rep. Alexandria Ocasio-Cortez said the current administration in the White House made having a “functional understanding of race in America one of the most important core competencies for a political journalist to have, yet CBS News hasn’t assigned a single Black journalist to cover the 2020 election.”

The NAACP, the nation’s leading civil rights organization issued the following statement: “CBS News’ decision to not include Black reporters on their 2020 Election news team further proves the voting power and voices of Black America continue to be undervalued. As the voting bloc which will most certainly heavily determine the direction of this country in the upcoming election, it is vital any and all media outlets have a diverse newsroom, including individuals of color in decision making positions to speak to and address the issues and concerns directly impacting the Black community. Representation matters and the media needs our coverage on the issues to drive the discussion.”

“Dear @CBSNews, I am encouraged by the diversity you DID include. But when it comes time to discuss the inevitable role that race and racism will play in the election, who will you turn to for a perspective with nuanced & personal understanding of the African American experience?”

Christopher Isham, CBS News’ Washington bureau chief, called the new group “our boots on the ground for the 2019-2020 election cycle” in announcing an increase in politically-focused reporters and newsgathering resources for the upcoming presidential race.

The unit is designed to deepen CBS News’ coverage of federal and local issues and personalities on the 2020 trail, according to Variety.

CBS News noted that the embed team represented only a portion of its broader election coverage plans. Lorna Jones, who is African-American, was promoted last month to the role of managing editor for Washington news coverage, Variety reported.

And the division has long maintained other prominent African-American women in senior management roles, according to the entertainment magazine.

“This group is the initial wave of what will be an outstanding and diverse group of journalists assigned to cover the 2020 election for CBS News,” a CBS News spokesperson said Sunday night.