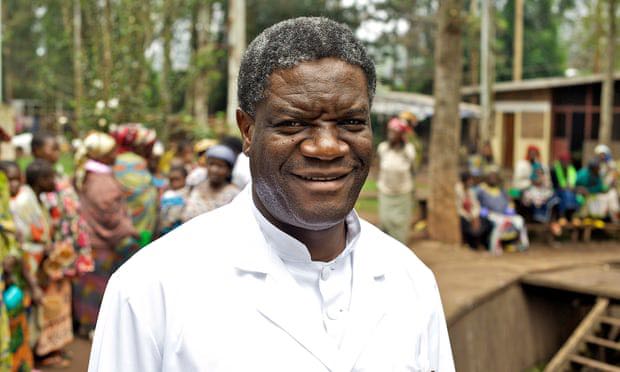 “For 15 years, I have witnessed mass atrocities committed against women’s bodies and I cannot remain with my arms folded because our common humanity calls on us to care for each other.”

Those were the words of Dr. Denis Mukwege, a physician working in one of the most dangerous regions of the world. Now, Dr. Mukwege, founder of Panzi Hospital in the Democratic Republic of Congo, and Nadia Murad, an Iraqi survivor of sexual violence, are this year’s co-winners of the Nobel Peace Prize for their efforts to end the use of sexual violence as a weapon of war.

Known as the rape surgeon, Dr. Mukwege has helped care for more than 50,000 survivors of sexual violence even as he himself is at risk and attacks against women are on the upswing.

“I’m sorry to say that three years ago the situation was better but now many armed groups are growing again and the number of women who are raped is increasing again,” Dr. Mukwege told the BBC.

The 63-year-old Congolese gynecologist set up the Panzi hospital nearly 20 years ago, shortly after his first experience treating a woman who had been raped and mutilated by armed men.

His crusading work has seen him honored on many occasions, receiving the Olof Palme Prize in 2009, the Sakharov Prize five years later, and the Seoul Peace Prize in 2016. He has been nominated for the Nobel award on numerous previous occasions.

He has also been recognized by the United Nations, which he addressed in 2012, criticizing the Congolese government and neighboring countries for pursuing “an unjust war that has used violence against women and rape as a strategy of war.”

Panzi hospital now cares for more than 3,500 women a year. Sometimes Dr. Mukwege performs as many as 10 operations a day. It has grown to be a major health facility in eastern DR Congo with over 300 doctors, nurses and support staff.

U.S. playwright Eve Ensler wrote: “He has not only saved lives, he has also travelled the world to bring attention to these women’s fate, everywhere from the UN to the European parliament to Washington DC. He – together with women survivors – has woken the world to the use of rape as a tactic of war and armed conflict in DRC and elsewhere.”

“City of Joy,” a documentary which spotlights the survivors and Dr. Mukwege’s work, is available on Netflix.