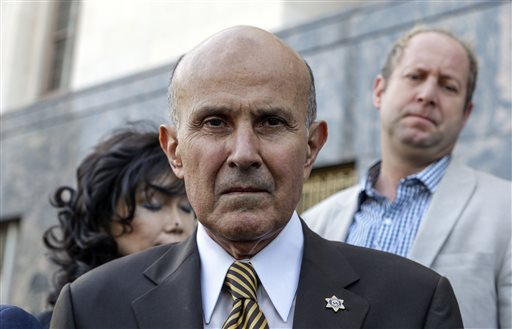 Former Los Angeles Sheriff Lee Baca, middle, leaves the U.S. Court House building in Los Angeles on Wednesday, Feb. 10, 2016. Baca signed a plea agreement that said he ordered deputies to intimidate an FBI agent and “do everything but put handcuffs on her.” Baca later lied to federal prosecutors and the FBI that he wasn’t privy to discussions about trying to derail the investigation. (AP Photo/Nick Ut)

A new plea deal for ex-Sheriff Lee Baca could not be reached on a federal false statements charge, leaving him with the option of accepting what’s expected to be a harsh sentence or withdrawing his previous guilty plea and awaiting new charges.

On Aug. 1, U.S. District Judge Percy Anderson rejected a plea agreement that would have given Baca a maximum of six months in prison for lying to investigators, saying the sentence was too lenient considering the retired lawman’s role in obstructing an FBI investigation into Los Angeles County jails.

Anderson said the deal “would trivialize the seriousness of the offenses.”

Baca was left with the option of attempting to negotiate a new deal for a sentence that Anderson might accept or going forward with sentencing on the original plea. Or, Baca could withdraw his guilty plea and face trial on whatever charges prosecutors decide to bring against him.

Baca’s attorney, Michael Zweiback, told City News Service that the first option was off the table since no new deal with federal prosecutors was reached during the past two weeks.

The attorney said his 74-year-old client would make his decision Monday at the scheduled hearing before Anderson.

Baca pleaded guilty in February to a single federal count of lying to federal investigators. The charge carries a five-year maximum sentence, the same amount of time that Baca’s former second-in-command, Paul Tanaka, received after going to trial in a related obstruction-of-justice case.

At the previous hearing, Anderson suggested that Baca had played a key role in a wide-ranging obstruction attempt that did “substantial harm” to the community.

“It’s one thing to lie to an assistant U.S. attorney,” Anderson said. “It’s another for the chief law enforcement officer of Los Angeles County to … cover up abuse in Men’s Central Jail.”

To impose a six-month sentence “would not address the gross abuse of the public’s trust,” the judge said, adding that such a penalty “understates the seriousness of the offense.”

Baca admitted to lying to investigators in 2013 when he said he was unaware that sheriff’s deputies were going to the home of an FBI agent to confront and threaten her over her involvement in the probe of corruption within the department.

The same year Baca committed the offense, he was named Sheriff of the Year by the National Sheriffs’ Association.

The rejected plea agreement — which one of Anderson’s colleagues on the federal bench called “troubling” — was widely seen as too lenient, especially after Tanaka was sentenced.

Hundreds of letters in support of probation for Baca were filed with the court.

Baca entered his plea Feb. 10 after denying for years that he had played any role in the wide-ranging scandal that stained the department and led to his retirement.

“I made a mistake and accept being held accountable,” Baca said in a written statement issued on the courthouse steps following his plea hearing.

According to the now-rejected plea agreement, Baca agreed not to contest other allegations leveled by prosecutors, including that in 2011 he directed subordinates to approach the FBI agent, stating that they should “do everything but put handcuffs’ on her.

Prosecutors also accused Baca of lying about his involvement in hiding a jail inmate from FBI investigators. Baca, they alleged, ordered the inmate to be isolated, putting Tanaka in charge of executing the plan.

In addition, Baca falsely claimed he was unaware that some of his subordinates had interrupted and ended an interview FBI agents were conducting with the inmate, who was working as a federal informant, prosecutors alleged in the court documents.

Baca retired in 2014 at the height of the federal probe. He had been sheriff since December 1998.

Prosecutors have said that Baca lied to investigators to either avoid “political fallout” or to avoid more severe criminal charges.