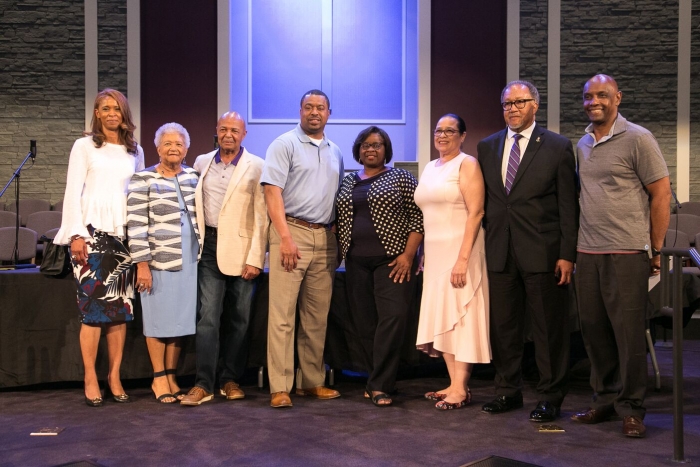 Parents, educators, elected officials and community members filled the Corinthian Baptist Church as they engaged in a lively discussion about the Every Student Succeeds Act (ESSA), the education law that reauthorized the Elementary and Secondary School Act (ESEA) and replaced No Child Left Behind.

ESSA received bipartisan support and was signed into law by President Barack Obama in 2015. The regulations are administered by the U.S. Department of Education and went into effect in 2017.

The town hall is part of a broader NNPA Public Awareness Campaign which is sponsored by a grant from the Bill & Melinda Gates Foundation.

Under ESSA, states across the country adhere to more flexible federal regulations that provide for improved elementary and secondary education in the nation’s public schools.

The law also ensures that every child, regardless of race, income, background or zip code has the opportunity to obtain a high-quality education.

With the grant from the Gates Foundation, the NNPA, a national trade association of approximately 211 Black and women-owned U.S. media companies, has worked to empower parents to advocate for instructional strategies that are in the best interest of their students and communities.

“If you look at some of the research of the 30 million word gap study, it shows that by the time kids in poverty go to school, they’ve heard 30 million fewer words than [other] children,” said NNPA’s ESSA program manager Dr. Elizabeth Primas, who was among the panelists at the Town Hall.

“As parents, we need to start reading to our children in vitro so they hear the sounds of our voices and when they start talking they are able to speak in story language,” Primas said.

Mitchell noted the progress of the CPS.

She said they’ve partnered with various employers and corporations to train and place students in jobs after graduation.

“It’s all about getting kids to a place beyond graduation,” Mitchell said.

Turner said the NAACP has always been vigilant about education and concerned about the future of young African American students.

“Our children don’t have the tools of the more affluent neighborhoods, so we have to bring resources to them or point out to where city government has to do better,” Turner said.

“We also have to look at where schools are not on top of the trauma a lot of our kids are experiencing, so we want to make sure that our teachers and administrators are treating our kids the same they do with kids in other neighborhoods and kids with different backgrounds,” Turner said.

White noted the CPS Preschool Promise Program, that served more than 1,300 families during the first year of its operation two years ago.

Preschool Promise has succeeded in providing financial assistance to families because of a five-year CPS levy that voters approved three years ago.

The levy reportedly generates $15 million per year to expand families’ access to quality preschool and the program targets less affluence families because CPS and other research show that low-income children are less likely to be prepared for kindergarten.

Cincinnati reportedly has more than 4,000 three – and four-year old children who live at or below the federal poverty level, according to the U.S. Census Bureau estimates.

“Eighty percent of the brain is developed by age four,” White said.

“We said we would reach the children who need [reaching] the most. We know that kids are living in extreme poverty and facing adverse issues. Preschool Promise covers all so that parents have the opportunity to choose what’s best for their children,” White said.