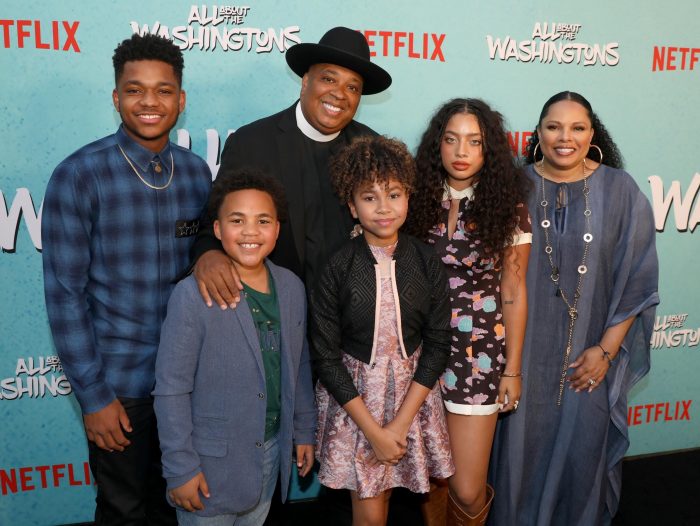 There was a family affair August 8th in Hollywood at Madera Kitchen where Rev Run and Justine Simmons accompanied by their on-screen family graced the red carpet for the premiere of “All About The Washingtons on Netflix.” “All About The Washingtons” is a family sitcom based on the real life of the Simmons family. Joey Washington (Rev Run) recently retired from touring is trying to adjust to not being in the spotlight, having a greater physical presence to their four children, and being moral support to his wife Justine as she ventures into the world of entrepreneurship.

“I feel like they have a lot of the same tendencies other parents have; especially with dads being overprotective in ways they shouldn’t be, but their really trying to look out for their daughters so there’s definitely some similarities,” Kiana Ledé said when asked about the similarities between her fictional parents and her real parents. Kiana plays Veronica; the oldest daughter to Joey and Justine who is a recent college graduate dealing with the everyday struggles of being a young adult. Kiana; a respectable singer in her own right released her third album “Selfless” in July.

Kiana’s on-screen siblings are played by Maceo Smedley (Daevon), Leah Ross Randall (Skyler), and Nathan Anderson (Wesley). “Rev is an absolute legend,” Anderson said. so just to be around somebody that not only knows what he’s doing, but can point some knowledge on you; that’s great!” Nathan is the real life son of Anthony Anderson, the star of the hit ABC series, “Black-ish.”