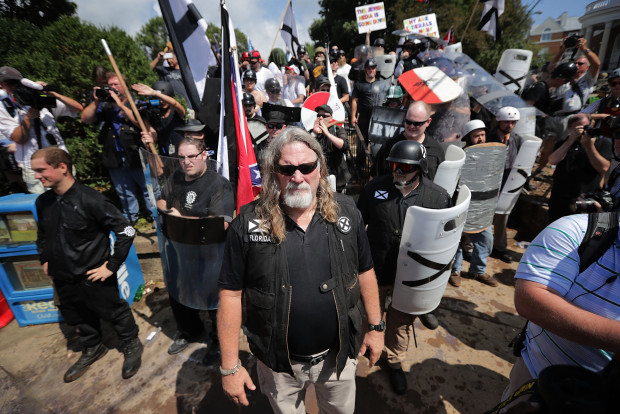 White nationalists, neo-Nazis and members of the “alt-right” exchange insluts with counter-protesters as they attempt to guard the entrance to Lee Park during the “Unite the Right” rally August 12, 2017 in Charlottesville, Virginia. After clashes with anti-fascist protesters and police the rally was declared an unlawful gathering and people were forced out of Lee Park, where a statue of Confederate General Robert E. Lee is slated to be removed. (Photo by Chip Somodevilla/Getty Images)

Condemnations rained upon the White supremacists, neo-Nazis and alt-right members who staged the atrocious “hate-fest” as conservatives, liberals, Democrats and Republicans joined the chorus of outrage along with clergy, business leaders and community activists.

Former President Barack Obama tweeted a photo of himself peering at young children through a window, with the message, “No one is born hating another person because of the color of his skin or his background or his religion … ‘People must learn to hate, and if they can learn to hate, they can be taught to love. For love comes more naturally to the human heart than its opposite.’ – Nelson Mandela.” 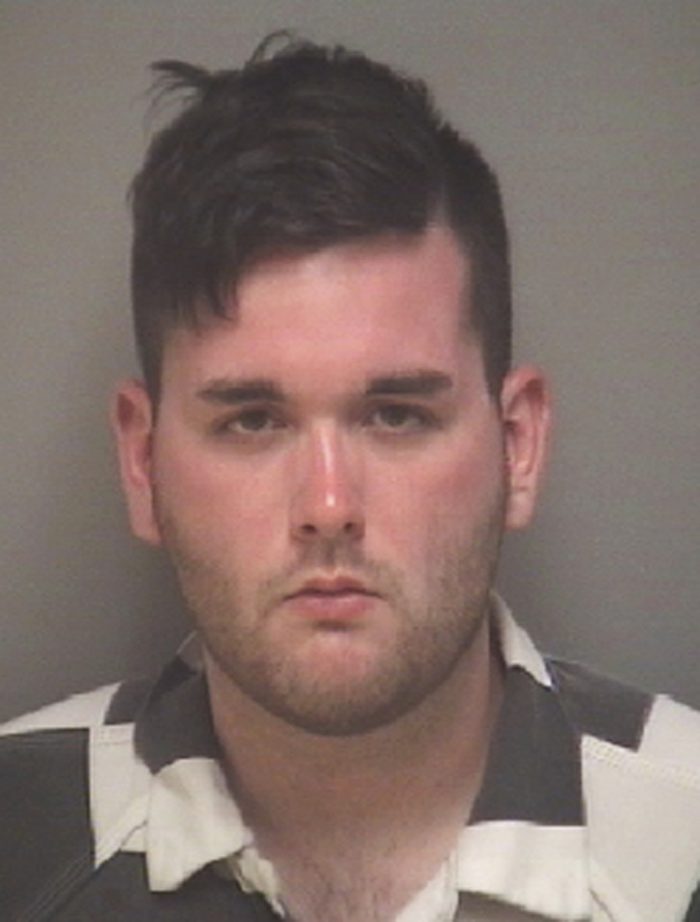 Even President Donald Trump, after a two-day delay, finally acknowledged and denounced the real perpetrators by stating on August 14, “…those who cause violence in its name are criminals and thugs, including the KKK, neo-Nazis, White supremacists, and other hate groups that are repugnant to everything we hold dear as Americans.”

However, the Rev. Jesse Jackson was not impressed by Trump’s remarks and responded, “His statement is too little, too late, too weak.  Not believable.”

Commentators did offer an abundance of condolences to the families of Heather Heyer, a counter protestor who was killed by a white supremacist sympathizer, and Troopers Jay Cullen and Burke Bates, whose helicopter crashed as they assisted law enforcement. Observers agree that these tragedies resulted from the actions of armed, White men who decided to march chanting racial slurs against African Americans, Jews, Muslims, LGBTQs and other minorities.

Some people were appalled that White men were bold enough to mount a hateful protest for their rights in 2017. But others expressed sadness that a “Unite the Right” rally can draw hundred of participants in 2017.  The conclusion leads many to believe that race relations have made miniscule progress in the United States, even in 2017. 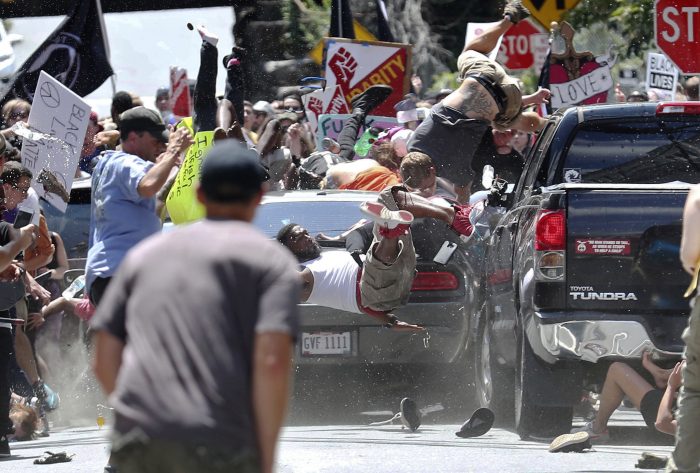 People fly into the air as a vehicle drives into a group of protesters demonstrating against a white nationalist rally in Charlottesville, Va., Saturday, Aug. 12, 2017. The nationalists were holding the rally to protest plans by the city of Charlottesville to remove a statue of Confederate Gen. Robert E. Lee. There were several hundred protesters marching in a long line when the car drove into a group of them. (Ryan M. Kelly/The Daily Progress via AP)

Commenting on the horrific incident, U.S. Senator Kamala Harris said, “To some Americans, this was shocking and scary. They asked themselves how could this happen – in the United States of America – in 2017? To other Americans, what they know is, Charlottesville exemplifies an undeniable reality that lurks just beneath the surface in this nation we love.”

Derrick Johnson, NAACP interim president and CEO, noted, “It’s hard to believe that in 2017 we are still plagued by so much race-based hatred. These kinds of actions should come as no surprise, however. We are living under an administration that campaigned on hatred, discrimination and xenophobia. They have given permission and a platform for bigots, like the right-wing, White nationalists in Charlottesville, to thrive and spread violence.”

“Horrifying expressions of White supremacy and Nazi sympathies sadly are nothing novel in the United States, even in the 21st century.   What we are witnessing is a failure of our national institutions,” said Marc H. Morial, president and CEO of the National Urban League.

Speaking plainly, Asian Americans Advancing Justice stated: “The events in Charlottesville exposed an ugly underbelly in America that communities of color face on a daily basis.” 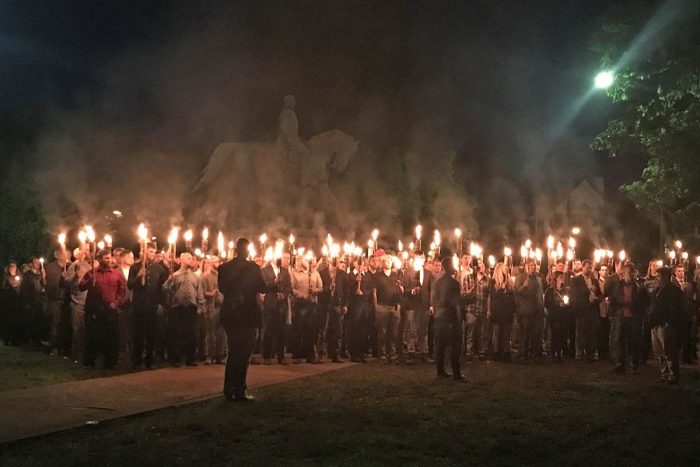 Though progress appears to be suffering a setback, a range of voices promptly spoke out to affirm the diversity of America and commit to fight against racism.

“It is essential to note that the black community must oppose terrorism in all its forms…We in the church must provide moral leadership to show how we vigorously pursue justice while maintaining a compassionate tone in discourse with those with whom we disagree,” urged Bishop Charles E. Blake, Sr., presiding prelate of the Church of God in Christ, Inc.

“We join in the great cloud of witnesses throughout the country who reject hate speech and intolerance as an acceptable form of public expression, and we condemn, in the strongest terms those who intentionally incite violence to advance a political agenda,” declared the Rev. John E. Cager III, president of the Los Angeles Council of Religious Leaders.

In a statement, Jennifer Warner of Organizing for Action, insisted, “The kind of bigotry we saw this weekend is not new in our country, but it’s as important as ever to stand together in solidarity and reject this ugly ideology.” 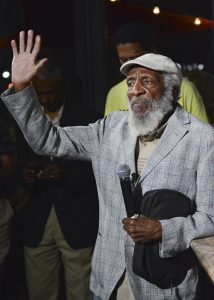 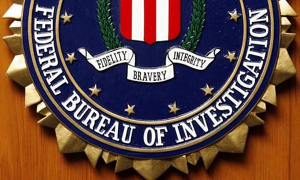 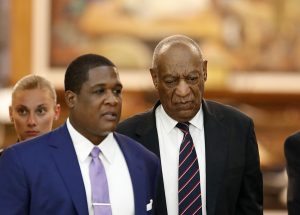 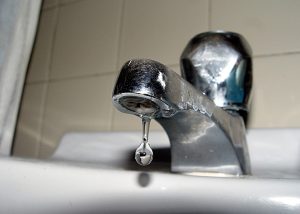