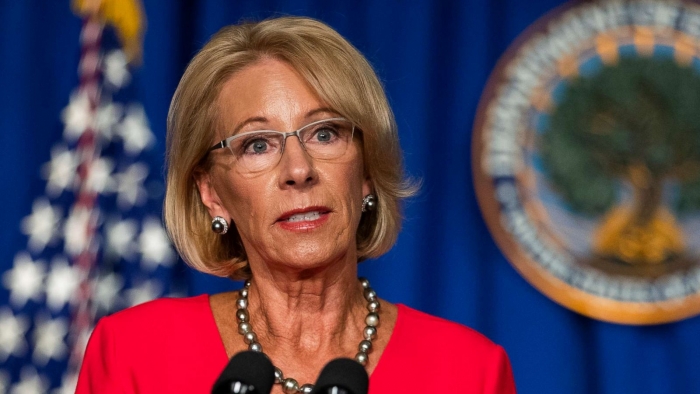 The coronavirus pandemic has focused the nation’s attention on the essential role public schools play in families and communities’ lives.

Rather than addressing those problems, NAACP President Derrick Johnson declared that U.S. Secretary of Education Betsy DeVos “exploited the pandemic to promote her personal agenda of funneling taxpayer dollars to private schools and taking resources away from the schools and the students who need it most.”

“We simply can’t let this happen. So, we’re taking her to court,” Johnson announced.The NAACP formally filed a lawsuit in federal court in Washington, D.C., accusing DeVos of illegally changing the rules for allocating $13.2 billion in Coronavirus Aid, Relief, and Economic Security Act (CARES) money to benefit wealthy private k-12 schools.“Recently, Secretary DeVos issued regulations that would force public school districts to divert federal emergency relief funds from public schools and send them to private schools. By one estimate, over $1 billion would be lost to private schools under the rule,” Johnson declared.

“So, the NAACP filed a lawsuit along with public school families and school districts across the country, challenging this unfair, unequal, and unjust rule. We’ll fight this as hard as it takes – for as long as it takes – to protect our students, schools, and communities.”

The NAACP’s lawsuit suggests that the CARES Act, which was signed by President Donald Trump earlier this year, says explicitly that local school departments are to distribute the fund based on the number of Title I, or low-wealth students, in a particular school.

Congress allowed CARES funds to go to institutions that depend on tuition and donations because lawmakers said they recognized that some students from low-income families attend private schools.

The lawsuit claims the share going to private schools should have its basis on the number of Title I students attending those schools.

DeVos did not follow that rule, the NAACP contends, spelling out that hundreds of millions of dollars in CARES Act funds would immediately divert from public schools to affluent private schools.

The controversial education secretary reportedly holds a different interpretation of how local school districts should distribute the money.

Her interim final rule allows sharing the money equally with private schools based on the number of students in those schools, regardless of how many are Title I students.

“The Rule is as immoral as it is illegal,” NAACP lawyers argue.

The NAACP filed the lawsuit on behalf of a group of parents and their children, who are enrolled in economically disadvantaged public schools. The Pasadena, California, Unified School District, and Stamford, Connecticut, School District, joined the NAACP in the lawsuit asking for an injunction to prevent DeVos from immediately instituting her change to the rule.

“In this moment of crushing need for America’s public schools, the Rule directs public school districts to divert desperately needed CARES Act 1 funds to affluent students in private schools or face unlawful limitations on the way that those funds can be spent – both in direct contravention of the Act,” the lawsuit reads. “The Rule harms American children and subverts the will of Congress; it cannot stand.”

If allowed to proceed, the DeVos’ rule would change public schools, including some in which “80, 90 and 99 percent” of the students are from low-income families.

“She’s trying to increase allocation disproportionately for private schools over public schools in the midst of the debate over whether or not schools should reopen. It’s horrific what she’s doing,” Johnson told ABC News. “What will happen is you further take money away from children who are financially in need to benefit high-wealth children.”