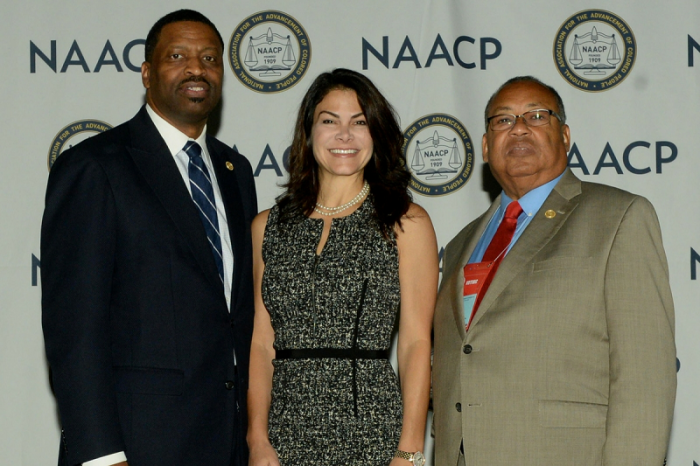 Derrick Johnson, president and CEO of the NAACP, Belinda Johnson, Airbnb’s Chief Operating Officer and Leon Russell, chair of the NAACP Board Photo Courtesy of Airbnb

Last year , the NAACP, the country’s original and largest social justice organization and Airbnb, the world’s leading hospitality company, formed a national partnership to help spread the economic benefits of home sharing to more communities. On Wednesday, June 13th, the two organizations announced that the partnership would go live in Los Angeles, bringing the first-of-its-kind program to the city of Angels.

“For too long, Black people and other communities of color have faced barriers to access new technology and innovations,” said Derrick Johnson, president and CEO of the NAACP. “This groundbreaking partnership with Airbnb will help bring new jobs and economic opportunities to our communities. ”

In addition to the targeted outreach, the NAACP and Airbnb have entered into a unique revenue sharing model. Airbnb will share 20 percent of its earnings with the NAACP. That money will be used to help the group with its core mission to fight for justice and economic opportunities for African Americans.

As a true global capital in an ever globalizing and more mobile world, Los Angeles’ role as a vacation destination is also setting new records. A recent study from the Los Angeles Tourism & Convention Board found a record 48 million visitors to Los Angeles generated more than $22 billion in 2017.

With travel and tourism growing faster than most of the rest of economy, it is critical that as many people as possible are benefiting. This monumental agreement will help bring economic benefits to South Los Angeles communities that, to date, have been neglected by the tourism industry. Airbnb and local NAACP chapters will conduct grassroots, community-based campaigns in the greater South Los Angeles area to educate people on the benefits of being an Airbnb host and show people how to use their homes to make extra income.

“We’re incredibly excited to launch this partnership in Los Angeles as one of the first local programs in the nation,” said Janaye Ingram, Airbnb’s Director of National Partnerships. “The NAACP is unrivaled in its network of grassroots, local advocates. The organization’s tireless work to expand economic opportunities and inclusion for minority communities will be a crucial element of this partnership and we look forward to collaborating with their talented team here in Los Angeles and across the country.”

South Los Angeles is excited to attract new visitors to the community, including at the new Major League Soccer Stadium for the Los Angeles Football Club, the Lucas Museum, and a new football stadium where both the Rams and the Chargers will play in neighboring Inglewood. Home sharing will allow hundreds of local residents to share their homes while capitalizing on this new wave of tourism.

“This partnership here in Los Angeles will be enormously impactful to underrepresented communities and ensure that guests coming to the city get the chance to see some of the most historic and undiscovered neighborhoods in the region,” said Ron Hasson, Beverly Hills Hollywood NAACP President. “We are looking forward to working together with Airbnb on the ground here in Los Angeles.”

Peggy Sturdivant is one of many Airbnb hosts in the Los Angeles area who uses her home to supplement her income. As a senior, living on a fixed income, she relies on home sharing to help pay her monthly bills.

For Peggy, hosting has meant not having to sell her Uncle Unk’s South Los Angeles home after he passed away. It has allowed her to preserve his legacy while sharing his story with travelers from around the world.

In Los Angeles, hosts like Peggy earned roughly $8800 a year in important supplemental income and in fact, one third of hosts in Los Angeles say that sharing their home on Airbnb has helped them avoid foreclosure or eviction. This 21stcentury partnership between the NAACP and Airbnb will continue this pattern and drive new economic activity to communities in South Los Angeles.