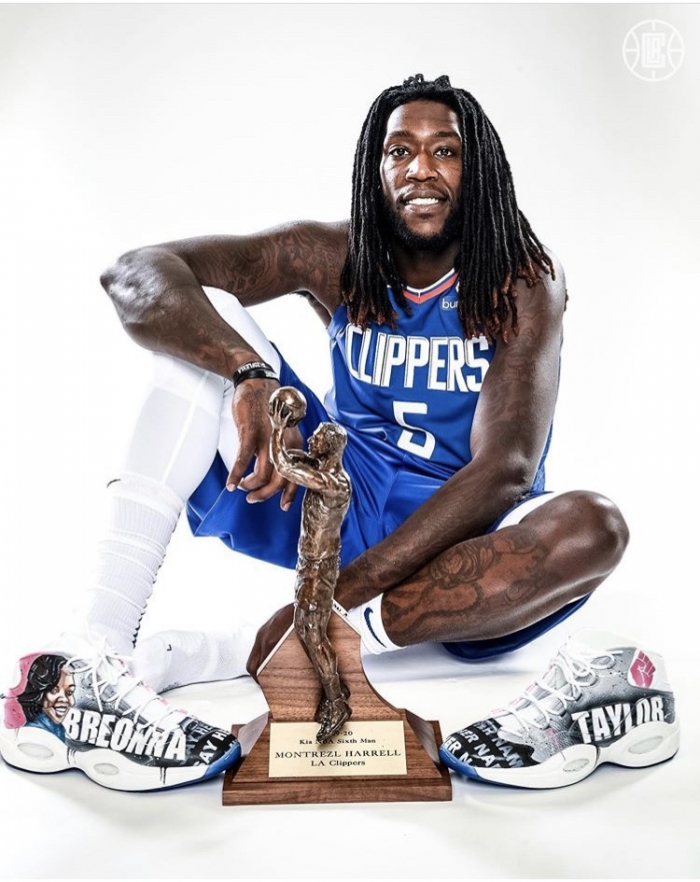 “Kia has proudly served as the league’s official automotive partner for 13 seasons now,” said Kia Motors vice president of service and after-sales operations, Greg Silvestri. “Just as Kia is recognized for excellence in performance on the road, the Kia Performance Awards celebrate the NBA’s top athletes on the court.”

Harrell, who recently lost his grandmother, dedicates the award to her. Harrell left the NBA Bubble to be with her last month before she passed away.

Last year, Harrell was in the running for the Sixth Man Honor. He had a conversation with his grandmother about the honor and she ensured Harrell that 2020 was going to be his year.

In his speech he thanked several of this family members and loved ones, Harrell also thanked his trainer Rico Hines.

“He has a resume that speaks for itself as far as players,” Harrell said. “To be around somebody as special as that and have him put me through these situations and know what it takes to be here, it’s amazing.”

Harrell has been a consistent force coming off the bench for the Clippers, leading the team with 1.1 blocks per game this regular season. He also came in third on the team with 18.6 points per game, 7.1 rebounds per game and 58 percent in field goal shooting.

“I’m here on behalf of one player, Montrezl (Harrell). I’m just so proud of him as a coach,” said Clippers head coach Doc Rivers. “I feel like more than a coach watching Trez do this. I feel like a proud father.”

During his three seasons with the Clippers, Harrell only had 10 starts. During the playoffs this season, Harrell scored 10 points and 3.2 rebounds per game.

A Clippers player has won the Sixth Man honor five times out of the past seven years. During the press interview for the award Harrell wore a shirt that had a picture of Williams, who won the award with the Toronto Raptors in 2015 and with the Clippers for the past two seasons.

He noted that Williams never complained about coming off the bench and that he is grateful to learn from Williams.

“He’s the ideal person that you could model behind, playing the game and doing it the right way,” Harrell said about him. “He just excels and keeps driving it and being the best player in his nature and his role.”