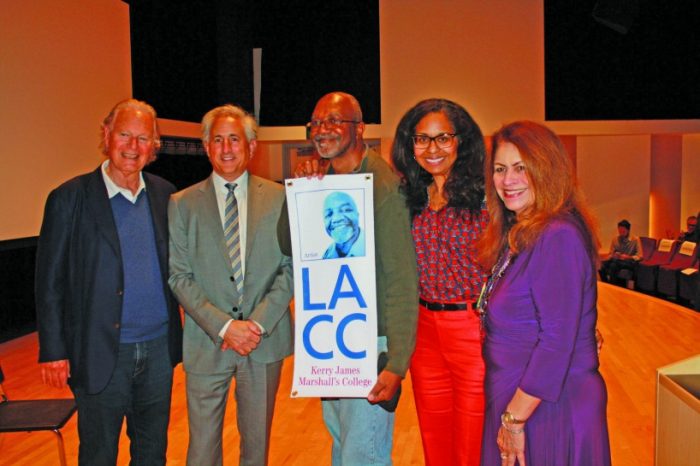 The phrase “Black is beautiful” comes instantly to mind when viewing the body of work by painter Kerry James Marshall.  Colorful depictions of ebony African Americans highlight his art, which is currently featured in an exhibit entitled “Mastry” at the Museum of Contemporary Art in Los Angeles.

The collection of nearly 80 paintings are a 35-year retrospective of his professional work from his “Portrait of the Artist as a Shadow of his Former Self” released in 1980 to his more recent reflections of African American history. Most interesting is that Marshall’s compelling paintings consistently show blacks in everyday scenes going about their business of living.

Marshall’s decision to present positive black images stems from his childhood realization that he wanted to become an artist.  Born in Birmingham, Alabama, his kindergarten teacher shared a scrapbook with him.

“She had all kinds of pictures, greeting cards, pictures from National Geographic’s magazine. Looking at that scrapbook one day is the thing that really changed me. I knew I wanted to make pictures like those,” he recalled. 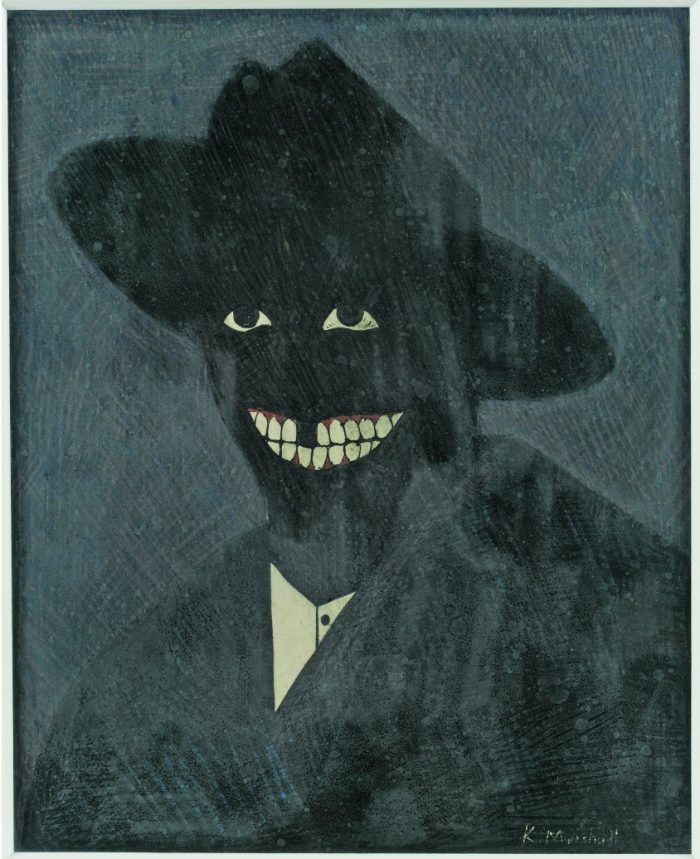 Kerry James Marshall, A Portrait of the Artist as a Shadow of His Former Self, 1980, egg tempera on paper, 8 x 6.5 in., Steven and Deborah Lebowitz, photo by Matthew Fried, © MCA Chicago

When his family later moved to South Los Angeles, he continued to develop his knowledge about art and determined black figures would be the centerpiece of his works.

“We’re all familiar, through the media, with the presence of black people always being associated with something problematic,” said Marshall. “My response to that was to continue to try and normalize the presence of black figures but in every kind of situation that you could think of, doing the ordinary things that people do.”

After high school, Marshall attended Los Angeles City College (LACC) for two years and then fulfilled his dream of enrolling in Otis College of Art and Design.

“I had already decided when I was in grade school that I wanted to go to school at Otis and part of the reason I wanted to go to Otis was because (artist) Charles White was teaching there.  I [became acquainted with] Charles White early on, in about the 3rd or 4th grade, in a book called ‘Great Negroes Past and Present’ that I took out of the library and that’s (the library) where I learned what art was and the whole idea of the meaning of art,” he said. 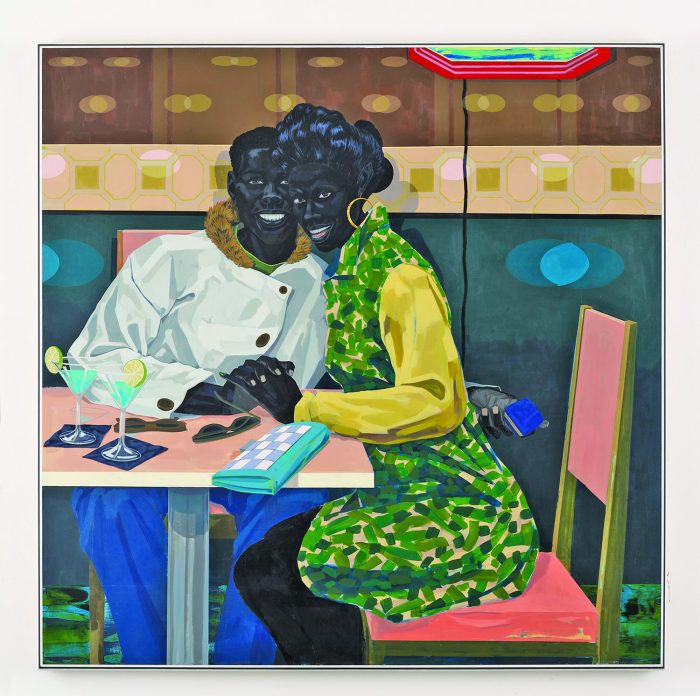 Marshall immersed himself in the art section of his local library, reasoning that it was the one approach where he could learn everything about the field, not just the areas he liked. In his opinion, “That’s an important thing to do is because you have no idea what it is you really need to see or what impact it will have on you later on in your life.  You don’t know that ahead of time.  To only pick out the books that you’re really interested in and go to those things first, that’s a mistake.”

As a professional artist, Marshall’s work has grown tremendously in prominence and popularity.  Over the years, his solo exhibitions have appeared both nationally and internationally including at Museo Nacional Centro de Arte Reina Sofia in Madrid, Spain in 2014, and the National Gallery of Art in Washington, D.C., in 2013.  His work is part of several public collections in museums across the country and his murals and public projects are on display in Chicago, New York, and Philadelphia.

Marshall stopped in Los Angeles March 29 where he delivered a 90-minute lecture about his art at LACC.  In addition to scores of students, the audience included longtime friends, fellow artists and his stepdaughter, Sydney Kamlager, a trustee on the Los Angeles Community College Board. 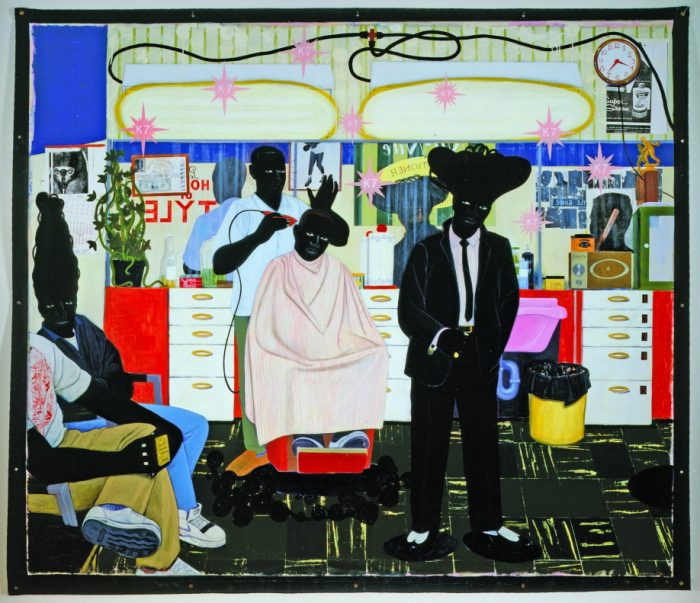 “Kerry’s talk with LACC students was a reminder that Community College can be the starting point for life’s great journeys. I am thrilled that he was able to talk share his experiences and success with students at his alma mater. It was overwhelming to talk to the students afterwards. So many were encouraged by and in awe of our family connection. Those moments always affirm the importance of staying rooted in community,” said Kamlager.

After telling the stories behind his various works projected on the screen, Marshall concluded with a Q&A and words of wisdom to young artists. “The best piece of advice I can give is to start predicting your expectations.  Making art is an intellectual activity.  It’s professional discipline that you have to learn every aspect of if you really mean to do it well.” 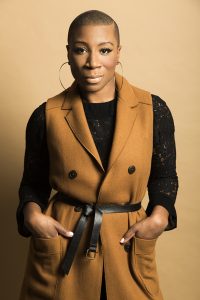 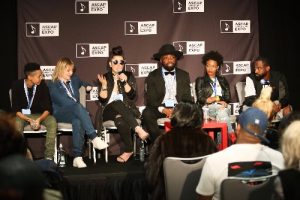 Things Are Heating Up For Kevin Carroll 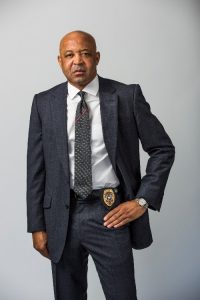 Rod On The Right Side Of The Law 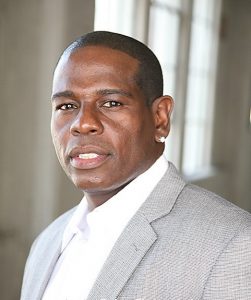 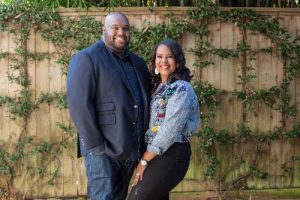