Nine barbershops throughout L.A. County will help welcome the public to free health screenings, including for blood glucose and blood pressure. 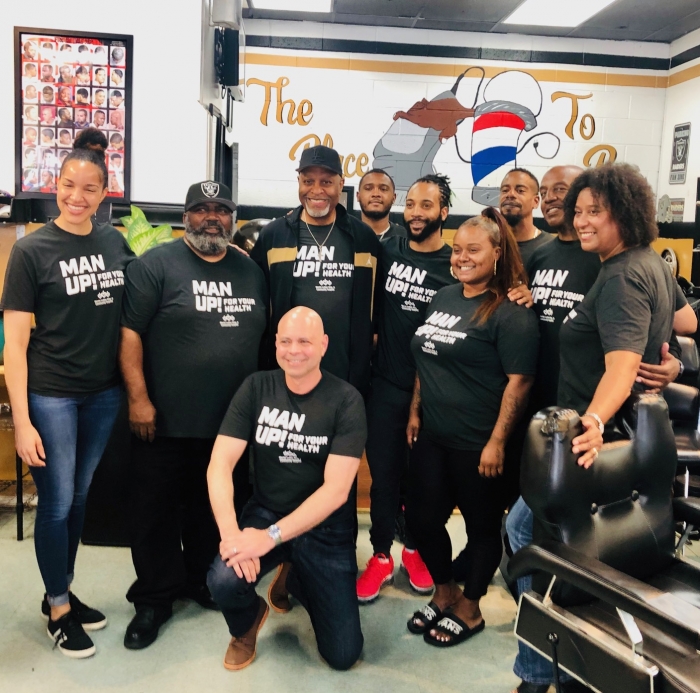 The Place To Be barbershop staff poses with the MLKCH Man Up! Health screening team June 1 in Carson, one of the nine program sites. (Photo courtesy of MLK Community Hospital).

On June 1, health advocates from the Martin Luther King Jr. Community Hospital in Willowbrook, launched their new health initiative Man Up, a program that links barber shops in L.A. County with MLK doctors to offer free medical screenings to the public. The program began at Just Showin’ Off, in L.A., The Place to Be in Carson and VIP Barber Shop in Compton. It will continue at six more barbershops the first Saturday of every month until December 1.

Though the program is geared toward men, all are welcome to get their vitals, including blood pressure, blood glucose and BMI checked, according to Nicole Fredericks, who is a member of MLK’s personnel.

“[If problems are detected] we’ll have you talk to the doctor who will give medical advice. If you have your own doctor, we encourage you to see your own clinician. If not, we give information about MLK’s outpatient clinic and how you can get low or no cost health insurance,” Fredericks explained.

“The whole goal is to make sure people know their numbers and know what to do with them.”

“South L.A. has some of the worst health statistics in the nation,” said Gwendolyn Driscol, MLK director of communications.

“African American men have some of the highest rates of prostate cancer and heart disease and diabetes. Latino men have high rates of obesity compared to other racial/ethnic groups and are three times more likely to be uninsured.”

The Man Up program is a response to those facts, she said. The barbers in the nine shops have been trained to encourage their clients to get screened and to take home health information.

Co-creator of the program, Jorge Reyno said he is surprised at the number of patrons who come to these types of events who have concerning numbers and don’t know it.

“When I get a chance, I talk to them about why it’s important to know, especially for Black men. And, if you don’t have access to resources, we have a lot of resource guides.”

One of the co-founders of the program, MLK’s Community Benefit Coordinator, Lauren Espy said they chose the barbershop because it is a place where a lot of men find their comfort level.

“This creates an environment of trust,” she said.

“So, the difference between our programs and others is that a lot of them are research-based. We are community-based. So, our goal is not so much to collect data but to provide resources and to provide information for these men about their numbers and about how they can get help.”

“In my community, people are afraid of doctors because they have nothing but bad news,” said Darryl Jones of The Place to Be barbers shop in Carson, one of the Man Up’s kickoff sites.

“And then, when you go to a doctor it’s so rushed.  You get 10 minutes to tell you what happened in the last year.  You don’t get a whole lot of time.  If you don’t tell them within that time, the doctor will just tell you to come back in six months. But the patient doesn’t come back because the doc didn’t do anything. The patient still feels the same. So they say: ‘Why go back?’

“That’s what it’s ultimately about: trust. Because if you trust somebody, you’ll do what they say or you’ll trust what they say.  You’ll be more apt to do it because you trust them.  It’s the personal relationship that barbers have with people they’ve been seeing for years and years.  It makes bad news easier to digest.”