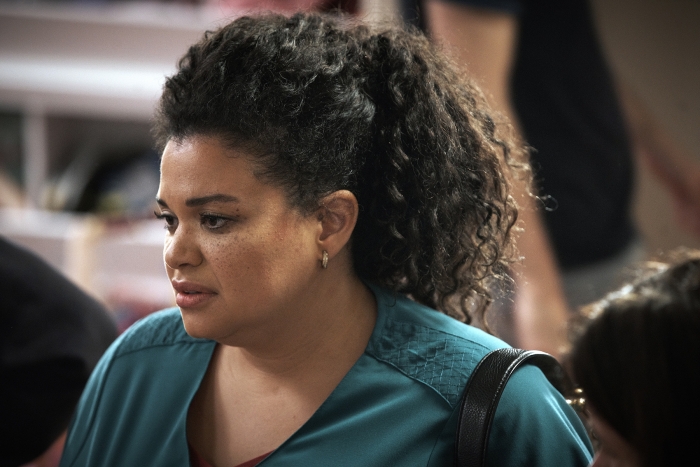 When you read the name Michelle Buteau can you see her face? Well, she’s not a household name, yet, but she will be very soon. Not only is Michelle Buteau beautiful, with charming freckles and lovely wild hair, she’s so talented it makes my brain hurt! Although she is best described as a stand-up, as an actress (Lord, have mercy) there are more layers in her performances than an onion. On the real, I predict she’s going to be remembered as one of our greats in film, television and I think her writing will morph from her stage time in the comedy circles to become something new, bold and wonderful.

So let’s begin the process of falling in love with Michelle Buteau via the new BET series FIRST WIVES. After neglecting their friendship, best friends Bree (Michelle Buteau), Ari (Ryan Michelle Bathe) and Hazel (Jill Scott) reunite to help each other through rough patches in their lives. Together, they navigate music superstar Hazel’s tabloid-ridden divorce, campaign manager Ari’s unsatisfying marriage to her political candidate husband, and orthopedic surgeon Bree’s cheating husband. Tired of always being the ones to make sacrifices in their lives, Ari, Hazel, and Bree vow to prioritize their friendship and have more fun. Along the way, the women learn that as long as they have each other, there’s nothing they can’t do.

The first 30-minutes of the ten-episode series on BET+ can be viewed for free on their website.

An interesting note, Buteau started in comedy a few days after September 11, 2001. Born in New Jersey to a Haitian father and Jamaican mother, her talent quickly caught the attention of industry insiders and in 2017 she was as listed as one of ten comedians to watch by Esquire Magazine. In 2018, Buteau started hosting the Late Night Whenever! podcast which was labeled as “one of the best podcasts of 2018 so far” by Time Magazine. Buteau was also part of “The Comedy Lineup” on Netflix where up and coming comedians have 15-minute stand-up sets. Film producers are getting the “proverbial memo” and Buteau has appeared in the movies: “Someone Great,” “Isn’t It Romantic”, “Sell By”, and “Always Be My Maybe”. She also began hosting the WNYC podcast, Adulting, with co-host Jordan Carlos.

LOS ANGELES SENTINEL: Hello. I’m covering the New York Film Festival and I had to jump into a corner for this interview so, if I’m speaking softly — forgive me.

LAS: Now, I think I’m funny and I know that I am not. Ok. When I saw your work in Netflix’s ‘Someone Great’ I re-wound the scene three times before I completed the movie. I saw something under your wonderfully comedic performance.

MB: She’s just a random bitch on the subway.

LAS: Nope, naw. You Michelle Buteau, you have layers.

MB: Thank you. I think my surrogate was pregnant then and I was really emotional. It was a lot of improv [improvesational] and I think at one point, I asked ‘why he leave you like that’ and I started to cry. The crew started to laugh.

LAS: See, I saw that there was something under that.

LAS: You are quick and funny and beautiful. In First Wives Club your character is wonderfully funny and very complicated despite this being a comedy. How did you get the part and then I want to know what type of stuff you want to do?

MB: (laughing) — Yessss. You have to tell the universe. I was actually in Vancouver filming “Always Be Maybe” when I got the audition for ‘First Wives Club’. Look I loved the movie (‘First Wives Club’). Anything with Goldie Hawn, Diane Keaton and Bette Midler, I was watching it. Those are the comedy sheroes back in the bzz-days along with Whoopi [Goldberg] even Angela Bassett, I’m sorry — she’s funny. I am all into female empowerment and just finding themselves at different times of their lives, interesting. So, I put myself on tape but you know, an actors mind plays tricks on you. You will say stuff like I’m not going to get it, I’m too far away, or they are going to give it to somebody famous. Also, those kinds of thoughts make you fearless too, because you think to fuck it, I’m not going to get it anyway so I might as well have a lot of funny doing this. That’s what I did. I was so surprised that I got the callback and that I was going to do the callback, in New York, with Tracey [Oliver] on Skype. I had just started seeing Tracy’s name everywhere because of “Girl’s Trip” and I thought, this is pretty dope. She’s someone who understands female relationships and she knows how to find the funny in the real.

LAS: That’s true, right. Real-life is so much funnier than half of the stuff I usually see in films and on television.

MB: Exactly. A lot of stories that I have from college and in my ’20s, a lot of people say that they don’t believe them, I’m like ‘it’s true!’ When I saw Tracey on Skype and we looked alike, I was like, ‘–are my cousin?’

LAS: Tracey is beautiful like you? Cool. That’s what’s up. 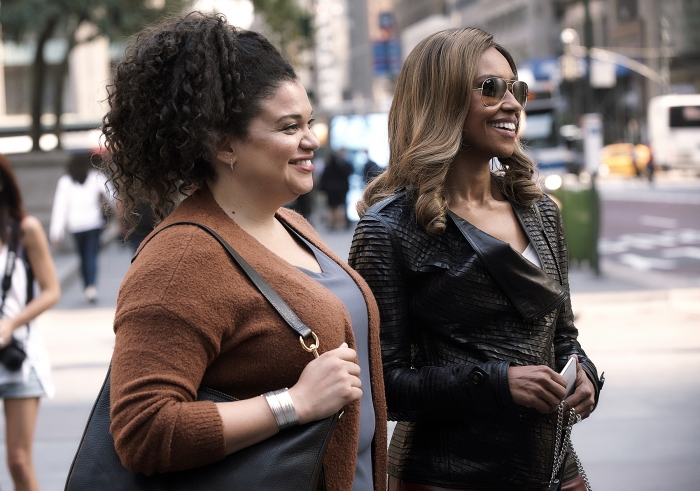 MB: Even on set people confused us. They would be like over here Tracy, I’m like no, it’s me, Michelle.

LAS: So what’s good in your life?

MB: Glad you asked. I now have two, beautiful bouncing twins and my husband and I just bought our dream house. It’s like I want that life. That life like Ally Wong, that JLo, that Mariah Carey, that Angela Basset; that working-mother life where I don’t feel like I’m compromising anything for anybody and I’m just like keeping it moving. I’m doing what I love and not apologizing for it. Bringing my kids on set and exposing them to what you can do when you don’t tell yourself, no.

LAS: I appreciate what you just shared. Did you always know what you wanted?

MB: I told my mother when I was really little that I wanted to act, but she said it, [my dreams], was not a real job. Now, I’m just like, girl, we could have been flying private; this is your fault. Now get in the TSA line. Take your shoes off, your laces too. Unpack your bags, too. We could have been flying, private now you are in the middle seat. Take your biscotti and chill.

LAS: OMG. You are a stand-up comic. You have the gift of timing, damn it. I need a podcast, if people could hear how you just delivered that, golly Michelle Buteau you are the real deal.

MB: Is that funny? I’ve got to write it down. I need jokes, honey.

LAS: My mother (God Bless The Dead) was a twin and her sister, had twins. Here is her advice. Always give your twins things at the same time. It will prevent war.

MB: I really can’t talk about it but I’m scheduled to do a one-hour Netflix comedy special. I’m working on some writing projects that I can’t announce, yet.

LAS: Wow, that’s great news. My writing partner (Art Shrian) and I just entered that screenwriting space. An executive suggested the book Making a Good Script Great and Writing Subtex both by Linda Seger and Story by Robert McKee.

LAS: Hey, do you mind sharing your social media information?

MB: Ok, now we getting intimate. 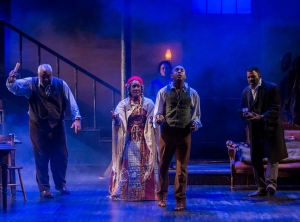 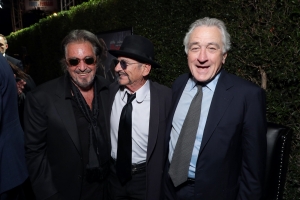 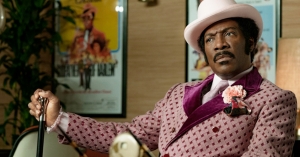