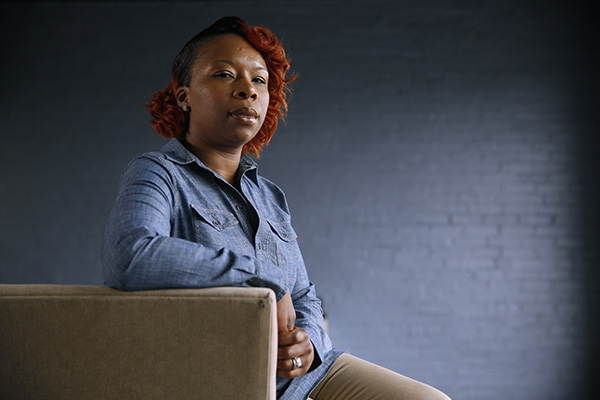 In this photo made Wednesday, April 27, 2016, Lezley McSpadden poses for a portrait in St. Louis. McSpadden was sitting in her car on a smoke break from her grocery store job on Aug. 9, 2014, when a friend told her someone had been shot near Canfield Apartments in Ferguson, Mo. After that her life crumbled learning her son, 18-year-old son Michael Brown, had been shot and killed by a police officer. (AP Photo/Jeff Roberson)

The Missouri governor’s office said Friday it doesn’t have the authority to appoint a special prosecutor reinvestigate the 2014 fatal police shooting of Michael Brown in Ferguson, despite pressure from Brown’s mother to do so.

Lezley McSpadden said earlier in the day that she’d launched an online petition seeking a new investigation into her 18-year-old son’s death, a case that sparked months of protests and helped fuel the Black Lives Matter movement nationally. McSpadden also announced that she planned to run for a seat on the Ferguson City Council in April.

A spokeswoman for Republican Gov. Mike. Parson said his office “has no legal authority to appoint a special prosecutor in any case.” In Missouri, judges can appoint special prosecutors, often at the request of prosecutors who seek to avoid conflicts of interest.

McSpadden has been an activist since her son’s death but has never held public office. On Friday, she said had been surrounded by people who provided her with support and motivation, and they “knew what happened was wrong and didn’t give up the fight.”

“I learned to walk again,” she said. “And this is one of my first steps: running for Ferguson City Council.”

Her son was unarmed when he was fatally shot during a confrontation with Ferguson officer Darren Wilson, who is white, on Aug. 9, 2014. Witnesses initially said the black teenager had his hands up in surrender at the time of the shooting, though an investigation by the U.S. Department of Justice didn’t find those accounts credible.

Wilson, who resigned from the Ferguson police force that November, was later cleared of wrongdoing by a St. Louis County grand jury and the U.S. Justice Department.

Bell, who faces no Republican challengers in November, ran on a progressive platform that included holding police more accountable. On Friday, it was unclear if Bell would consider reopening the investigation himself. Text and phone messages left with Bell were not returned.

McSpadden’s petition says Bell’s win “is a clear mandate from the people of St. Louis to reform the criminal justice system, which first begins with securing justice for my son.”

McCulloch, first elected in 1992, drew considerable criticism for not charging Wilson himself and relying on a grand jury to consider the case. He was also accused of guiding the grand jury to its decision, a charge he has strongly denied.

Calls to reopen the Brown investigation also came Friday from Justin Hansford, the executive director of the Thurgood Marshall Civil Rights Center. He wrote in an op-ed in a Washington Post that Bell’s win over McCulloch “is a sign of hope and change” and that Bell should reopen the case when he becomes prosecutor.