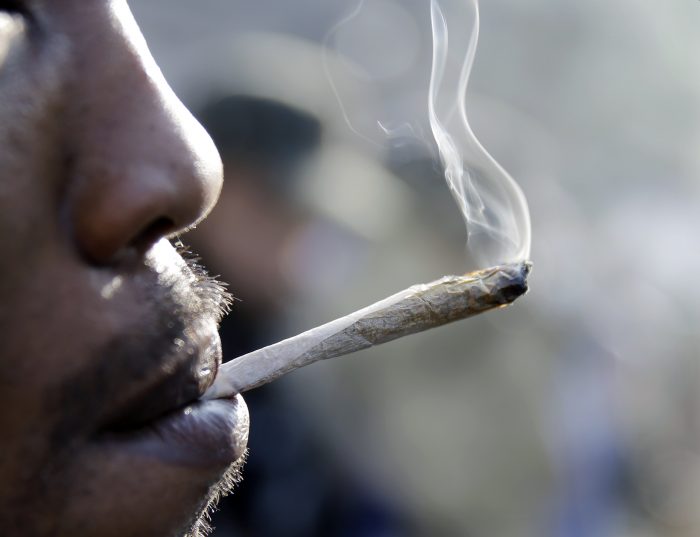 A man smokes a marijuana cigarette as a large group gathered near the New Jersey Statehouse to show their support for legalizing marijuana Saturday, March 21, 2015, in Trenton, N.J. The event drew a diverse crowd of roughly 200 people. Many said they wanted to show their support for legalizing or decriminalizing pot, while others said it should only be given to people with medical conditions that could be eased by the drug. Several people were openly smoking the drug during Saturday’s rally, but apparently none were arrested. (AP Photo/Mel Evans)

California Gov. Gavin Newsom signed Senate Bill 793 into law on Aug. 28. The legislation is one of the country’s strongest restrictions on flavored tobacco.

The bill makes it a crime for any retailer or individual to sell a flavored tobacco product or any tobacco product flavor enhancer in the state. Violation will be punishable by a fine of $250 for each infraction. The law goes into effect Jan. 1, 2021.

“I have been expressive in terms of my absolute condemnation of this tobacco industry that continues to find ways to target our youth,” Newsom said before signing the bill. “And it will be a point of deep pride and personal privilege — as a father of four and as someone who’s had many, many family members die at the hands of the tobacco industry — to sign that bill. I can’t be more explicit. I can’t wait until it becomes law in the state of California.”

SB 793 breaks “Big Tobacco’s death grip,” on longtime users hooked on nicotine, said Sen. Jerry Hill (D-San Mateo), who is the author of the bill. He said that the addition of fruit and other alluring flavors to the products are tactics tobacco manufacturers are using to entice a new generation of smokers — the youth.

“The action by Gov. Newsom and by the California Legislature this week is a huge win for our kids and the health of our communities,” Hill said in a written statement. “SB 793 will save lives.”

Assemblywoman Shirley Weber (D-San Diego), chair of the California Legislative Black Caucus (CLBC), agrees with proponents of the bill and condemns notions that menthol-flavored cigarettes are strictly associated with the Black community.

“I too rise in support of SB 793. I am insulted that the tobacco industry would make an effort to have us believe that mentholated cigarettes are a part of Black culture,” she said. “Someone wants to save us and our children and finally focus on African Americans.”

Some individuals and organizations opposed to the bill say they are concerned about the bill’s narrow focus. While menthol cigarettes are included in the ban, shisha tobacco — used in hookah water pipes, premium tobacco, and loose-leaf tobacco — is exempted.

The Law Enforcement Action Partnership (LEAP) and the National Organization of Black Law Enforcement (NOBLE) say the bill is discriminatory because merchants will continue to sell some other adult tobacco products that are not popular among African Americans and other minorities.

In addition, other opponents of SB 793 say the new law could possibly start a new wave of illegal activities, such as the underground sales of the banned products out of “backpacks or the trunk of a car,” said representatives of Consumer Advocates for Smoke-Free Alternative Association (CASAA).

“While activists are claiming victory, California residents already know that the foundation of an informal nicotine market is already in place,” CASAA said in a written statement after Newsom signed the bill. “It is not beyond the realm of possibilities that young people, those whom this legislation is supposed to protect, will now have more access to products intended for people who smoke.”