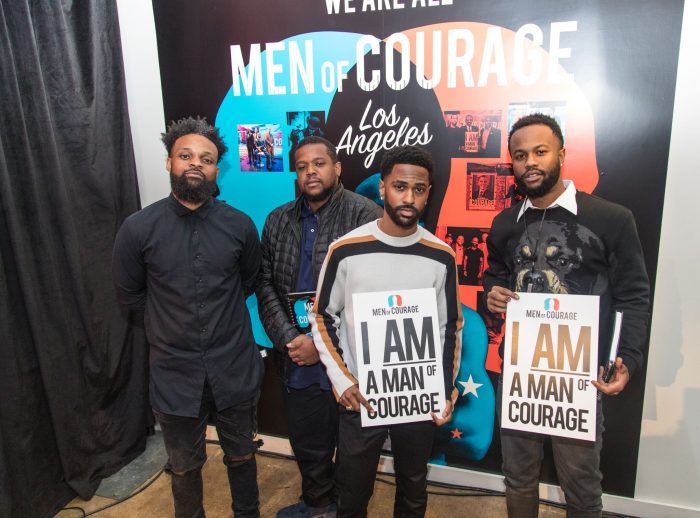 Held at a swanky venue in Downtown Los Angeles, the testosterone-driven event placed specific focus on building socioeconomic wellness and education in communities of color and among Black men. In attendance were also a slew of professional athletes, business owners and forward thinking men of color who came with a ready mind to affect change in their communities. 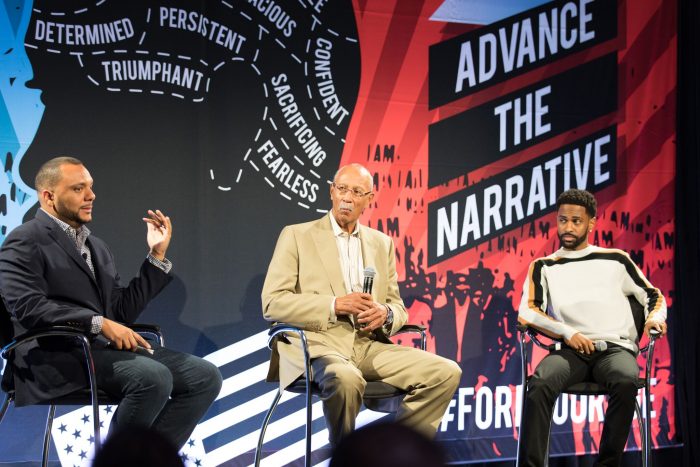 Black men in America are often showcased in a negative light as absent fathers, hoodlums or men without purpose. This event, however, brought attention to the fact that Black men in America, no matter what stage they are in life, have the capacity to be great and not conform to the standards society sets for them.

We asked Big Sean how he defines a man of courage, and he simply stated that it is someone who thinks about more than just himself. “It’s somebody who steps up and considers the whole surroundings, the whole neighborhood, the whole community and bosses up and delivers on it,” he said. “That’s the way we can really go forward and advance everything we’re doing,” Sean continued.

Big Sean humbly accepted that there are young boys and men who look up to him and his artistry, but said that it’s them who he admires for their will to keep going in spite of … “If they look up to me, just know I look up to them, because I respect them for respecting themselves and the potential they have,” Big Sean said. “As long as they take the time out to nurture themselves and really figure out what’s going on, that’s the true key to success,” he added.

Typically, the event is left exclusively for men to identify and solve core community issues, but the fellas gave just a few ladies a pass this time, calling on them to complete their asset mapping exercise. Each table was set with a toolkit, so that in an exclusive setting, the men could brainstorm and create actionable solutions for change, some of which include combining resources to create change and positive influence for the Black men and boys who need it the most.

Trakmatik, music connoisseur and founder of a non-profit organization called Be Yourself, is also a man of courage who’s on the field doing the work and teaching youth about their worth. “It was more than music, it was mentoring and giving back to the community.” Trakmatik stated. “Men my age, they always talk about trying to make a change in the community but don’t actually do anything. So I’ve been in the streets, teaching kids for about 7 years now, so a day like this means a lot to me,” he continued. 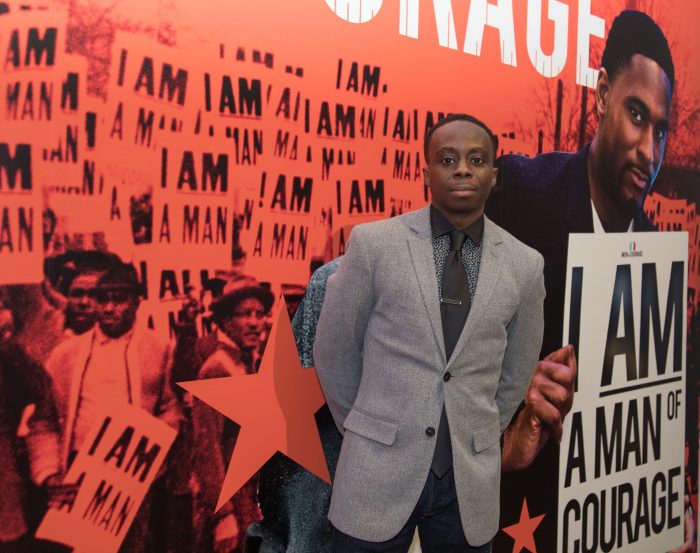 The Griot founder Barion Grant stands in his truth as a man of courage. (Photo by Louis Kengi Carr)

Bettis says that being a man of courage means that he’s able to “leave a legacy for the young men that come after” him.  “I’m able to walk this path because of the legacy that’s been left in front of me,” he said. “Speaking of Dr. Martin Luther King Jr., to have an opportunity to have an event like this on his birthday, it really symbolizes the next step and we need to pay it forward.” Bettis declared.  Bettis also has his own foundation called the The Bus Stops Here Foundation where he says their goal to provide underprivileged youth with a hand up.

When asked how more athletes and men of color can get involved, just as Colin Kaepernick has taken a stance for change, former Detroit Mayor and NBA Hall of Famer Dave Bing said it will happen simply by promoting the men who are great fathers, great husbands and great business people. “We just want to as much as we can promote that,” he said. Bing also said the truth needs to be told to young people whose eyes are solely focused on becoming professional athletes.

“I think the truth needs to be told to them. It’s probably one-tenth of one percent of young Black men that can make it into professional sports, so it’s very tough, it’s very difficult,” he said. “You not only have to be good, but the timing is really important,” Bing continued.

“Trying to get athletes up to date to look back where they came from, and they’re at the height of their careers; we want them to give back, and we want them to sit down and talk to these young people, and let them know what we expect of them and what they can achieve,” Bing stated. “They don’t necessarily have to play professional sports, but they still can be very successful at life.” 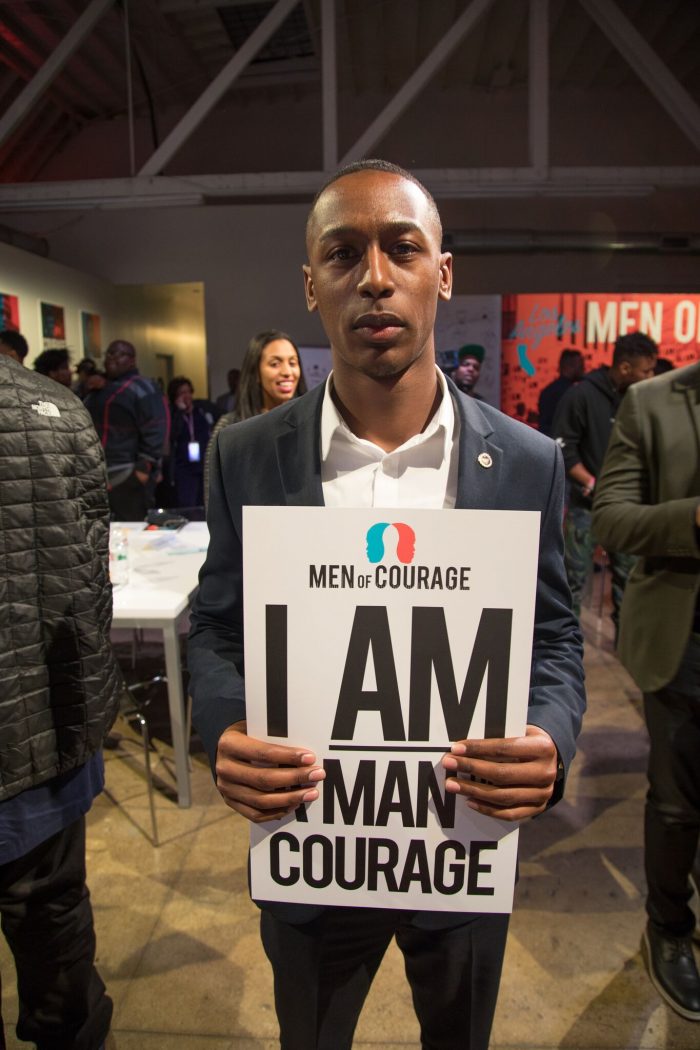 A man of valor and purpose carries his truth at Men of Courage launch in Los Angeles. (Photo by Louis Kengi Carr)

On the economic front, entrepreneur, philanthropist and Buffalo Wild Wings Franchisee owner, Karim Webb says that we must first address the education crisis among Black boys. Based on data collected from the California Community Foundation and his work in South L,A, Webb says “40% of African American boys in California don’t graduate high school, and 90% of the ones that don’t end up going to prison.”

“What we know is that what fixes that issue is love,” Webb stated. “Until they’re surrounded with the consistent love that says, ‘hey Black boy, regardless of what society says about you, what you see on TV, you have value, and you have the God-given right to create what you want to create for yourself and for your life.’ Once we get that, then we can start holding them accountable,” Webb declared.

So, whenever there is an opportunity to celebrate men of color doing positive things, we should not only jump at the opportunity, but also participate in the process. As a tangible means for every Black men and boy to get involved, the Men of Courage program created a toolkit designed to spark conversation, change perceptions and create solutions. You can download your own copy of the free toolkit by visiting https://menofcourage.com/. For exclusive interviews from the evening, visit www.lasentinel.net.