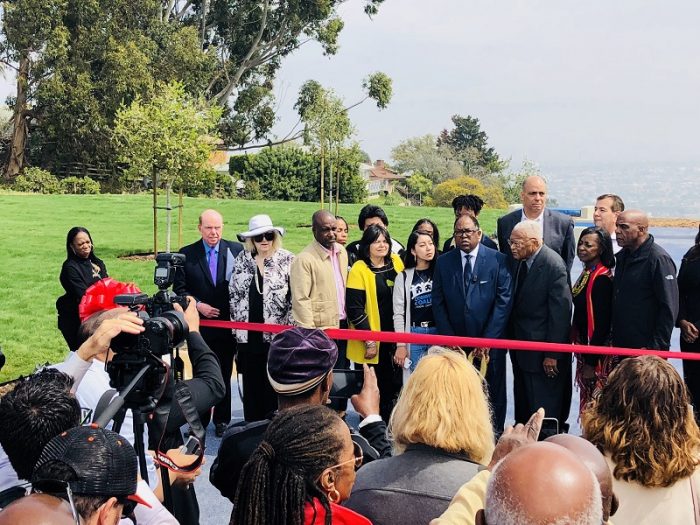 Saturday at 10 a.m., hundreds of people walked to the top of Kenneth Hahn waving flags as they proceeded to the dedication ceremony and culmination of the season for nonviolence program. The sun shined bright as guests were led by SHINE Mawusi Women’s African Drum Circle and NOW Art LA Flag Troupe. Men, women, and kids had smiles on their faces as they proudly marched to the ceremony. Supervisor Mark Ridley-Thomas served as Master of Ceremonies during the entire program. The celebration kicked off with a musical selection from The World Stage with Executive Director, Dwight Trible as they gave a very special performance of “Lift Every Voice and Sing.” The crowd was given the lyrics to sing along with the band’s harmonious tune.

Board Chair of the Baldwin Hills Conservancy, Jacqueline Dupont-Walker, William W. Funderburk, Jr, who is Vice President of the Los Angeles Department of Water and Power Board of Commissioners, President of Mujeres De la Tierra, Irma Munoz, who worked to build the grove, and Marqueece Harris-Dawson, Councilmember of the city of Los Angeles, District 8 all gave their remarks about MLK and the Tree Grove celebration as well as some personal reflection.

The talented choir First New Christian Fellowship sang “Take My Hand, Precious Lord” having the whole crowd in awe with their angelic voices.

Once the choir finished, keynote speaker Reverend James Lawson, Jr., who was with King the day of his death, came to the stage. It was the day before Easter and the audience received a few inspirational words from the minister. Lawson played an integral part in the 1961 Freedom Riders as well as having served as chairman of the strike committee for the Memphis Sanitation Strike. He has mentored many leaders of the Civil Rights Movement and has worked tirelessly to provoke change for BLACK people.

Attendees were then lead by the Xipe Totec Aztec Dancers in closing prayer a few steps away from the ribbon cutting of the Tree Grove.

The 15,000 square feet grove is engraved with MLK’s picture and inspirational words from King himself. There is a picturesque view of downtown Los Angeles from the Tree Grove, which could be a beautiful place to meditate and reflect.

Once the ribbon was cut and the cheers subsided, everyone walked their way back to enjoy refreshments such as sandwiches, cookies, fresh fruit, water and juice. Staff and guests mingled as they ate until about 1 p.m.

Ridley-Thomas traveled this past Tuesday April, 3rd to Memphis, Tennessee where he participated in activities honoring the life and legacy of Dr. Martin Luther King, Jr. to continue his commemorating of King’s assassination. Ridley-Thomas once served as president of the Los Angeles chapter of the Southern Christian Leadership Conference.

For information on the Baldwin Hills Conservancy visit, http://bhc.ca.gov.

More information on The World Stage can be found at http://www.theworldstage.org.

For information on the Xipe Totec Aztec Dancers visit, http://www.xipetotec.org/about.html.