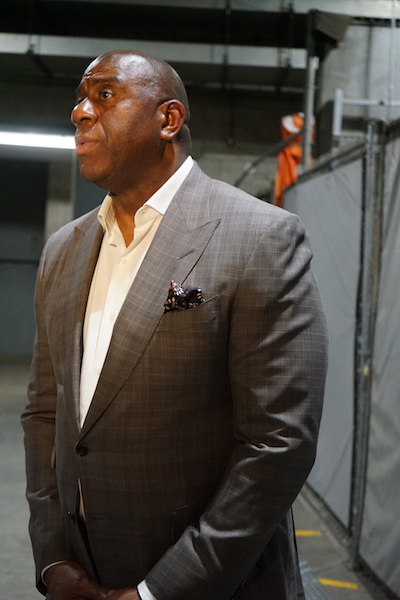 The Lakers season has been filled with monumental moments which started with the announcement that LeBron James would be joining the Los Angeles Lakers for the 2018-2019 season. What was heralded to be the combination that would turn the Lakers around in James, Magic Johnson and Rob Pelinka, soon became evident that the best laid plans can go awry.

As the Lakers faced the end of their season and their sixth straight failure to obtain a playoff spot, another startling announcement was made moments before that game was to commence. Shortly after Luke Walton’s last routine pregame press conference for the season on Tuesday, Johnson called for an impromptu press conference where it was assumed that many things would happen. Shockingly, what did happen was his announcement that he was stepping down from his role as president of basketball operations for the Lakers.

Johnson told the L.A. Sentinel that he began grappling with stepping down on the plane coming back to Los Angeles from a speaking engagement in Phoenix on Monday. When he woke up on Tuesday morning, he prayed about stepping down and made up his mind. He said he had not told Buss, the Lakers’ controlling owner. Though a myriad of reasons were speculated as to why he did not alert his boss, he stated it was for fear that she would try to convince him to stay in the position.

“Somebody is going to have to tell my boss, because I know she’s going to be sick,” Johnson said. “I couldn’t stand to tell her. You know I love her as a sister. Her and I have such an amazing relationship and she gave me full power to do what I wanted to do.”

In recent weeks, multiple reports were released alluding to growing tensions between the front office with Buss at the helm and Johnson over differing philosophies on whether to keep Lakers head coach, Luke Walton moving forward. Johnson confirmed he was given the go ahead to fire Walton if he chose to do so. He stated that he also did not inform general manager, Rob Pelinka, of his decision before the unscheduled press conference.

Buss did not attend the Lakers final game of the season, but following the announcement she tweeted: “Earvin, I loved working side-by-side with you. You’ve brought us a long way. We will continue the journey. We love you.”

Johnson said he became increasingly frustrated by reports of a splintered relationship with Buss and refuted claims of them being on different pages. He was tired of the “backstabbing and whispering” that was going on around the league.

During Johnson’s tenure, he experienced criticism for many of his moves as president of basketball operations. ESPN’s Adrian Wojnarowski reported that Johnson “never fully committed” to his Lakers front office position citing that he was allegedly often away from the team and had limited office hours.

“I was into it because I wanted to win,” Johnson told the Sentinel when asked if he gave the job 100 percent. “I wanted to be successful. We were heading down that path when the injuries hurt us.”

The manner in which the announcement was made exemplifies the way that the Lakers season unfolded from the trade talks related to Anthony Davis, to who leaked that information, to the fall out of the locker room following the NBA trade deadline and the various injuries. It called into question what is necessary by not only players, but a management team that can come together with a single vision of what the future of the Lakers looks like.

“The difficulty for me was more, I couldn’t be me,” Johnson added.

The Lakers and Johnson were fined $550,000 for tampering over Paul George and Giannis Antetokounmpo according to ESPN.  Earlier this season, the NBA conducted another investigation to determine if Johnson tampered with Philadelphia 76ers’ Ben Simmons, who asked if he could workout with Johnson in the offseason to improve his game. Johnson was ultimately cleared in that case as the NBA ruled there was no tampering.

“I was thinking about all those times, all those guys who want me to mentor them or be a part of their lives, and I can’t even do that,” Johnson remarked. “I had more fun on the other side.” 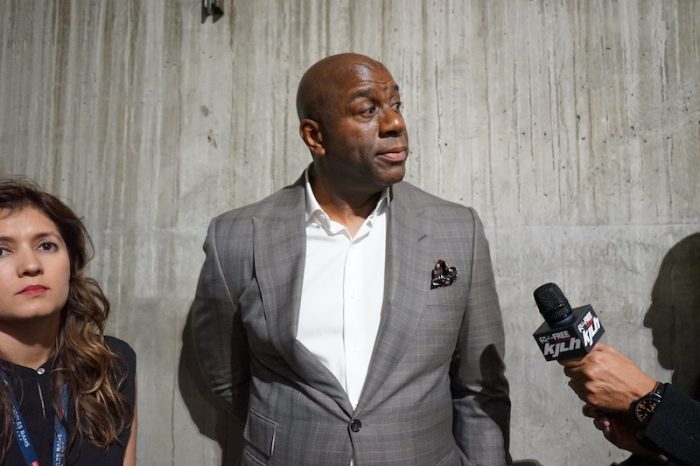 The Lakers issued a statement on Johnson’s unexpected resignation:

“There is no greater Los Angeles Laker than Earvin Johnson. We are deeply grateful to Magic for all that he has done for our franchise – as a player, an ambassador and an executive.

“We thank him for his work these past two years as our president of basketball operations and wish him, Cookie, Andre, EJ and Elisa all the best with their next steps. He will always be, not only a Lakers icon, but our family.

“As we begin the process of moving forward, we will work in a measured and methodical fashion to make the right moves for the future of our organization.”

In February 2017, Johnson was hired as the new Lakers president of basketball operations. He claimed he would resign if the team did not find success within two years of him in the role.

Then the Lakers signed LeBron James in the offseason to a four-year deal. The team was off to a great start with James as the team’s leader. With a 20-14 record, Los Angeles was in fourth place in the Western Conference after beating Golden State on Christmas Day. That was the same game that James suffered a strained groin injury that caused him to miss 18 games. The team never recovered and failed to make the playoffs for a franchise-record sixth straight season, including the three seasons since Johnson and Pelinka took over.

The Lakers season ended Tuesday in a loss against the Portland Trail Blazers. Looking ahead, the Lakers will have to replace Johnson and shift their focus towards the upcoming NBA Draft along with one of the biggest free agency frenzies in recent history.

As for Johnson, he said with his signature smile that he will return to running his businesses full time. For the first time since Johnson and Pelinka held their introductory press conference announcing James as the newest addition to the Lakers, Johnson looked free and relieved.

“I was happier when I wasn’t president [of the Lakers],” Johnson said. “…I want to go back to having fun and go back to being who I was before taking on this job.” 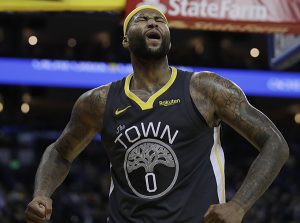 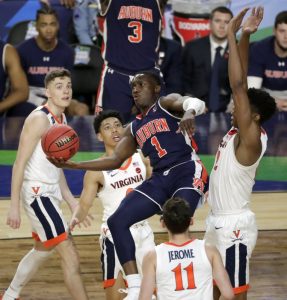 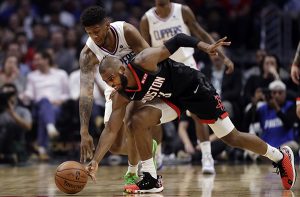