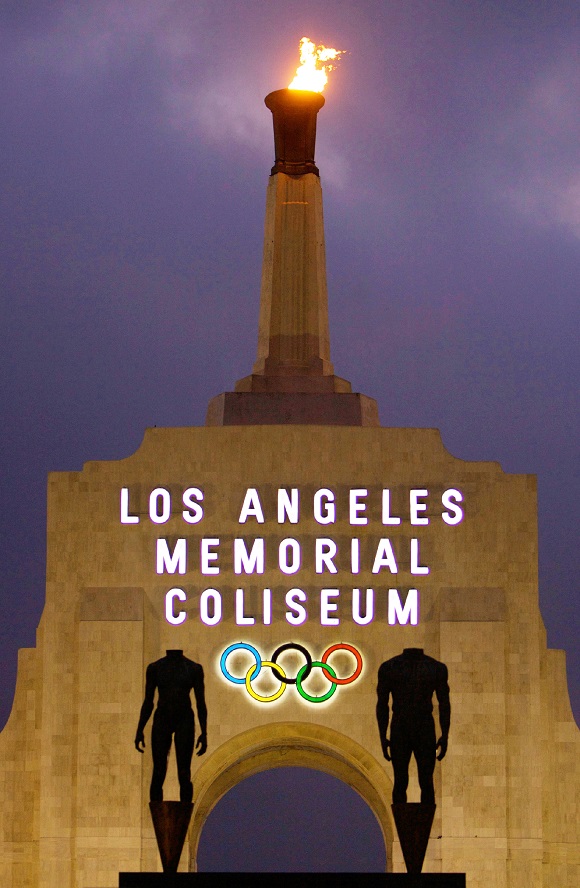 In this Feb. 13, 2008, file photo is the facade of Los Angeles Memorial Coliseum in Los Angeles. The Los Angeles City Council is expected Friday, Aug. 11, 2017, to endorse a proposal to host the 2028 Olympics, following an announcement of a deal last month to leave 2024 to Paris. (AP Photo/Damian Dovarganes, File)

Los Angeles was officially named last Wednesday as host of the 2028 Summer Olympics by a unanimous vote of the International Olympic Committee in Lima, Peru.

Following the IOC’s vote, Los Angeles Mayor Eric Garcetti signed the host city contract, sealing the deal for L.A. to host its third Olympics, after stints in 1932 and 1984.

The successful bid comes an unprecedented 11 years before the actual Olympics are to take place. Paris, which was awarded the 2024 Games, will also be hosting for the third time. The two cities were initially in competition just for 2024.

“This is a momentous day for the people of Los Angeles and the United States. For the first time in a generation, we are bringing the Games back to the City of Angels,” Garcetti said. “L.A. loves the Olympics because the Games have lifted up our city twice before. But to us, the Games have always represented an even brighter future and the chance to harness the power of sport and the Olympic Movement again to inspire the next generation — for the next 11 years and beyond.”

After the IOC announced over the summer its desire to award both the `24 and `28 Games simultaneously, Garcetti and other leaders reached a tentative agreement in July to host in `28, pending the official approval of the IOC in Lima, making Wednesday’s vote just a formality. IOC President Thomas Bach was already scheduled to light the Olympic caldron at the Los Angeles Memorial Coliseum on Sunday.

Host cities are typically named seven years in advance, and L.A. was able to garner numerous financial concessions out of the IOC by agreeing to wait the extra four years.

Under the terms of the 2028 host city contract, the IOC promised to immediately advance $180 million to the Los Angeles organizing committee due to the longer planning period and to fund youth sports in the years leading up to the Games.

“This 11-year agreement with the IOC is the ultimate validation of LA 2028’s new games for a new era, and Los Angeles’ vision for the future,” LA 2028 Chairman Casey Wasserman said.

“As a team and as a city, we could not be more excited to be entering into this long-term partnership with the Olympic and Paralympic movements, and with one of the great cities of the world, Paris,” he said. “This will be an extraordinary collaboration that secures the future of the movement for generations. Now LA 2028 has a golden opportunity, with four more years to prepare and a $2 billion contribution from the IOC, to redefine how hosting the Games can benefit host communities.”

The city’s quest to host its third Olympics has been filled with plenty of twists and turns. L.A. initially competed along with Boston, San Francisco and Washington, D.C., to be the United States’ official bid city for the `24 Games before losing out to Boston in 2015. But later in the year, Boston dropped out due to growing local opposition and Los Angeles jumped in.

The city entered the contest for `24 along with Paris, Hamburg, Rome and Budapest. But one by one, cities dropped out, leaving only Paris and L.A.

Over the summer, the IOC announced its desire to award both the `24 and `28 Games at the same time, if Los Angeles and Paris agreed. The decision was influenced by the soaring cost of hosting the Olympics and the fact that fewer cities have seemed willing to assume the financial risk.

With both Los Angeles and Paris submitting bids widely seen as fiscally responsible, the IOC decided to lock them both in to hosting duties. After initial reports indicated that Paris was the favorite to host in `24, L.A. leaders indicated they were willing to host in `28.

LA 2028, the renamed committee leading the city’s bid, had proposed a balanced budget of $5.3 billion for `24 by utilizing existing venues and not building any new permanent structures just for the Games. Although an independent analysis of a budget for 2028 will not likely be completed for months, it is not expected to vary drastically in cost or approach. The L.A. City Council approved the switch to `28 in August despite not having a complete picture of the financial aspects of the decision.

Another unknown at the time of the vote was whether the California Legislature would approve $250 million to help cover any potential cost overruns. State lawmakers had made the pledge for 2024, but after the switch to `28 a new bill needed to be drafted. AB 132, which promises $270 million, is currently making its way through the Legislature.

Under the `24 plan, the city would have covered the first $250 million in cost overruns, the state the next $250 million and the city anything after that. The $5.3 billion balanced budget for `24 included no money to be spent from the city’s general fund as organizers believe they can cover all costs from corporate sponsorships, ticket sales, broadcast rights and the IOC’s contribution.

The Coliseum and the new NFL stadium in Inglewood are set to share duties for the opening and closing ceremonies, part of a “something old and something new” approach, as the Coliseum was the site of the ceremonies both in 1932 and 1984. Other venues in the city and nearby like Staples Center and the Rose Bowl are also planed as sites for events, and the dorms at UCLA are set to be the site of the Olympic Village.

Rep. Jimmy Gomez, D-Los Angeles, also announced that he and Rep. Steve Knight, R-Palmdale, introduced a bipartisan resolution in the House of Representatives in support of bringing the Olympics back to Los Angeles in 2028.

“Los Angeles is the perfect city to host the Games. Its rich cultural diversity and sportsmanship best exemplifies the Olympic spirit,” Gomez said. “Growing up in nearby Riverside, I remember the thrill of the competition and the athletes who inspired us in the 1984 Olympics in Los Angeles, from Mary Lou Retton to Carl Lewis. I look forward to seeing what this excitement will do for our city, and the region, as we prepare for 2028.”