The mayor of Los Angeles City Mayor Eric Garcetti provided an update on the wellbeing of the city since the COVID-19 outbreak. Los Angeles has seen little to no spikes dating back to July, the mayor encourages that every resident work together in preventing community transmission. Garcetti also shared there are waves of sanitation and health protocol upon businesses not opening.

The mayor touched on major points that are crucial to the growth of the city. According to Los Angeles over 10,000 students have been resubmerged in a school setting, with aligned protocols in place. The mayor emphasized the only to slow down the spread of the virus is by universally accepting and practicing social distancing guidelines.

Garcetti stated, “Our actions could either save lives, or take lives. Our sacrifices will be the difference between death and survival for the people we love the most.” The mayor explained that the progress into recovery are in the small daily steps from everyone in the community. 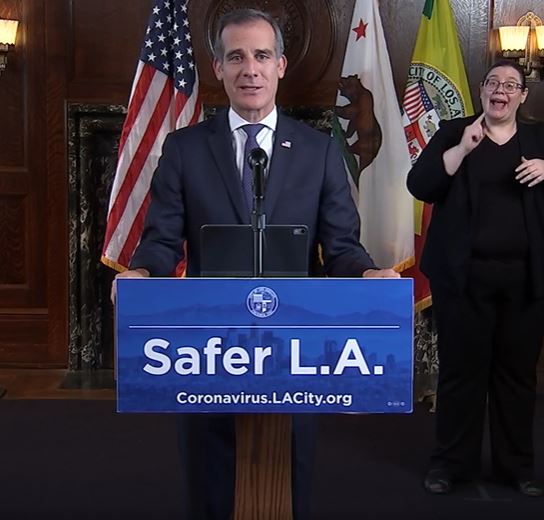 The commitment must stem from the citizens to public officials. In Previous statement about contactless government operations, Garcetti stated, “COVID-19 has radically changed the way businesses, customers, and communities’ function, work, and live –– and government is no exception. We have to find new, innovative ways to engage with our constituents, boost accessibility and convenience, and protect everyone’s health and safety,”

The mayor continued “No one should have to wait in line or a crowded building when they could just click a button, and today’s Executive Directive puts back-to-basics services at Angelenos’ fingertips.” This statement is referencing the Mayor’s Contactless Government Executive Directive. According to the mayor’s office, it has converted critical services to available online. There is a goal to limit face-to-face interaction and directive requires all departments to develop a cohesive plan to make contactless services the norm for the long term.

The mayor reported that we are a reduced case-load environment.  According to Garcetti, the County now estimates the rate of transmission is 1.05. which means one other person contracts the virus when in contact. Mayor Garcetti stressed that the number indicates Los Angeles is headed in the wrong direction. Garcetti discussed new cases that were found in the city, 548 new positive cases were reported.

With certain sectors opening, there has been higher demand for testing. 65,000 tests were administered in the city of Los Angeles, currently there has been a surge to about 80,000 tests a week. Following the increased demand for tests, the positivity has also seen an increase. Garcetti stated, “Any trend in the wrong direction, is a trend, in the wrong direction,” the mayor continued, “We’ve seen how these small trip wires can lead to large outbreaks.”

Hospitalization has been stable, with PPE equipment and safety measures in place. Last Friday the state updated their measurements to allow private gatherings. This is trickling down to local public office, in order to be aligned with the state’s health orders.

Garcetti shared that the key to restoration rests internally, people within the community. The mayor stressed the importance of every Angeleno. Garcetti stated, “Together we are powerful, powerful to save.”  The Mayor was looking for ways that to get ahead on holiday season, Halloween generally has a lot of physical contact, he shared that even a slight deviation from the plan can lead to massive regression.

As the virus grows, so do the approach to stop it. The new way of celebration is limiting but it’s for the betterment and progression of the city. The community has to think as a whole and take in the accountability for everyone. Although public officials prepare for a surge in transmission due to Halloween celebration, the mayor mentioned, the next point on this plot will be up to the citizens checking for one another and socially distanced, but united in spirit. 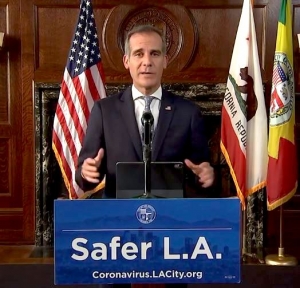 Garcetti Says Trick-or-Treating Discouraged This Year But Not Banned