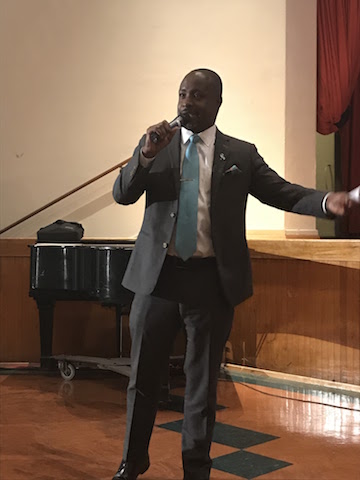 Councilmember Marqueece Harris-Dawson addresses residents at the Los Angeles Board of Police Commissioners town hall focusing on the need to build trust between LAPD and residents. (courtesy photo)

A collective of South Los Angeles-based organizations successfully urged the Los Angeles Board of Police Commissioners to hold, for the first time, several of its official meetings directly in the areas they serve.

“This historic first meeting is a crucial opportunity for the residents of South LA to have their voices and concerns directly heard around public safety issues in their neighborhood,” said Alberto Retana, president & CEO, Community Coalition.

Participants “ strongly urged the Board to put in place comprehensive public safety strategies that improve relationships between the police and communities of color,” said April Verrett, executive vice president of SEIU Local 2015.

“Securing this meeting is a long sought after step to increase transparency and community engagement between the Commissioners and the people whose lives are affected profoundly by their regulations and policies,” said Melina Abdullah, founder, Black Lives Matter Los Angeles.

This year marks the 25th anniversary of the 1992 Los Angeles Uprising. In April, Community Coalition engaged over 2,000 residents in a “Re-Imagine Justice” art exhibit and weekly panel series. In addition, the organization collected over 4,200 polls from South Los Angeles residents to gain a deeper understanding of the issues impacting their quality of life. The poll findings and community dialogues confirm that to date, there have been no major improvements to address police misconduct, accountability and transparency.

“It is unacceptable that there have not been significant changes that advance communities in South LA around issues such as access to police misconduct investigation findings,” said Pete White, executive director, Los Angeles Community Action Network. “We will weigh in on the concerns that impact our daily lives and hold the Board accountable to implement community-driven public safety strategies.”

Additional issues community stakeholders plan to raise include de-escalation training on tense situations, the adoption of alternative public safety strategies that improve community and police relations, how the police can divert youth and people with mental illness and/or developmental disabilities into treatment programs instead of incarceration, and that the LAPD officer disciplinary board should reflect the communities that are most impacted by police misconduct, among others.

“In this City and in this community especially, we know that building trust is hard work it starts with transparency and communication. Tonight’s meeting is a big down payment in a long process to build that trust. There’s no way we can build trust and there is no way we maintain trust if we can’t at least talk to each other.”