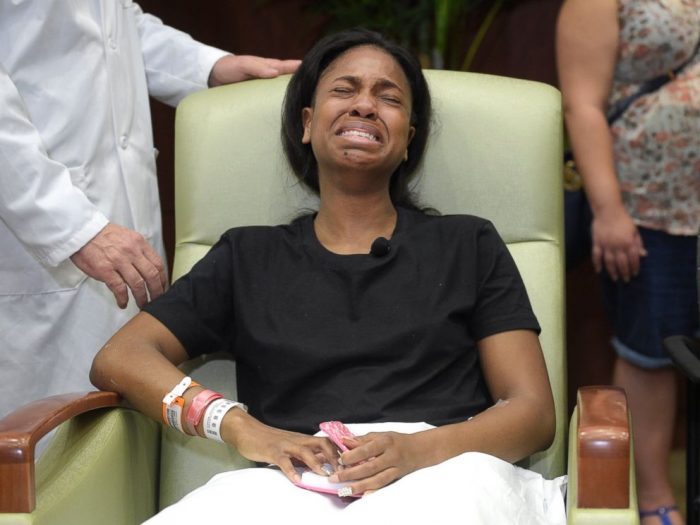 Patience Carter, a victim in the Pulse nightclub shooting from Philadelphia, becomes emotional after giving her story. Last week, one of the country’s largest statewide LGBT advocacy organizations announced its support at Los Angeles City Hall last week for a gun control package proposed by state lawmakers “to make sure another Orlando cannot occur again anywhere, ever…” (AP file photo)

One of the country’s largest statewide LGBT advocacy organizations announced its support at Los Angeles City Hall last week for a gun control package proposed by state lawmakers, and vowed to push for national gun legislation, following the recent mass shooting at a gay nightclub in Orlando.

Rick Zbur, executive director of Equality California, promised that over the next few months, the group will lobby members of Congress and the state Legislature, and put the “full weight” of the organization’s “legislative electoral and education programs behind the lifesaving gun safety and violence prevention laws.”

“We will work to mobilize our 800,000 members and organization’s leaders, and leaders of the LGBT community and our allies, to make gun safety a key LGBT community priority,” Zbur said. “We must act now to make sure another Orlando cannot occur again anywhere, ever.”

Zbur characterized the Orlando shooting as “an act of hate directed toward the LGBT community” and pointed to statistics that indicate people who identify as LGBT are “disproportionately harmed by gun violence.”

Zbur said the Los Angeles-based organization, which has primarily focused on state legislation around LGBT issues, is launching a “Safe and Equal” initiative to push for stronger gun control laws. The group is also known for its endorsements of candidates for local, state and federal offices, and puts out scorecards grading state elected officials’ stances on LGBT rights issues.

The group will be pushing Congress to pass laws that include banning military-style assault weapons and large-capacity magazines, closing background check loopholes at gun shows and requiring stricter background checks and wait periods for gun purchases.

De Leon noted that “the deadliest mass shooting in our nation’s history was a hate crime,” with members of the LGBT community “once again a target of a murderous attack.”

But he made a connection to other communities, saying “this was an attack against Latinos, against African Americans, against immigrants, against Puerto Ricans and Dominicans and other shades of brown at the Pulse club that evening.”

Zbur told City News Service that Equality California had already been tackling the gun issue “in a more modest way … but really what happened in Orlando was a call to action for us.”

“Our community has been grieving over what happened in Orlando,” he said. “It’s really important to direct that energy to things that are positive and that are really going to address what’s going to happen, and that’s one of the things we are trying to do today.”

Forty-nine people were killed and another 53 were wounded in the shooting last weekend at the Pulse nightclub in Orlando, the deadliest mass shooting in U.S. history. The gunman, Omar Mateen, was killed by SWAT officers.

Equality California’s announcement comes after some at Los Angeles City Hall speculated that the shooting will motivate LGBT activists to throw their organizing power behind gun control efforts.

Councilman Mike Bonin said earlier this week that “the LGBT community, I am absolutely confident, is going to be the biggest ally and the biggest shot of adrenaline into the gun control movement this country has ever seen.”

The activists who “chain themselves to the White House and disrupt Congressional hearings because of Don’t Ask Don’t Tell and because of DOMA (the Defense of Marriage Act), are going to work on this issue” by joining with others who have been calling for gun control laws, Bonin said.

Councilman Mitch O’Farrell echoed the organizing call, saying that “if the NRA, if the National Shooting Sports Foundation, if the California Rifle and Pistol Association and the gun lobby in general does not think that we’re going to start going after them and those who aid and abet terrorism across the country by supporting mass killing machines and automatic weaponry and the ammunition that feeds them, then they’ve got another thing coming.”

“Orlando is this generation’s Stonewall and it is time once and for all to do all that we can to make sure this carnage gets under control in this great country of ours,” O’Farrell said.

In a response to the council members’ statements, Chuck Michel, president of the California Rifle and Pistol Association, said the Orlando shooting should not be used as a springboard for politicians to seek over- reaching gun-control laws.

“The response to the violence should be to support legislation and policies that allow for every American to have the chance to protect themselves,” he said. “We cannot continue to let the gun-grabbers use tragedies to push their own agenda without pointing out that it does nothing to increase safety.

“This is why CRPA will not be bullied into giving up the fight to defend our Second Amendment rights,” he said.