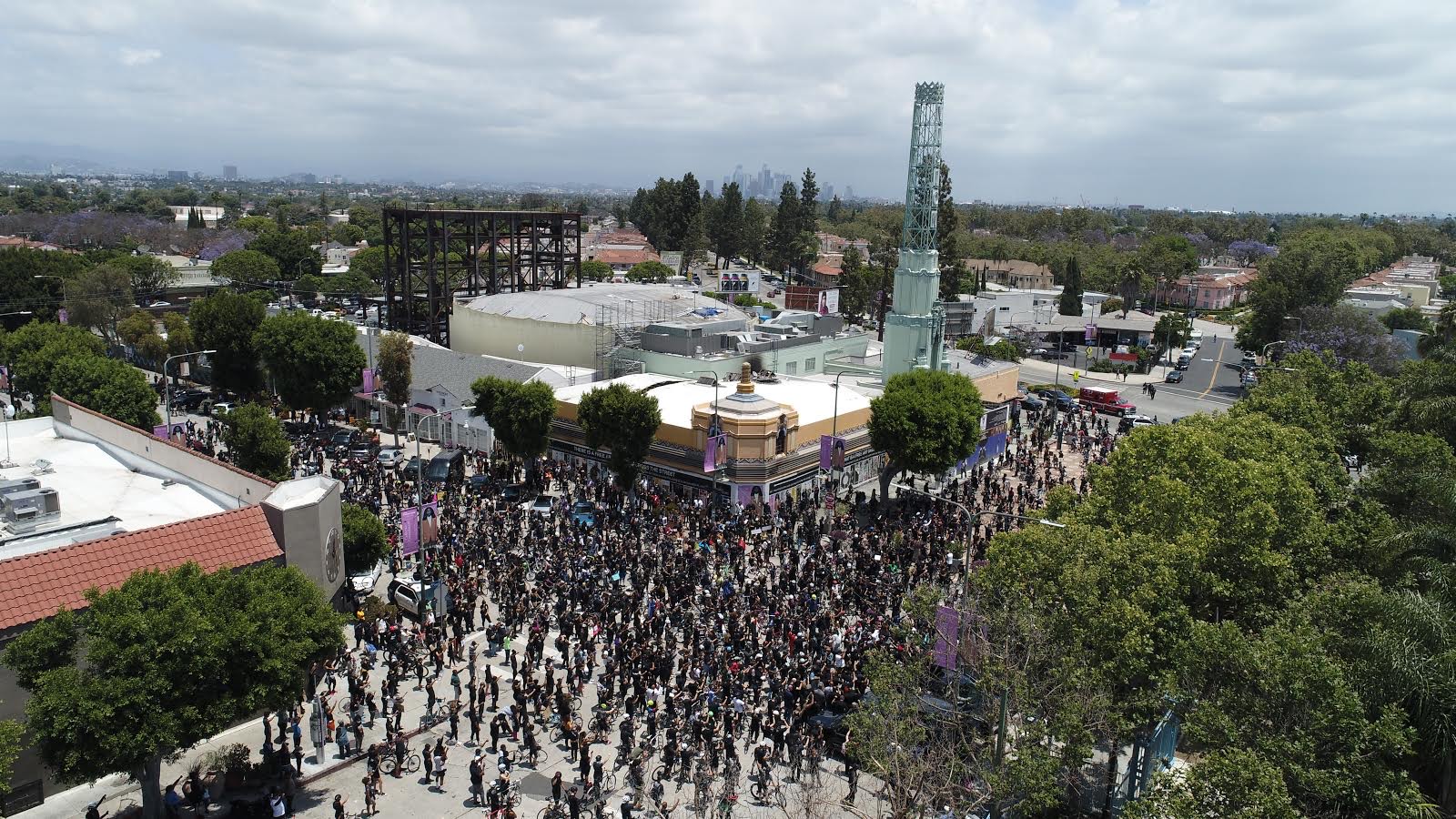 The call went out for 100 Black men. There were over 1,000 people that joined the demonstration. (Courtesy) 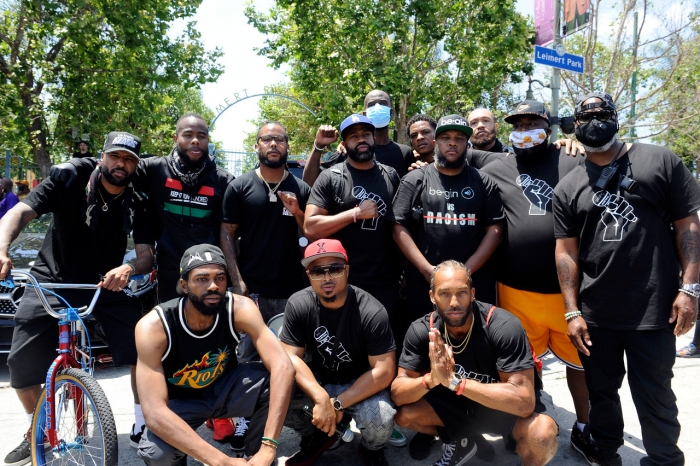 The evening of Sunday, May 31, was the 99th anniversary of the Black Wall Street Massacre. That weekend was filled with peaceful protests throughout Southern California, supplemented by rioting and looting in Santa Monica, Beverly Hills, West L.A. and Hollywood. The uprising took place in the affluent areas and it was a truly multiracial affair. Up to that point, anger and frustration were the dominant emotions and driving force for the uprising. So, that evening, G’Angelo Edmondson put out a call for 100 Black Men (not the organization) to do a peaceful march in the Crenshaw District.

The Black Lives Matter rally the previous Wednesday was attended by many who were fed up with the historical bigotry of America.  Sennett Devermont (@MrCheckpoint_ on IG) and I have led peaceful marches from the Santa Monica PD station to the Venice LAPD Substation that previous Thursday. I was brutalized by LAPD Metropolitan Division at the BLMLA rally at Pan Pacific Park on Saturday, and participated in a peaceful demonstration in Santa Monica earlier that Sunday. 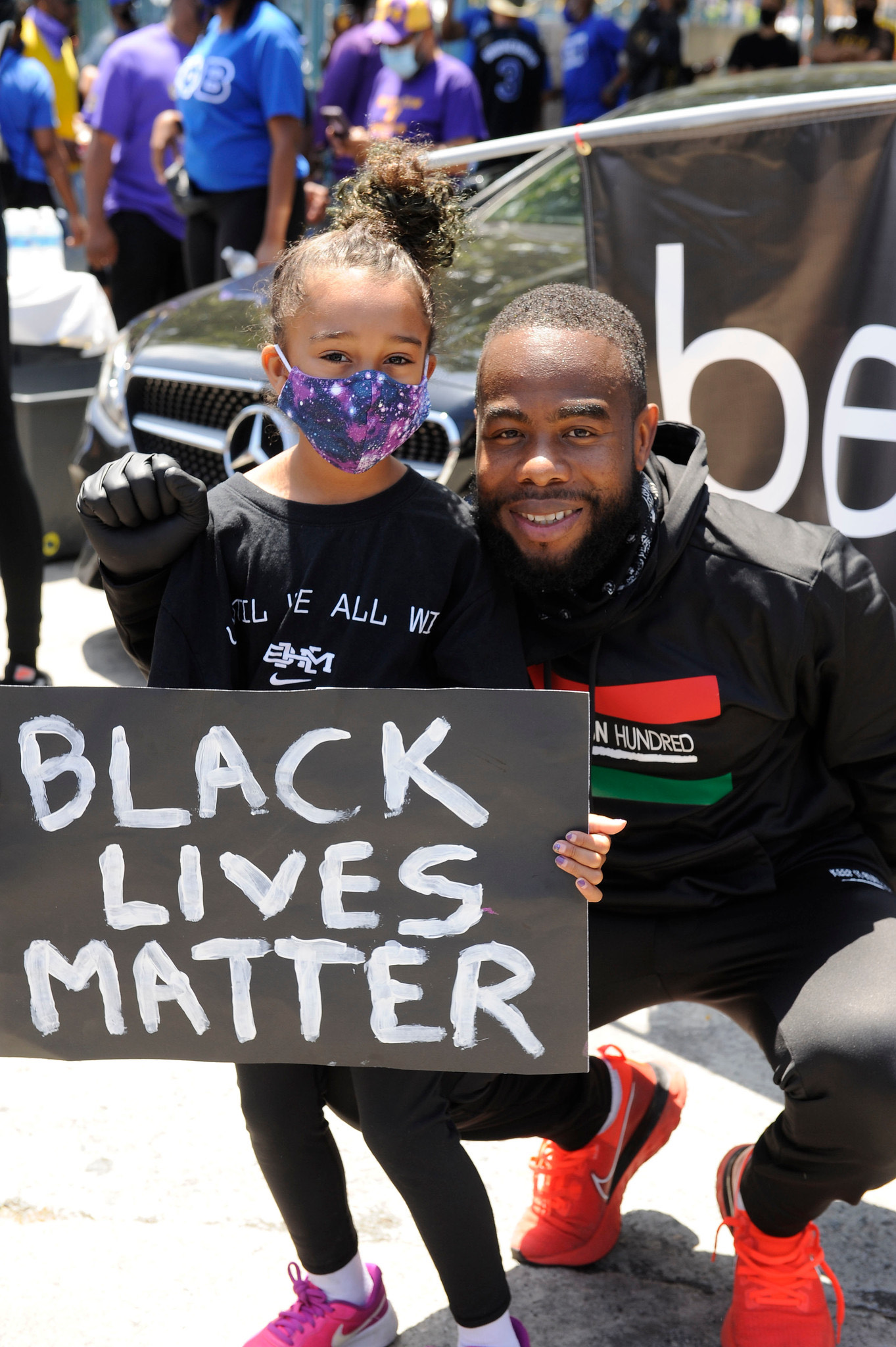 Keep It RunHundred founder, Alrick ‘Butta’ Augustine poses with a you demonstrator (Courtesy)

As the Social Justice Chair of 100 Black Men, Los Angeles, Inc., the call for 100 Black Men drew me in immediately. While on the line with Gee (an organizer), learning his vision, I text some participants from my podcast, We Knot For Cell; they all got on board. The Leimert Park Legend, Dom Kennedy also agreed to participate and help organize.

Gee connected with Kortel Autrey’s organization, Bikes Over Bangin.  There was a plan to make the demonstration a bike ride but we decided to do both.  I led the march portion. while Gee led the bike ride. We agreed this would not be a protest, but a demonstration of love, by and for Black men, though we would not be excluding anyone. We agreed, we didn’t want to alert the police because we wanted to show the community that we are disciplined enough to keep ourselves in check. We also agreed, we didn’t want to blast it too publicly as to ensure this would be by and for Black people.

To be clear, we all agreed it was beautiful to see so many whites, Asians, LatinX and others out protesting for Black Lives. As such, no one was expressly excluded, but with so much turmoil going on, we felt it necessary to create a safe space for us, Black People, to be able to love on each other and heal each other. It was the same spirit that encourages Black people to go to an Historical Black College or University (HBCU).

We had daily phone calls and sent hundreds of texts and DMs every day to get the word out. @aDJCalledQwess agreed to bring the sound and DJ, WKFC member, James Johnson, brought the generator and we had T-shirts printed up for our respective organizations. On Tuesday, Alrick (Butta) Augustine immediately decided his group, Keep It Run Hundred would be participating.

That Wednesday, as organizers, we met in person and went business-to-business, introducing ourselves and sharing the plan. There was real trepidation by many of the business owners in the beginning, but once we revealed ourselves, most were fully supportive, though some feared we would bring destruction to our community. Some seemed upset that we didn’t ask permission but we felt we didn’t need to. 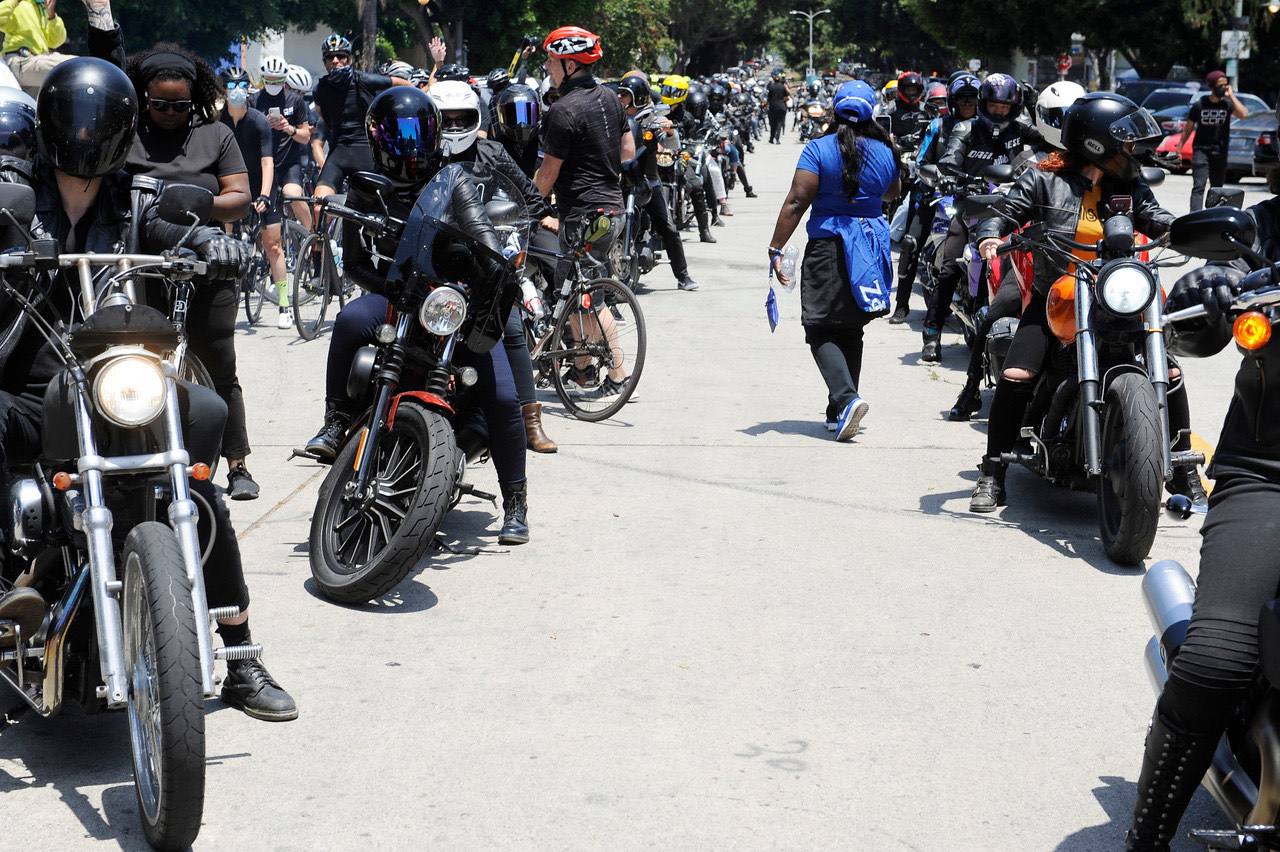 A group of motorcyclists show solidarity with the demonstration. (Courtesy Photo)

By Thursday, Butta had about 400 RSVPs for runners, the Black Bike community was abuzz, and the LA Times had interviewed Gee for a story that came out on Friday. We still had some logistical issues, like restrooms and water, but the Divine 9 organizations, without being asked, took care off all of the water. Tony, from Hot and Cool Café, allowed participants to use his restroom. Everything came together divinely.

Because Gee’s family has run Edmonson’s Ivory Coast Salon, located at 4279 Degnan Boulevard, a business in Leimert Park for over 30 years, the Southwest LAPD Officers were familiar with his family and reached out to them. LAPD offered their services to block streets and we accepted. We want to be clear; we did not request their presence but we do want to point out that how they helped facilitate, is exactly how we want police to operate. Figure out what the people want and help secure it, as opposed to trying to control the people.

Finally, Saturday came and by 10 a.m., the Black Greek orgs were out in full force. Qwess got the music going and the Vibes were at an all-time high. They elevated even higher once the runners started coming down the hill and joining us. The previous day, a sister, Dime Jones, organized a community clean-up on Florence and Western and they brought their extra waters and bullhorn for us to use at the Demonstration. (Side note: when they are looting Beverly Hills and Santa Monica, yet cleaning up and peacefully assembling in South L.A., that’s confirmation change is upon us.) And then the bikes started rolling in.

By 12 p.m., there were over 1000 people at Leimert Park with us, topped off by over a group of motorcyclists who came in formation on Degnan from Hot and Cool to MLK, Jr. Boulevard. That was a very powerful sight. As we started our program, I introduced Gee, who shared his vision. The WKFC member RJ Lewis did the opening prayer, followed by an 8 minute and 46 second moment of silence, with our fists in the air for the purpose of remembering George Floyd, Breona Taylor, Ahmaud Arbery, Jamaal Michael Simpson and all the others lost to racial violence. That was a powerful sight, and by that time, Councilmembers Curren Price and Herb Wesson, and LAPD Chief Michel Moore and Deputy Chief Regina Scott represented in a display of solidarity, holding their fists in the air with the rest of us.

After the moment of silence, the bikes took off, followed by the runners, and then, walkers. TK’s Go Carts brought their train out and played some wonderful tunes for the marchers, including Michael Jackson’s ‘Man In The Mirror” and Public Enemy’s ‘Fight the Power’, as the group chanted the names of those fallen, as well as several other chants including, “Love, “Unity” and “We gon’ be alright, cause we gon win this fight.”

The bikers were flanked by several LAPD motorcycles and the vibes on the bikes was so high, people were dapping the officers who were pumping their fist in solidarity and truly showed love. 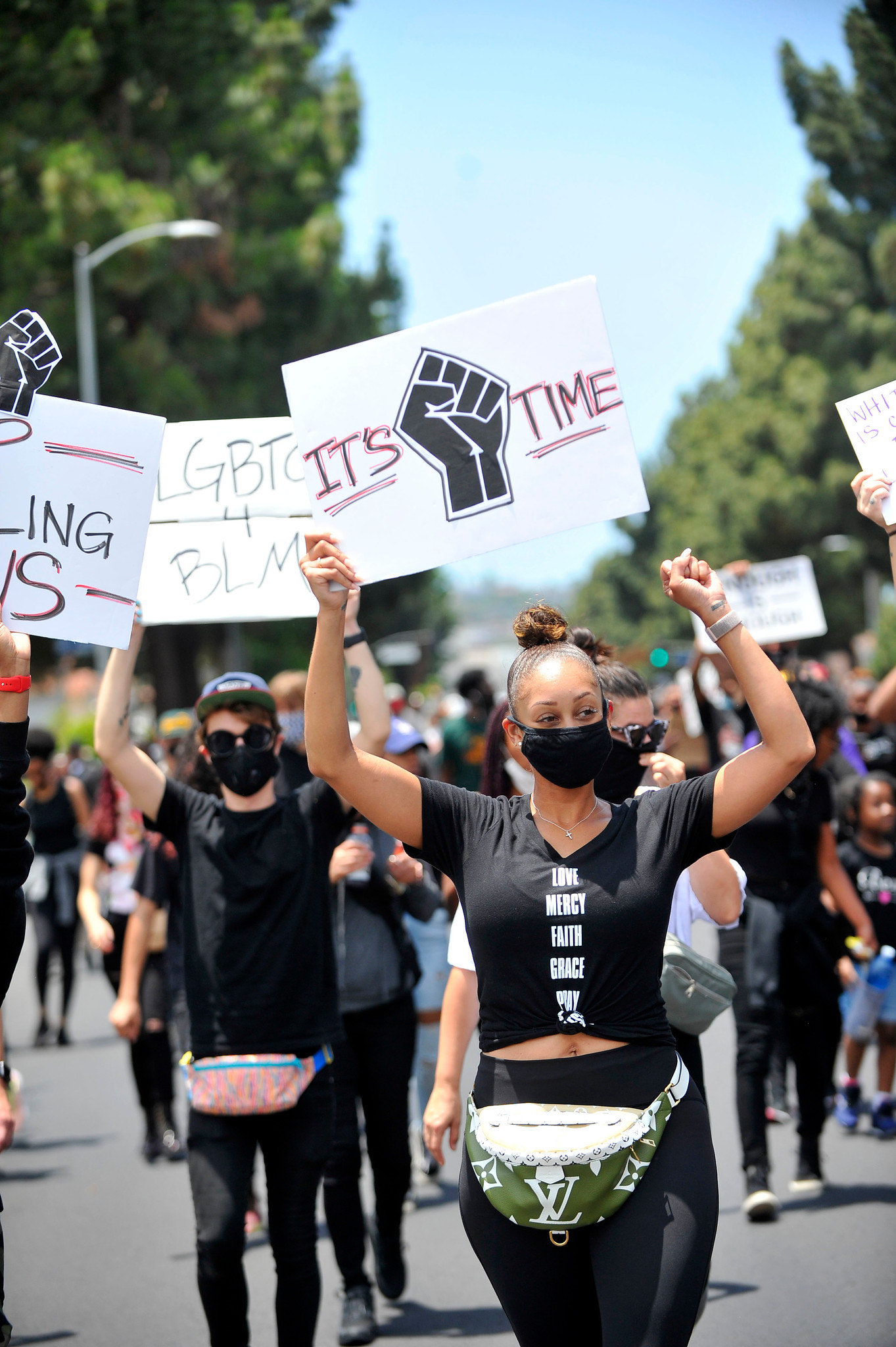 Founder of Love and Mercy and the mother of two Black men, Desireé LeSassier’s, shows her support while marching. (Courtesy)

Once we arrived back, we saw Councilman Marqueece Harris-Dawson had arrived and we started our rally, which began with Tuff Crowd Entertainment’s Halla, Isaiah Jaay and Eric Lloyd performing a powerful piece, singing “We gon fight, til we get it right…” and “We demand respect, cause for over 400 years they had their knees on our neck.”   The performances were followed by a series of speakers, including Gee, Kortel, Butta, and myself. We made clear our purpose and plan which included:

And the most important two for building our strength as a community, 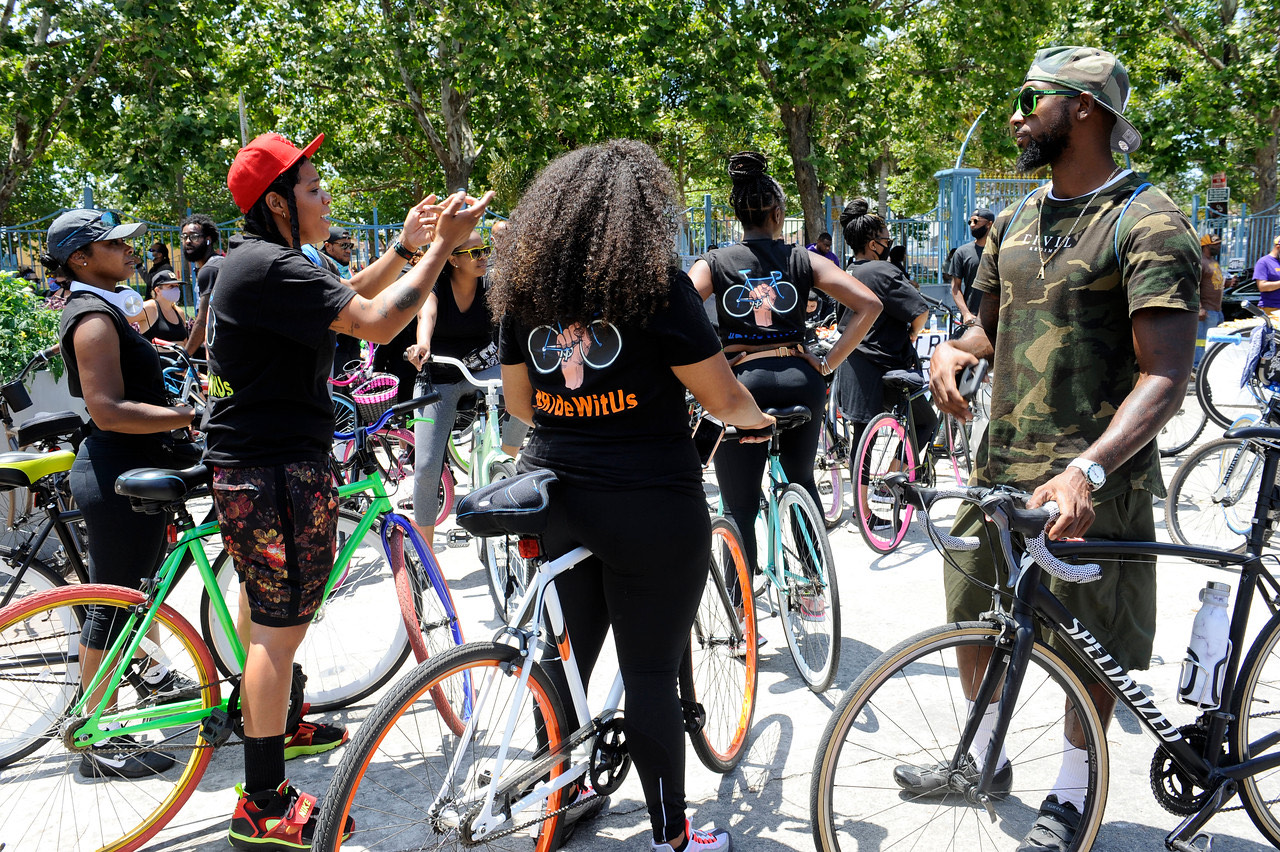 We ended the way we began, in prayer.  Saturday was a Beautiful Day! All around, the demonstration exhibited the best of what our community can be. Gang members searched the crowd for other gang members for the purpose of letting each other know, from this day forward, they would be allies and not enemies. Police hugged citizens, taking pictures and recognizing each other’s humanity.  And best of all, all the Leimert Park businesses experienced a spike in sales that day.

This was not a protest, this was a much-needed day to fill each other with love, and that is exactly what happened. 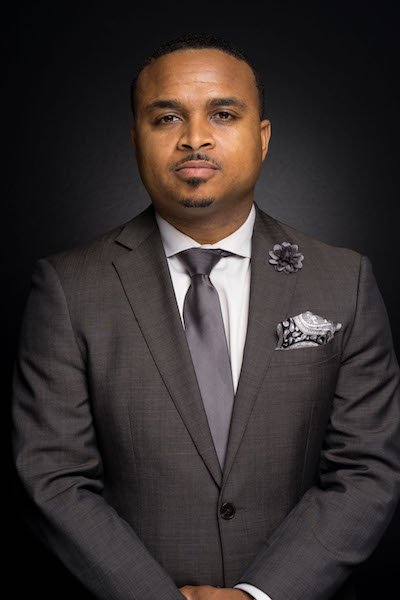 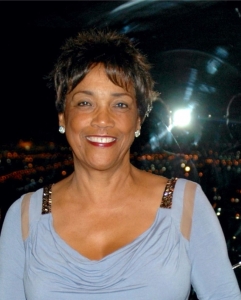